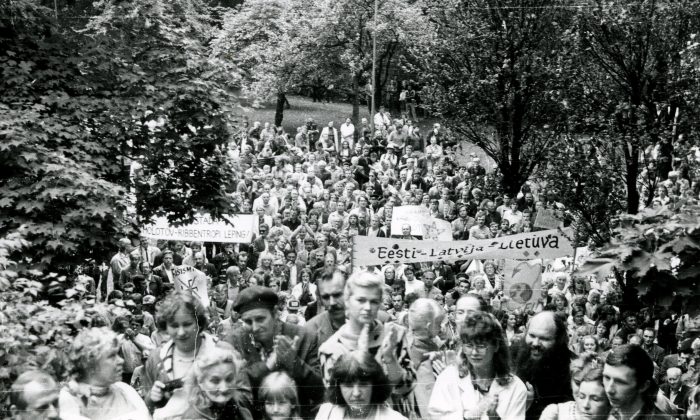 On Aug. 23, 1987, 2,000 to 5,000 people met at Hirve Park in Estonia on the anniversary of the Nazi-Soviet Pact. It was one of the first organized public demonstrations against the Communist Party. (Courtesy of James Tusty)
The Dead End of Communism

How Estonia Sang Its Way Out of the Soviet Union

TALLINN, Estonia—He was one of thousands of courageous youth who gathered back in 1987 at Raekoja Plats, the town square of Estonia’s capital, Tallinn, to sing forbidden patriotic songs, to unfurl the national blue-black-white flag, and to march to the Tallinn Song Festival Grounds. Sten Weidebaum was there to protest the nearly 50 years of communist occupation by the Soviets.

“It was a movement toward a joint dream that gathered strength and boldness day by day and that resulted in major gatherings of people,” said Weidebaum, now communication manager of the Estonian Song and Dance Celebration Foundation, in his Tallinn office in May.

The Singing Revolution was a series of spontaneous singing events and concerts held nightly in the three Baltic countries of Estonia, Latvia, and Lithuania, between 1987 and 1991.

At the time, Soviet troops were everywhere. Nobody could imagine a military conflict with the Soviet Union, or that a country so huge could ever fall apart, Weidebaum said.

Singing patriotic songs and wearing national costumes were the only ways Estonians knew to resist their suppressors and to feel as close to freedom as possible. Singing bound them as a nation, fortified them psychologically, and assured their politicians (there were three prevailing parties in Estonia at the time) that the people were behind them.

“This tradition [of singing] … kept up our culture and language, because Soviets did everything [they could] to make our language disappear,” Weidebaum said.

The most amazing thing to me was not that Estonians survived Stalin, but that they survived 50 years of Soviet education.
— James Tusty, American film director

After World War II, in which Estonia lost a quarter of its population, Stalin began to settle ethnic Russians in Estonia as a means of further subjugating the country.

“The most amazing thing to me was not that Estonians survived Stalin, but that they survived 50 years of Soviet education, and somehow the desire for independence never left them. They never lost sight of their hope,” said James Tusty, an American film director who chronicled the demise of communism in Estonia in his 2006 documentary “The Singing Revolution.”

Tusty, whose Estonian father immigrated to America in 1924, together with his wife Maureen, were amazed by the little-known story of the Singing Revolution. They only learned of it while teaching filmmaking to university graduates in Tallinn from 1999 to 2001.

The couple made the film because they realized that the Singing Revolution played a critical role in the collapse of the Soviet Union. Moreover, it is an inspirational story showing the power of the human spirit.

For Tusty, the Singing Revolution triumphed because the Estonians consciously used nonviolence in a politically strategic way.

“The greater story behind the Singing Revolution is actually timing,” he said.

But when Mikhail Gorbachev came to power in 1985 and promoted the policy of “perestroika,” with its openness and freedom of speech, Estonians saw a chance to resist. Gorbachev was softer than Stalin, and they took advantage of that.

Because the Estonians knew they were walking on thin ice, they tested resistance. Their first protest in 1986, attempted without first gaining permission, was for environmental reasons and not for politics. When protesters saw that Soviets did nothing in response, they continued breaking the law by one inch every day.

In the first days, 10,000 to 20,000 people walked more than three miles to the Tallinn Song Festival Grounds, where the national song and dance festival (Laulupidu) has been held every five years since 1869.

Often, Soviet authorities would break up the spontaneous concerts by turning off the electricity and saying they were over.

Eventually, Estonians held concerts every night, singing the songs of composers like Alo Mattiisen and Tonis Magi, whose song “Koit” (“Dawn”) became a symbol of freedom.

People continued the concerts even after the Soviets banned them. More and more people came every night to sing these songs, with thousands of people singing in plain view of Soviet police.

“By the time Gorbachev understood what was happening, it was four years later, and they [had] moved up a mile,” the film director explained.

The culmination of the Singing Revolution was in September 1988, when the national song festival celebrations in Tallinn were attended by a record 100,000 people, and politicians openly called for independence during the event.

“Gorbachev didn’t understand the implications of his policy: He was a firm communist and had no intention of communism collapsing. But he was naive about what happens when you give people free speech.”

“At that point, there was no turning back. It was just a matter of time, before Estonians were free,” Tusty said.

In the late evening of Aug. 20, 1991, Estonia was pronounced an independent state, without a single life lost.