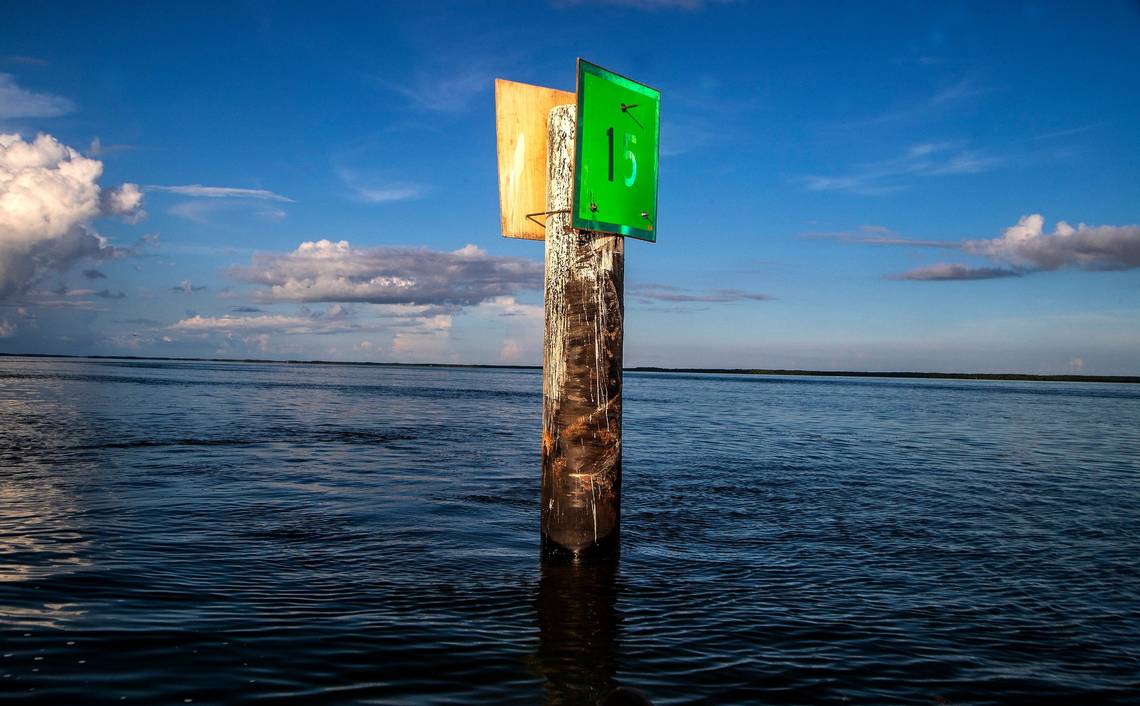 How Do Boaters Avoid Hazards? What to Know About Markers, Buoys, and Other Warning Signs

By Michelle Marchante
From Miami Herald

MIAMI–Just like traffic lights and signs help drivers on the road, boaters have buoys and signs to guide them to and from shore safely.

What you’ll see out on the water depends on where you boat. In the United States, the majority of American waterways use the U.S. Aids to Navigation System or IALA-B, although the Intracoastal Waterway has its own system.

Buoys, beacons, and channel markers serve as the traffic signals of the water.

They can provide directions or alert boaters if they need to slow down, or if there are hazards in the area such as sand bars.

Some of these navigational markers may be green or have green lights, while others may be red or have red lights.

Here are some of the safety markers you might see in South Florida waters:

If you’re traveling by boat, you’ll see navigational aids that mark junctions, forks, or splits in the channel, as well as where the boat should travel to safely pass. The following information is commonly referred to as “Red, Right, Returning.”

“Green colors and lights should be on your right (starboard) side when traveling toward open waters (seaward)” and will always use odd numbers, according to the U.S. Coast Guard’s “U.S. Aids to Navigation System” guidebook. The numbers should decrease as you head to the open water.

“Red colors and lights should be on your right (starboard) side when traveling from open waters (shoreward),” and will always use even numbers, the guidebook states. The numbers should increase as you head to land.

What About on the Intracoastal Waterway?

The Intracoastal Waterway runs along the Atlantic and Gulf coasts of the United States. The navigation aid system used in this waterway is similar to “Red, Right, Returning,” except you need to use yellow symbols.

If following the waterway from New Jersey to Texas, keep the yellow triangles on the right side of the boat (starboard) and the yellow squares on your port, regardless of what color the navigational aid is, according to the U.S. Coast Guard’s guidebook.

This is because some of the beacons, buoys, and other navigational aids you’ll see on the water are used by Intracoastal Waterway and non-Intracoastal Waterway routes. That means boaters might “travel next to each other in opposing directions—and share the same aids,” the guidebook states. “Thus, when following the ICW, navigate by yellow symbols; otherwise, navigate by the color of the Aid itself.”

Hazards and Other Signs

While traveling by boat, you may find other signs, such as:

Diamond-shaped dayboards, which help boaters know where they are. The U.S. Coast Guard says these signs are the nautical equivalent of “You Are Here” markers. You’ll still need to use a nautical chart to figure out where you are.

Sometimes you’ll see orange-and-white navigational aids with various symbols on them. If it has a diamond shape symbol, it means there is a hazard ahead, such as a submerged rock or that it’s a shallow area. A circle means the boat is entering a “controlled area” such as manatee protection zones, for example, which would require boaters to slow down to a certain speed to keep the sea cows safe. Or perhaps you see a sign that says “Idle Speed, No Wake,” and that means the boat operator needs to go at the minimum speed needed to steer.

If the orange-and-white navigational aid has a square, you’ll likely find helpful info, such as directions, distances, and locations to the marina entrance for a state park, for example. If you see a diamond shape with a cross, get out of there. No boats allowed.

What About at Night?

The U.S. Coast Guard says navigational aids can only be identified by their light characteristics at night. This includes:

Boaters are also required to use lights from sunset to sunrise or when it’s hard to see, such as in rain or fog, to help other boaters figure out how far away each of the vessels are from each other and where the boats are going. Make sure to turn off all other lights on your boat that may interfere, or cause confusion, with navigation lights.

“Whenever you see a red navigation light from another vessel, give way. It is the stand-on vessel … it has the right of way,” according to the guidebook.

“If you see both the red and green sidelights of another boat, it is coming straight toward you. You should take action to change course in order to avoid a collision.”

What Other Navigational Aids Should I Know About?

There are a lot of rules boaters need to know, though the “Rules of the Road” can vary depending on whether you’re boating inland or on international waters. The rules also include how to handle common situations such as overtaking, meeting head-on, and crossing the bow of another boat.

Similarly, there are a lot of other navigational aids boaters might see out on the water. To find more information about markers and the rules of the water, visit USCGBoating.org.

For a summary of Florida’s boating laws, visit MyFWC.com.