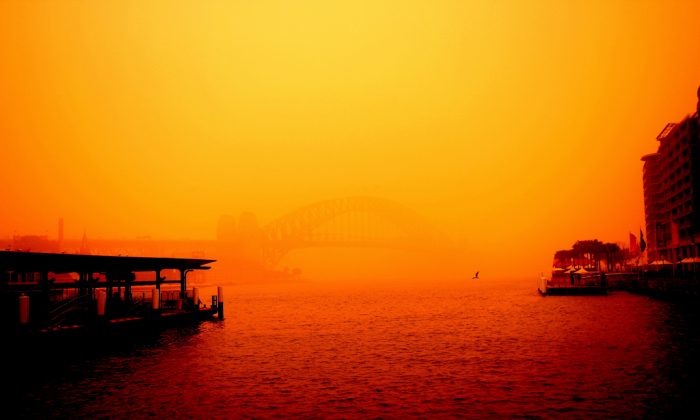 One proposed way of dealing with climate change includes fertilising the oceans with iron. This “geoengineering” would encourage the growth of microscopic plants – phytoplankton – which, if growing vigorously enough, remove carbon dioxide from the atmosphere.

If they’re not eaten, these tiny plants fall to the ocean floor, storing carbon for long periods of time, although we don’t yet know how this might affect ocean ecosystems.

This process in fact happens naturally when dust blows from the land to the ocean, particularly from deserts such as the Sahara and Patagonia. But although dust storms are frequent during the Australian spring and summer, and Australian dust has a high iron content, witnessing the oceans bloom has proven elusive.

Now, however, armed with satellite data, we’ve recorded phytoplankton blooming, almost certainly due to Australian dust storms. Our results are published this month in the Journal of Marine and Freshwater Research.

The dust storm season of spring 2009 was particularly active. On September 22 Sydney awoke to a “Red Dawn“. The storm continued into the following day.

The dust from this storm likely originated in the southern Lake Eyre Basin in central Australia, in South Australia and in western and central New South Wales. It was the largest dust storm (in terms of visibility reduction) to pass over Sydney since records began in 1940.

During and prior to the “Red Dawn” event, winds of 80-100km/h were recorded in the western part of NSW, and elevated dust was recorded at numerous Dustwatch stations across New South Wales on September 22 and 23. The storm affected visibility in Brisbane and as far north as Cairns.

An estimated 2.5 million tonnes of sediment was lost off the Australian coast in a 3,000-kilometre-long dust plume, making it the largest loss of soil from the Australian continent ever reported.

This dust blew out over the ocean, where it was deposited on the Tasman Sea, aided by rainfall. There was a second event in mid-October 2009.

Our research shows the two dust storms that traversed the south-east coast of Australia caused a widespread spike in phytoplankton biomass in the Tasman Sea. This was especially so south of the Tasman Front (at around 32 degrees south), where the East Australian Current veers east from the Australian coastline.

Interestingly, although the “Red Dawn” event of late September was one of the largest on record in terms of total soil loss, the biological response was almost as strong following the less intense mid-October event. This suggests the timing and mode of delivery of dust-derived nutrients are critical.

A previous 20-year study of dust storms suggested that it is unusual for dust storms to happen at the right time to cause plankton blooms.

Chlorophyll concentration at the ocean surface is a proxy for phytoplankton biomass, and can be estimated using satellite-based ocean colour sensors (such as NASA’s MODIS Aqua).

Is Geoengineering a Silver Bullet for Climate Change?

Although we do not have observations of iron concentrations in the water, results from other studies in the Tasman suggest that less iron can limit phytoplankton growth south of the Tasman Front, which is indeed where we saw the greatest phytoplankton response.

As a result of global warming, droughts will likely become more frequent and the number of severe dust storms in Australia may increase in the future. There is some evidence that the amount of dust in the atmosphere over the continent is already changing due to enhanced dust storm activity.

Although our data describe a very active dust storm season, they raise the possibility that more dust storms in future may mean more phytoplankton, in turn absorbing more carbon into the sea.