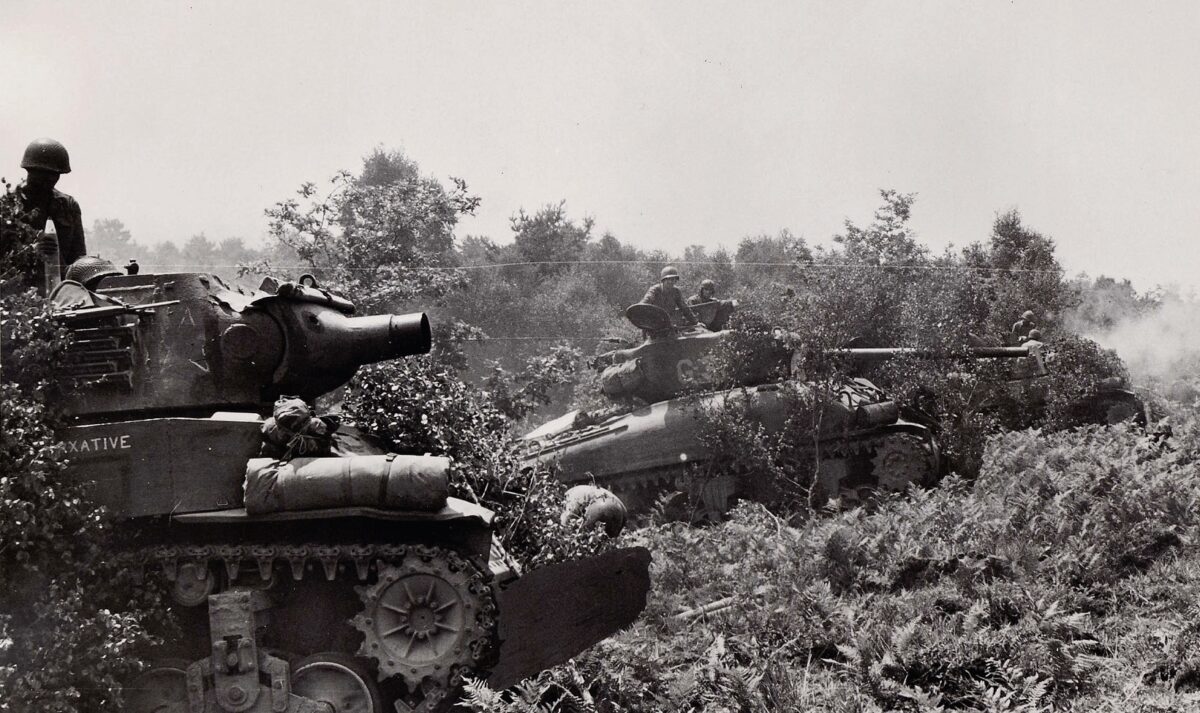 How regular GIs troubleshot and took out German fortifications during the Normandy Invasion
BY Allen Shoff TIMESeptember 16, 2022 PRINT

By the evening of June 6, 1944, American, Canadian, and British forces had carved a toehold on the beaches of Normandy in northern France—the beginning of the end of Nazi domination of Europe. Yet as the Allied soldiers scrambled up the shingle beach and burst over the cliffs and bluffs overlooking the five landing beaches, they ran up against an unanticipated obstacle: the landscape of Normandy itself.

Northern France, like most of Europe, has been continuously occupied by humanity for millennia, and the picturesque, gentle, rolling hills and small, wooded groves of northern France have long been divided into cultivated fields. The terrain as a whole, traditionally called “bocage,” is traced by idyllic sunken lanes, and ancient hedgerows, some centuries old, flank these lanes. Hedges—dutifully and carefully tended by generations of farmers as a natural fence for livestock—can rise 10 or more feet into the air, and the thorny branches and brambles interlace so effectively as to prevent the passage of a determined bull or goat, let alone a man.

But the Germans had prepared for this moment.

Stephen Ambrose, in his seminal work “Citizen Soldiers,” recounted how there were 14 hedge-lined fields per kilometer, each of which met the roads at irregular angles and often had only a single entrance. The Germans had turned many of the tens of thousands of hedgerows in Normandy into veritable fortresses, bristling with machine guns and mortars.

What’s worse, American combat doctrine simply fell apart in the narrow, leafy confines of the sunken lanes between hedgerows. Tanks couldn’t communicate with infantry, and flanking maneuvers or attempts to bypass the strongpoints met pre-sited artillery or mortar fire. Even American air power—by this point ascendant over the bloodied Luftwaffe—proved less effective than expected when faced with the dizzying maze of fields and woods that concealed German positions. It seemed that Allied forces would simply have to slog through.

But the American character—forged in the can-do attitude of the frontier—didn’t lend itself well to resignation. The ranks of the American armed forces swelled with GIs from every walk of life from coast to coast, and without needing direction or commands from officers, they started working the problem from the lowliest private on up. Perhaps it was a New Jersey machinist’s son, or a mechanic from the Bronx, who first thought to weld bulldozer blades to the front of the M4 Sherman, the main tank available to Allied forces. They worked well: a good head of steam down a sunken lane and a Sherman could pierce its way through the hedge, its main turret barking at the German machine gun emplacements exposed in enfilade.

But with bulldozer blades in short supply, and orders out to ship all command could find to the Western Front, the men on the front line had to innovate again. A Sgt. Curtis Culin was credited with developing what amounted to a giant lawnmower blade, the “Culin Cutter,” which he ingeniously crafted from the very Czech hedgehogs—anti-tank steel joists, often fitted with mines—that the Germans had placed on the beaches to foil Allied tank landings.

But while many of the tanks were eventually outfitted with these and other makeshift hedge-cutters, the soldiers needed even more power to defeat the sturdiest hedge fortresses.

Perhaps next it was a miner, fresh from the mine shafts of Idaho’s Silver Valley, who repurposed explosives into hedge-clearing charges. The blasts easily flattened sections of hedge, but Ambrose recounts that while two 50-pound charges could successfully clear a hole large enough for a Sherman to pass, clearing hedgerows in this fashion would take at least 17 tons of explosives per mile, a tall order to swallow even for the well-equipped American forces.

But then, a stroke of genius. Maybe then it was a farmer’s son from Nebraska or Kansas who hit upon the perfect blend of the Culin Cutter and high explosives: welded pipes, several feet long, sticking from the front of the Sherman, like two enormous hay tines. The men developed a system, practiced on field after field: The Sherman would smash into the side of the hedgerow, penetrating deep into the earthen embankment under the hedge, and then reverse, leaving pilot holes almost like you’d find in a mine. The combat engineers would race forward under fire and shove a charge into each hole, sometimes fitted inside empty artillery shells and rammed into the holes like in the barrel of a Civil War cannon. All would retreat to a safe distance and detonate the charges, then rush through the gap, mopping up resistance, followed by a brief respite before continuing forward to the next.

Not only did the men on the ground develop new strategies, but elsewhere the American spirit for innovation refused to resign itself to the slog. Air crews, frustrated at their inability to communicate fully with the boys on the front line, started to experiment with direct radio communication with tanks and their infantry support, bringing punishing air superiority down on the foe with precision. And the logistical wonder of the Mulberry harbors—vast ports and breakwaters transported across the Channel and built in a matter of days after the successful landings—brought a nearly endless stream of new materiel and the fresh men to make use of it. After a few weeks of bitter fighting, the last of the hedgerow fortresses fell to Allied forces, and American-built tanks streamed across northern France in the heady excitement of the breakout from the sea. Paris soon saw liberation, and the crumbling Third Reich’s doom was assured.

In Eisenhower’s famous pre-dawn speech, transmitted to the men about to undertake what he called the “Great Crusade” of Operation Overlord on June 6, he emphasized the “great reserves of trained fighting men” and “superiority in weapons and munitions of war” available to help America and her allies win through to “nothing less than full Victory.” Yet he very well could have pointed as well to the greatest asset of all: the innovative spirit of the American GI, fighting on foreign shores to share with all the gift of freedom.