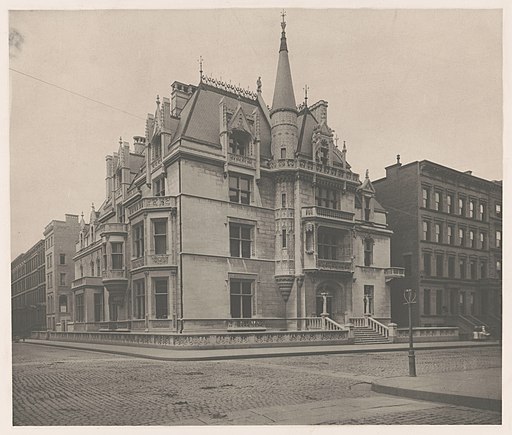 The William K. Vanderbilt House, or “Petit Château,” as it was known, photographed in 1885. （Library of Congress / Public Domain）
American Essence

In 1843, young Richard Morris Hunt and family traveled from America to Europe, where he gained his formal education. Initially, Hunt pursued training in art, but at the encouragement of his family, he took up architecture. Hunt studied under Geneva architect Samuel Darier and later joined the Paris studio of architect Hector Lefuel. In Paris, he studied for the entrance examinations of the École des Beaux-Arts and became the first American to be admitted to the prestigious school. In 1853, Hector Lefuel hired Hunt to help complete expansions to the famous art museum: the Nouveau Louvre. Although he worked in a primarily supervisory role, Hunt collaborated in the design of the Pavillon de la Bibliothèque. Thus, early in his career, he had the opportunity to work on a significant public project. Hunt returned to America in 1856 and took a position with architect Thomas Ustick Walter, who was working on the renovation and expansion of the U.S. Capitol. A year later, Hunt struck out on his own and moved to New York.

His first major project in New York was the 10th Street Studio Building. Hunt would establish his own practice there, and start a school of architecture as well. After a time of professional setback, however, Hunt found himself to be an architect desperately in need of a patron. At that time, Alva Vanderbilt (wife of William K. Vanderbilt) desperately wanted to make her mark on New York society. High society at the time was dominated by the Astors, who considered the Vanderbilts newcomers to wealth, and as such “second rate.” The Vanderbilts were shunned socially by the “society of 400,” which referred to the circle of polite society recognized by Caroline Schermerhorn Astor (and supposedly the maximum number of people she could host in her ballroom). Mrs. William K. Vanderbilt, however, refused to be denied her place in Gilded Age society. Alva, who loved French culture, and Hunt, with his Beaux-Arts background, collaborated to create a magical château amidst the brownstones of Fifth Avenue. Construction began in 1878 and was completed in 1882.

Lewis Mumford, American historian, described the years following the Civil War as a “buried Renaissance” and referred to that historic period as “The Brown Decades.”

The Civil War shook down the blossoms and blasted the promise of spring. The colours of American civilization abruptly changed. By the time the war was over, browns had spread everywhere: mediocre drabs, dingy chocolate browns, sooty browns that merged into black. Autumn had come.

Even men of considerable means, such as J.P. Morgan, lived in unassuming homes. American novelist Edith Wharton described the city as “little, low studded rectangular New York with its universal chocolate-colored coating of the most hideous stone ever quarried,” lacking “towers, porticoes, fountains or perspectives.” Alva Vanderbilt, desiring a house that would lift her social standing, worked with Hunt to create a bit of French Neo-Renaissance whimsy in the midst of the staid brown buildings. Hunt began with a beautifully rendered building that was asymmetrical, with towers and turrets and architectural detail placed for aesthetic joy. Constructed at 660 Fifth Avenue, it was the first of many châteaux that would be built in the Gilded Age of New York.

The house would be a work of art, intricately carved. Hunt chose Indiana Limestone for the exterior walls—a stone that worked beautifully and when smoothly finished glowed in the sunlight. It required an army of skilled artisans to build. The firm of Ellin & Kitson employed 40 stonemasons in the project. The personable Hunt not only worked well with his high-strung clients, but it seems he developed quite a rapport with his artisans as well. A story is told that when Hunt came to the house for the final walk-through, he discovered a large tent in one of the ballrooms. Inside, he found a life-sized statue of himself, dressed in stonecutter’s clothes. It had been carved in secret by the stonemasons as a tribute to the admired architect. William Vanderbilt had the statue placed upon the roof above the front door.

In March 1883, Alva hosted a dress ball for 1,200 people that captured the public’s attention. The affair is said to have cost $3 million. From Fifth Avenue, guests would enter the 60-foot-long grand hall, walled with stone, and were entertained in the grand home’s formal rooms. Just off of the hall was the library with its French Renaissance paneling. There was the salon, designed and built in Paris by Jules Allard and featuring a secretary-style desk previously owned by Marie Antoinette. At the end of the grand hall was a Gothic 50-by-30-foot banquet room. Austrian sculptor Karl Bitter carved the mantle details for the room’s massive double fireplace. The house was a fitting showcase for Gilded Age opulence and excess, and of course it inspired the building of many more. Not to be outdone, Caroline Astor commissioned Hunt to build the J.J. Astor château at 34th Street and Fifth Avenue.

The great urban châteaux enjoyed but a fleeting moment in the sun. Had they been anywhere but New York, the great metropolis that continually reinvents itself, these magnificent houses might have found another life—perhaps as offices for charitable foundations. After New York recast itself as a hub of railroads, during the turn of the century, rising real estate values would doom them. In less than 50 years, the grand homes were torn down to allow greater density construction on their sites. Alva’s “Petit Château” was sold to a real estate developer in 1926 and demolished the next year. Though the beautiful buildings of Indiana Limestone may no longer be seen in New York, George Vanderbilt’s mansion, “Biltmore,” in Asheville, North Carolina, remains as a monument to the era.

Richard Morris Hunt became a member of influential society with his distinguished career in design. He went on to design great public buildings that are still erect today, including the Metropolitan Museum of Art, the pedestal for the Statue of Liberty, and the New York Tribune Building. Later in his life, Hunt designed the Administration Building for the 1893 Columbian Exposition in Chicago. In this great collaboration with Frederick Law Olmstead, he gave America the richness of Beaux-Arts design. Today, the site of Alva’s château is occupied by a 39-story building constructed in 1957. Extensive renovations in 2022 will create a bright commercial and office space with 11-by-19-foot, single-pane glass windows. The architecture of New York has continued its reinventions through the decades.

Bob Kirchman is an architectural illustrator who lives in Augusta County, Virginia, with his wife Pam. He teaches studio art to students in the Augusta Christian Educators Homeschool Co-op.