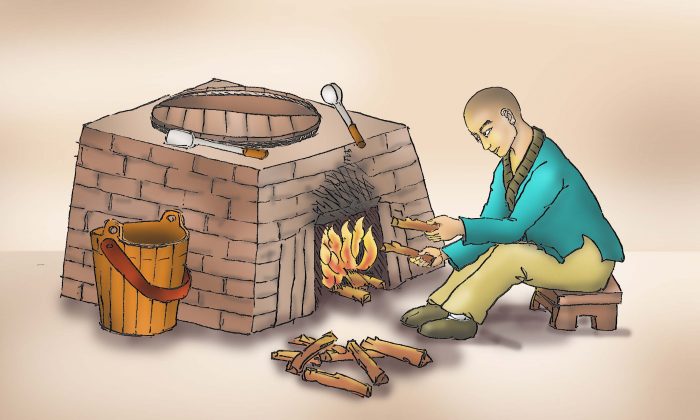 The young monk had to do chores like fetching water, making fire, cooking, and cleaning every day. (Illustration by Sun Mingguo/The Epoch Times)
Chinese Culture

How a Young Monk Became Enlightened

On a mountain was a temple that housed a group of monks. Among them were an old monk and a young monk. Whenever the old monk went down the mountain to beg for alms, the young monk would follow him. The two of them were together wherever they went.

The young monk had become a monk at a tender age and had been following the old monk in his spiritual practice. He had to do chores like fetching water, making fire, cooking, and cleaning every day, but it did not bother him. In fact, he enjoyed doing them.

One day, the young monk was sweeping the floor when all of a sudden he looked at the temple’s Buddha statue, and a thought struck him: “I’ve been chanting the sutras and meditating with the old monk every day for many years. What exactly is Buddha?”

He put down the broom, went to the old monk’s room, and asked him what Buddha was. The old monk said amiably, “Buddha is a person who has become enlightened. He does not get corrupted in a filthy environment. Neither does he get annihilated in a disaster. He moves without using his legs, and he shines without the use of any light.” (A Record of Buddha in the Various Dynasties – Volume 5)

The young monk was elated. He asked, “How can I attain Buddhahood?”

The old monk smiled and replied: “Do good but not evil. When you do not harbour any thoughts, you will have attained Buddhahood.”

The young monk said: “Master, I’ve heard that a long time ago. Will you teach me by sharing your experience with me?”

The old monk asked him, “Tell me, what have you been doing every day?”

The young monk thought for a while and said: “For example, when we go to the town to beg for alms and people vilify you, you do not let it bother you. I followed your example. When someone vilifies me, I do not let it bother me, either. You help others. I also bring joy to others by helping them.”

The old monk sighed. “I teach you Buddhism, but I’m not asking you to follow my example. You may be able to imitate my mannerisms and behaviour, but can you emulate my mindset?”

The old monk told him to face the wall and meditate. A day went by, and the young monk was still meditating. Suddenly it occurred to him that nobody had delivered any food to him. Perhaps the old master had forgotten. He did not get upset and decided to bear the hunger and continue with his meditation.

But the following day, again nobody delivered any food to him. The young monk thought: “Master is testing my patience and training my perseverance. Master is so caring. All the more I mustn’t become resentful.” He had to be even more hard-working to repay his master.

The old monk was observing him from outside the room. The young monk showed no anger. The old monk nodded his head and smiled. “Good. He is not distracted, and he does not look at others’ mistakes. That’s why he’s able to stay focused.”

The old monk asked him to end his meditation and said: “You do not bear a grudge against others even towards a trivial matter. You can be of one mind. Come with me.” The young monk lost no time in following the old monk out.

The old monk led him into a meditation room. There was a bowl of rice, a cup of tea, a monk robe, a pair of chopsticks, and three copper coins on the table. The old monk said to him: “The day before yesterday, you asked me how you should go about cultivating your mind and spreading the teachings of Buddhism. I’m giving you three copper coins. Go down the mountain on your own to beg for alms. You’ll come to understand the meaning of cultivation.”

On his way down the mountain, the young monk met a beggar. He noticed that nobody would give the beggar any food. The young monk thought: “How rare virtues are! Nobody is willing to help him. But I’m just a poor monk who can’t even fend for myself. How should I help him?” The young monk had not eaten for two days. He felt sorry for the beggar, but there was nothing he could do to help.

Then he came to an eatery. He bought two buns. He looked at the buns in his hands and thought, “This is not even enough for myself.” Still, he could not bring himself to eat both buns. He decided to give one to the beggar.

Then he thought again. “Life is short and unpredictable. If I don’t help the beggar this time, I might not get another chance to. Nobody will wait for me till I’m ready before they come again. Granted, I’m hungry now, but not being willing to give and share on the pretext that it’s beyond my means is a terrible mindset. I ought to treat my mind.

“It’s only a matter of time before I lose this body of mine that is made of flesh. But my compassion will never be lost.” The young monk no longer felt hungry. Instead, he was filled with brightness and joy. He gave both buns away.

Compassion toward a moth

The young monk was enveloped in serenity because of his Buddha-nature. Before he knew it, he had reached a slope. While he basked in his moment of jubilation, a moth flew toward him, and before he could dodge, it hit his eye. It hurt terribly.

As the young monk bore the pain, he thought: “I’ve taken the vow to attain Buddhahood. If I’m angry with the moth just because it hit against my eye, I won’t be able to reach enlightenment myself, much less save the sentient beings. Not only must I not bear a grudge, I also need to pray for the moth. I hope it doesn’t get injured.”

As he became appeased, the pain subsided too. His heart was once again filled with jubilation and brightness. “The moth is here to help me attain Buddhahood. If I get hurt by insects again, I must accept it as a fact and be thankful to the insects, as they were here for me.”

The old monk had been watching the young monk from afar and observing his every thought. He knew the latter had fully understood everything in life. When you are compassionate, you will put the sentient beings above everything else. When nothing obstructs your mind, you will have the motivation to keep striving hard in cultivation of the mind.

The young monk returned to the temple and bowed to the old monk. He said: “Master, I’ve come to understand a few things. If I run into a beggar, I should give him food. If I see a poor man, I should give him money and clothes. If I meet an injured man, I should help him in a timely manner. Everything I have is for the benefit of the sentient beings, and I’m ready to give them up anytime.”

His words filled everybody with admiration, but the old monk kept quiet. He wrote “not a redeeming feature” on a piece of paper and walked out.

Everybody started whispering among themselves. The young monk was puzzled. It was a day filled with brightness and joy. Why did Master say he did not have a single redeeming feature? He started to use his wisdom to interpret the situation again. “Master has always been benevolent, especially towards me. Is it because I said something wrong?”

He recalled his mindset and attitude when he spoke to his master, and all of a sudden, he realized something. “I kept emphasizing my feelings. Master is not angry with me, but testing me. He doesn’t want me to just talk like Buddha. I have to truly be able to deliver it.”

As he recalled what he had said, he came to realize something. “It may seem that I’ve done nothing wrong, but my mind was not pure. I wanted everybody to know how benevolent and kind I was, and how much I’ve attained in Buddhahood. That’s not the way to go. The moment I start to be full of myself and my mind is no longer pure, I have “not a redeeming feature”.

The old monk was in a quiet corner nodding his head. “The young monk’s thoughts are pure. He is able to dismiss distracting thoughts at all times and put compassion above everything else. He qualifies for the pure land of Buddha.”

At that moment, what the young monk saw before him was no longer buildings in the mortal world, but the illuminating land of Buddha, and that he was sitting on a lotus and rising.