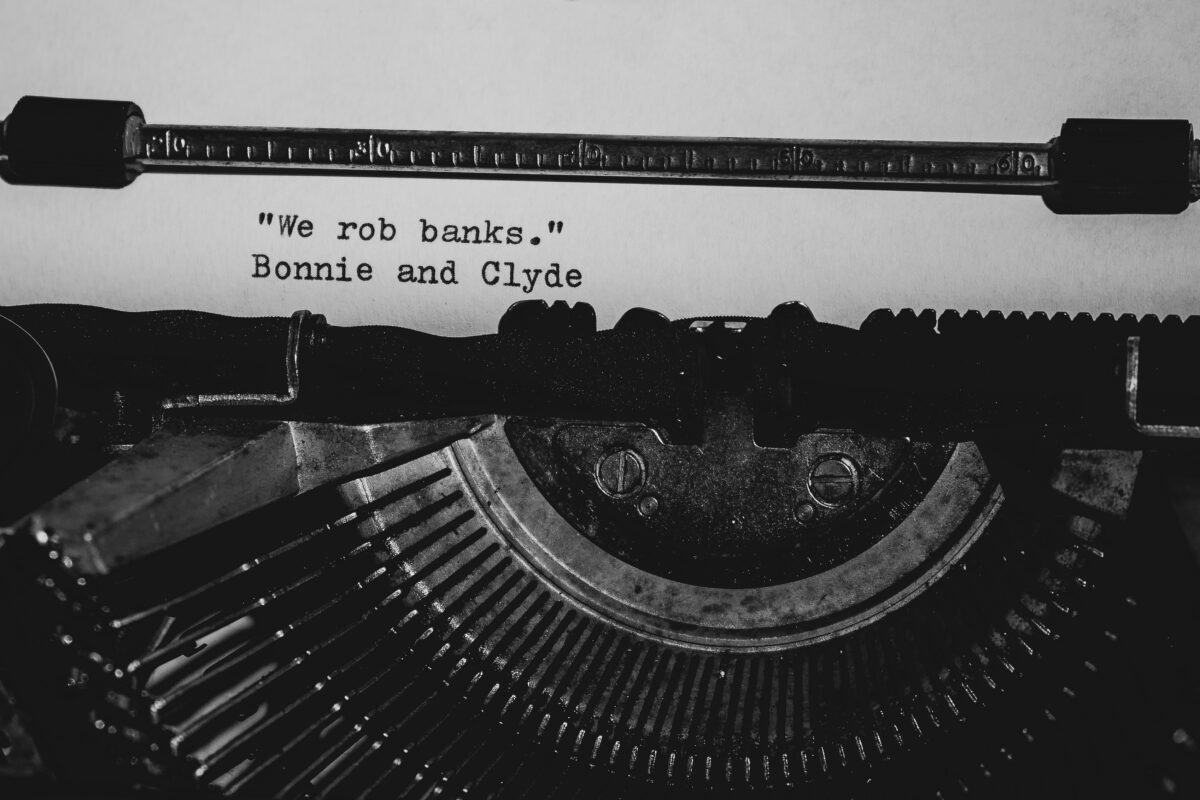 Texas lawman Frank Hamer stopped a lot of criminals over his long career before he confronted the infamous Barrow Gang
BY Taylor Hensel TIMEApril 11, 2022 PRINT

Frank Hamer was once asked how he felt about the 52 gunfights he was alleged to have participated in throughout his 45 years as a Texas lawman—and the 30 dead men these violent clashes accounted for.

“The men I have shot down have all been criminals in the act of committing a crime or resisting arrest,” Hamer replied. “I’m hired to do that work. It’s my job. I do it because I have to. I don’t like to talk about it or think about it. It’s something to be forgotten.”

Ironically, because of Frank Hamer’s reputation as a skilled and ruthless man-hunter, he can’t be forgotten.

Born in 1884 in West Texas, Franklin Augustus Hamer was destined to be a man of action. He originally wanted to be a preacher, but he quickly realized he felt most at home outdoors. He was also fascinated by stories of the Comanches, reading as much as he could about this tribe while pestering local old-timers for stories of their exploits. “I resolved to be as much like an Indian as I could,” Hamer later said.

Iron-tough even at 19, Hamer was also fiercely principled. In 1903, while working as a horse wrangler near San Angelo, Texas, Hamer refused neighbor Dan McSween’s offer to pay him $150 to kill another rancher McSween was feuding with. Hamer took this one step further. He warned the unsuspecting cattleman that McSween was gunning for him.

McSween, enraged, took his revenge Lone Star style, dropping Hamer with a shotgun blast. Hamer was saved by a black field hand who helped get him to a doctor before he bled to death. This caused Hamer to become extremely sympathetic to the black community. He would stand up for them when most Texas lawmen would not.

Career of a Lawman

At age 21, Hamer joined the Texas Rangers, rapidly earning the respect of fellow officers. Still carrying scars from McSween’s shotgun blast, Hamer ended the career of murderer Ed Putnam in a gunfight at a bordello in December 1906. After taking a leave of absence from the Rangers in 1908, Hamer moved closer to his family in East Texas and became marshal of Navasota, an oil boomtown noted for its violence and racism. The town needed a tough lawman who was also capable of great compassion and understanding. Hamer filled this role with aplomb.

One night, Hamer arrested a white man attempting to conceal a firearm. Despite being offered a bribe by the offender’s wife, Hamer insisted on seeing justice carried out. When the man’s wife said, “Oh, Mr. Hamer. I can tell you are mean. That’s a white man!” Hamer replied, “Yeah, that’s what’s the matter with this town: white. I’m a white man but I’m doing my job. … But he can’t get out with no amount of money that you offer me. ’Cause money don’t buy me.”

Hamer remained marshal of Navasota until 1911 then spent several years as a special investigations officer in Houston and a livestock detective in West Texas.

In 1915, Hamer again wore the badge he most preferred, that of a Texas Ranger. As the Ku Klux Klan became more of a threat, Hamer took it upon himself to oppose their activities, believing them to be no better than a vigilante mob, which Hamer famously hated. Once, Hamer arrested a black man accused of attacking a white woman. When a lynch mob composed of Klan members tried to take the accused man out to hang, Hamer escorted his prisoner from the jail to a waiting car, viciously kicking the Klansmen in the shins with his pointy-toed boots.

The 1930s brought the Great Depression and the Dust Bowl, which served as a backdrop for quite possibly the most iconic and widespread crime wave in American history.

The rise of “super-criminals” like John Dillinger, Pretty Boy Floyd, and the Barrow Gang dragged American law enforcement into the 20th century. Unlike Sam Bass and John Wesley Hardin, these were not bandits who could be chased down using trail-craft and horsemanship. These outlaws had wide-flung networks of supporters within local police departments and the criminal underworlds of Chicago and Kansas City.

In Hamer’s Texas stomping grounds, two kids from Dallas, Clyde Barrow and his girlfriend, aspiring actress and poet Bonnie Parker, were set to remind the Lone Star state why lawmen of Hamer’s caliber were still needed.

Bonnie and Clyde met in 1929 in the slums of West Dallas, where Clyde was a small-time crook, Bonnie a waitress in a local diner. For five years, the “Barrow Gang” tore a bloody swath through the Southwest, ultimately killing 12 people. Unlike other Depression outlaws, the Barrow Gang was strictly smash-and-grab, preying upon gas stations, National Guard armories and the occasional bank. Even so, thanks to Clyde’s big-city style and Bonnie’s considerable charm, they became heroes to the rural poor.

After four years of mayhem, however, two 1934 incidents put the Barrow Gang out of favor with the public. On January 13, Clyde and Bonnie raided Eastham, the work-farm division of Huntsville State Penitentiary. The attack was a revenge raid inspired by the brutality Clyde had experienced there as a prisoner. A guard was killed and only four prisoners were freed, but the raid was a minor sensation, and it caught Frank Hamer’s attention.

Enraged by the audacity of this raid, Lee J. Simmons, Texas prisons superintendent, contacted the 49-year-old former Ranger, who was semi-retired and living with his wife Gladys and their children in Dallas. According to Hamer, Simmons gave him free rein to handle the situation however he saw fit: “I want you to put them on the spot, and shoot everyone in sight,” Simmons told Hamer.

For this particular manhunt, Hamer employed the relatively new detective science of psychological profiling. “I interviewed many people who knew [Clyde] and studied numerous pictures of him and Bonnie,” Hamer said. “An officer must know the mental habits of the outlaw, how he thinks, and how he will act in different situations. When I began to understand Clyde Barrow’s mind, I felt that I was making progress. … Before the chase ended, I not only knew the general appearance and mental habits of the pair, but I also had learned the kind of whiskey they drank, what they ate, and the color, size, and texture of their clothes.”

The second incident occurred on April 1, Easter Sunday. Bonnie, Clyde, and gang-member Henry Methvin gunned down two Texas Highway Patrolmen, H.D. Murphy and Edward Wheeler, outside Grapevine, Texas. Murphy was only 22 and engaged to be married. Reportedly, his fiancée wore her wedding dress to his funeral.

“Bloody Easter” horrified Texas and the nation, turning the Barrow Gang from rambunctious kids fighting “the system” into renegade killers who needed to be stopped by any method.

Frank Hamer was more than willing to provide those means. By May, he had assembled an impressive posse: Maney Gault of the Texas Highway Patrol; Dallas deputy sheriffs Ted Hinton and Bob Alcorn; and Bienville Parish, Louisiana, Sheriff Henderson Jordan and his deputy Prentiss Oakley. Hinton had befriended Bonnie while she was waitressing in West Dallas. Jordan and Oakley were meant to represent the area of Louisiana where Barrow and Parker had been spending most of their time, thanks to their close friendship with the Methvin family. Henry’s father, Ivy Methvin, however, was tired of his son’s involvement with Clyde and Bonnie. Methvin approached Jordan and cut a deal: if Ivy agreed to set up Barrow and Parker for Hamer and his posse, Henry would be shown leniency. Jordan brought the deal to Hamer, who agreed. Methvin collaborated with Hamer’s men to ambush the couple.

The posse assembled along a country road outside of Gibsland, Louisiana early on May 24. After two hours’ wait, they heard Clyde’s approaching Ford V8 sedan. Concealed in the woods bordering the road, the posse stood in a line, weapons ready. Barrow was driving and Bonnie was eating a sandwich in the passenger seat as the duo approached Ivy Methvin’s jacked-up truck. The ruse worked. Clyde slowed the car to see if Methvin needed help. Just before Hamer could step out and demand Barrow’s surrender, an overly excited Prentiss Oakley jumped up and fired a burst from his Remington automatic rifle into Clyde’s head, killing him instantly. As Clyde slumped against the steering wheel, his foot slid off the brake and the car began to slowly roll forward. Bonnie screamed, and she grabbed for a Colt automatic pistol resting in her lap. All the lawmen, including Hamer, opened fire. In 16 seconds, 167 rounds riddled the stolen Ford, tearing into Barrow and Parker. According to Ted Hinton, “when all was said and done, they weren’t nothing but a bunch of wet rags.”

Hamer lived another 21 years following the death of Bonnie and Clyde, but it remained his career’s defining moment. Far from a gun-slinging cowboy caricature, Hamer was first and foremost a peace officer. To his mind, Barrow and Parker needed to be apprehended because they were killers and thieves who had broken the law of the land. His actions in ending the pair’s crime spree cemented Hamer’s status and influence as quite possibly the most effective law enforcement officer of the modern American West.

Bonnie Parker wrote numerous poems during her time with the Barrow gang. Below is an excerpt from perhaps her best known poem.

of how he lived and died.

If you’re still in need

of something to read,

here’s the story of Bonnie and Clyde.

Now Bonnie and Clyde are the Barrow gang

I’m sure you all have read

how they rob and steal;

and those who squeal,

are usually found dying or dead. …

They call them cold-blooded killers

they say they are heartless and mean.

But I say this with pride

that I once knew Clyde,

when he was honest and upright and clean. …

and rent them a nice little flat.

About the third night;

They don’t think they’re too smart or desperate

they know that the law always wins.

They’ve been shot at before;

but they do not ignore,

that death is the wages of sin.

Some day they’ll go down together

they’ll bury them side by side.

To few it’ll be grief,

to the law a relief

but it’s death for Bonnie and Clyde.