How a Perilous Sahara Journey Ended in Faith, Strength, and Courage 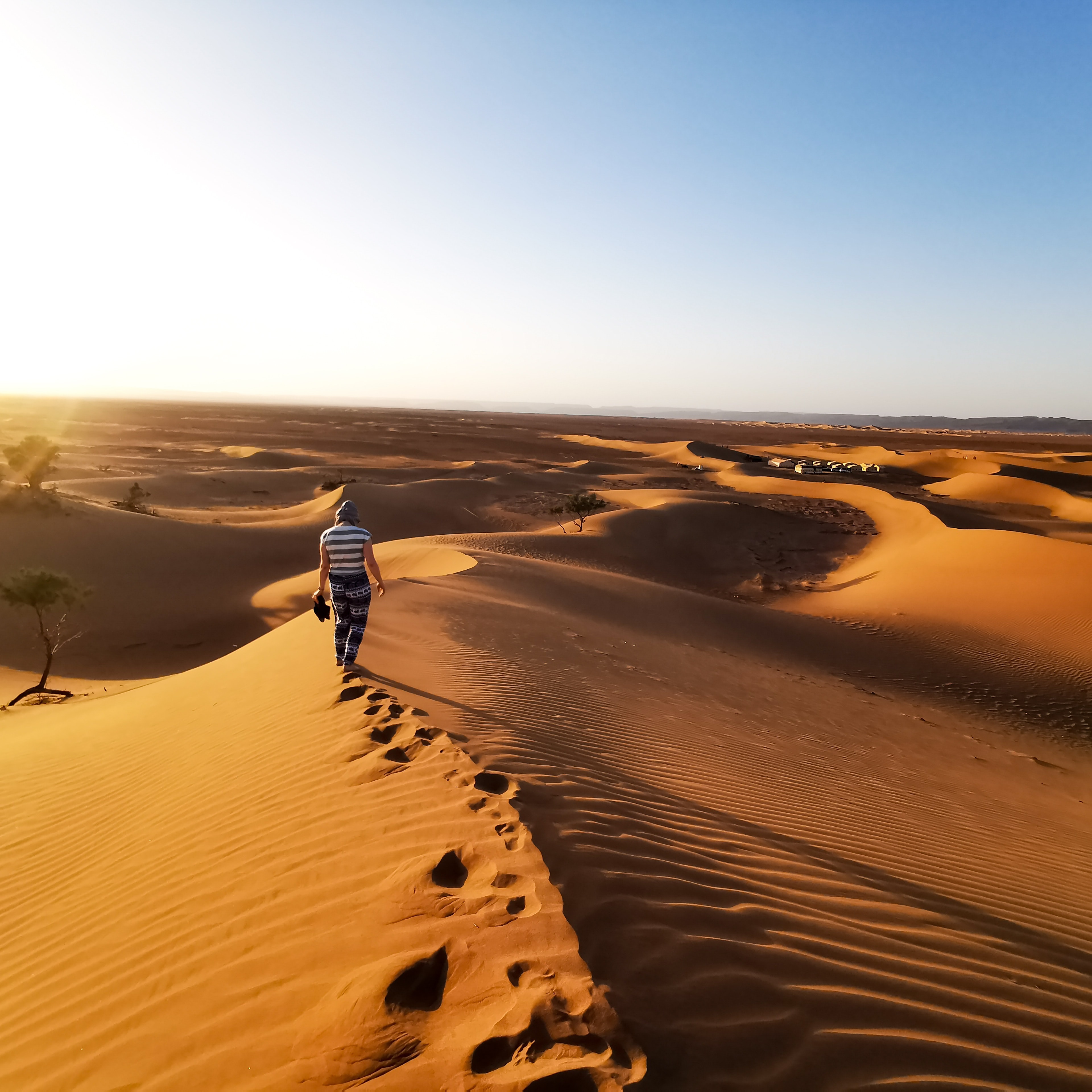 British model Kristina Hurrell dunked her head in the pool of water just steps ahead of her, frantically trying to shake out the countless insects that had dropped into her hair when she took a garden shortcut. Only upon lifting her head, did she see the nearby Brigitte Bardot, nakedly emerging from a swim.

It turned out that the traveling companions to whom a new friend of Hurrell’s had introduced her were the celebrity couple Brigitte Bardot and Gunter Sachs. While trying to rekindle the couple’s relationship, Sachs arranged a vacation tour in North Africa. As a successful, jet-setting high fashion model and an adventurer at heart, Hurrell was tempted by the prospect of photographing the iconic Sahara, which weeks before was featured in a set on one of her modeling jobs.

Playing buffer to the catty couple was far from Hurrell’s ideal vacation, but the promise of adventure beckoned. On previous occasions, she had explored the Amazon rainforest after a job in Brazil and followed up a Dior shoot in Cambodia by running off to capture photos of monks outside some endangered temples—while the region was on the brink of war. These kinds of excursions were what she remembered more than modeling. The idea of taking the sort of photos on her North African excursion that National Geographic would notice was too tempting—Hurrell agreed.

Little did she expect that Sachs would abandon the quartet early in their trip, that a Bedouin sheik would invite Hurrell to photograph and travel with his tribe, that she would experience a strange ritual, or that she would fall ill with typhoid fever and dehydration while making her way out of the desert.

“It’s been sitting on the back burner of my life for quite a while,” Hurrell said of the story. Hurrell, who is the CEO of SpaFari, travels constantly, but lockdowns last year put a pause on that. And in the lull, she decided to finally dredge up her desert memories.

“I was really sitting with the memory of each thing that happened,” she said. Many events between that trip and the present day made Hurrell the bold, fearless, courageous person she is, but her experience in the Sahara was really a sort of catalyst, she said. Remembering these things, she even felt inspired to return.

“I really feel that God did protect me in the wilderness, no question. I really did hear His voice,” she said.

The Strange and Sublime

When a charming, young Bedouin sheik asked Hurrell to accompany his tribe for a few days to photograph and document their way of life, her inner adventurer leaped at the chance. Her rational side cautioned her against traveling into the desert alone, with no ability to speak the language, and no knowledge of the land. In the end, she hired someone to serve as a guard and translator and phoned the Dior press officer back in Paris to say that the trip would be four days long. They would send a search party if Hurrell didn’t call back by then.

It was a trying experience. At times Hurrell’s sense of hygiene rebelled at what the nomadic tribe was used to, and being forced to participate in a palm tree climbing lesson was an embarrassment. She was further disappointed by her limited photo opportunities—the tribe needed to warm up to her first, but time was scarce.

And then came the point where Hurrell wanted to leave, but the sheik insisted that she stay. She was separated from her compass and camera equipment, which were held hostage by the tribe, while she went into the Sahara with the young sheik’s father to witness a strange, surreal ritual. She watched as the old man found a cobra, a scorpion, a fennec fox, and more, then hypnotized the vicious creatures one by one before putting them, now docile, into his robe pockets. When they finally returned to camp, the creatures had come out of their entranced states and were biting away at the man’s body, though he was somehow immune to their venom.

Together with her guard, Hurrell broke free from the tribe not long after that, abandoning her compass and precious photography equipment, and letting the stars guide her in what she hoped was the direction of the hotel she had left some days before. She later found that a helicopter was circling the area to search for her, though they never crossed paths. She and her guard soon ran out of water and were left wondering whether they were on the right track.

But the experience was not all horrors.

“There was a moment, there was a night—and I feel like it was only a year or two ago,” she said, “there was a quiet, incredible energy through the sand, a planetarium of stars above the head, and that was just incredible.”

To avoid the midday heat, they traveled largely after sundown, and Hurrell would lean as far back on her camel as she could, taking in the galaxies above her.

“You’re under this amazing expansiveness of stars,” she said. “And it was absolutely, incredibly enthralling.

“And realizing obviously this moment will end—would I survive? Or will I not survive? Will I be remembering this moment?”

Hurrell felt afraid more than once while wandering the Sahara, but her remedy for fear was faith: She asked for God’s guidance and protection, and she felt a divine response.

She compiled what she remembers of her voyage into a memoir, “Captivated,” including how her desert journey ended with healing in both body and spirit.

Hurrell went through about a month of convalescence and, near the end, it became clear that though she was healing emotionally, mentally, and spiritually, her progress had stalled.

“I remember being in the hospital, and needing to come out and get back into the saddle of life,” she said with a big sigh. “And there was this real issue I couldn’t get out of my head.”

It was the feelings of bitterness and resentment that she held for the young sheik who had betrayed her and taken her property, leaving her with no safe passage back. “How could I have trusted this person? And I just couldn’t get it out of my head.”

“And then I really heard God say to me, ‘You’ve got to forgive,’” she said. It took a few days, but Hurrell prayed and found the strength to forgive. And once she did, all the anger that had been holding her back released from her body like air from a balloon.

“It was a trip of a lifetime for me, and it was a catalyst for what continued,” Hurrell said.

With Strength and Noble Character

Hurrell’s perilous journey taught her to choose strength, that with faith in God she was protected, and that she owed it to her Creator to live fully. It also taught her that she is an adventurer at heart. Since then, Hurrell has combined her love of nature, travel, and wellness by leading nature trips all around the globe and helping others find empowerment the way she has.

“I knew one day I would tell my story of how I overcame what I went through in the Sahara Desert, and I hope, and pray, that it will be someone else’s survival guide,” Hurrell said. “Obviously I’m more cautious now, but because I know God’s protecting us. And at the time, I knew God allowed me to take that journey.”

When Hurrell plans hiking trips for her clients, she drops them in the middle of nature, in the most scenic environments she can find. The point is to inspire them, make them feel present, extend their physical limits, and help them tune into themselves. They are often more peaceful after the trips, and “it’s just the light that comes out of their eyes,” she said.

“I always feel—and I say this to all the clients—let’s just be honorable in our life here. Let’s awaken the noble character within us,” she said.

Nobility may not be a commonly lauded trait today, but Hurrell hopes that she and others can pass its seeds with wisdom, love, and compassion—like her grandmother did when Hurrell was a child—to younger generations today.

“You know, we’ve got to live inside ourselves, and if we’ve got to carry ourselves around, it’s got to be healthy and well and peaceful and strong. I like to say stand tall and claim our integrity and truthfulness and morality—all the strong things that I feel people need to retune into,” she said.

“You’ve got to just have courage and faith, and be bold, and be fearless. If you aren’t, it’s just trusting God, and He is strong, and He will do that. I say, what do you have to lose? Open your heart and let Him in. Ask Him to guide you, protect you, direct you—and He does.”