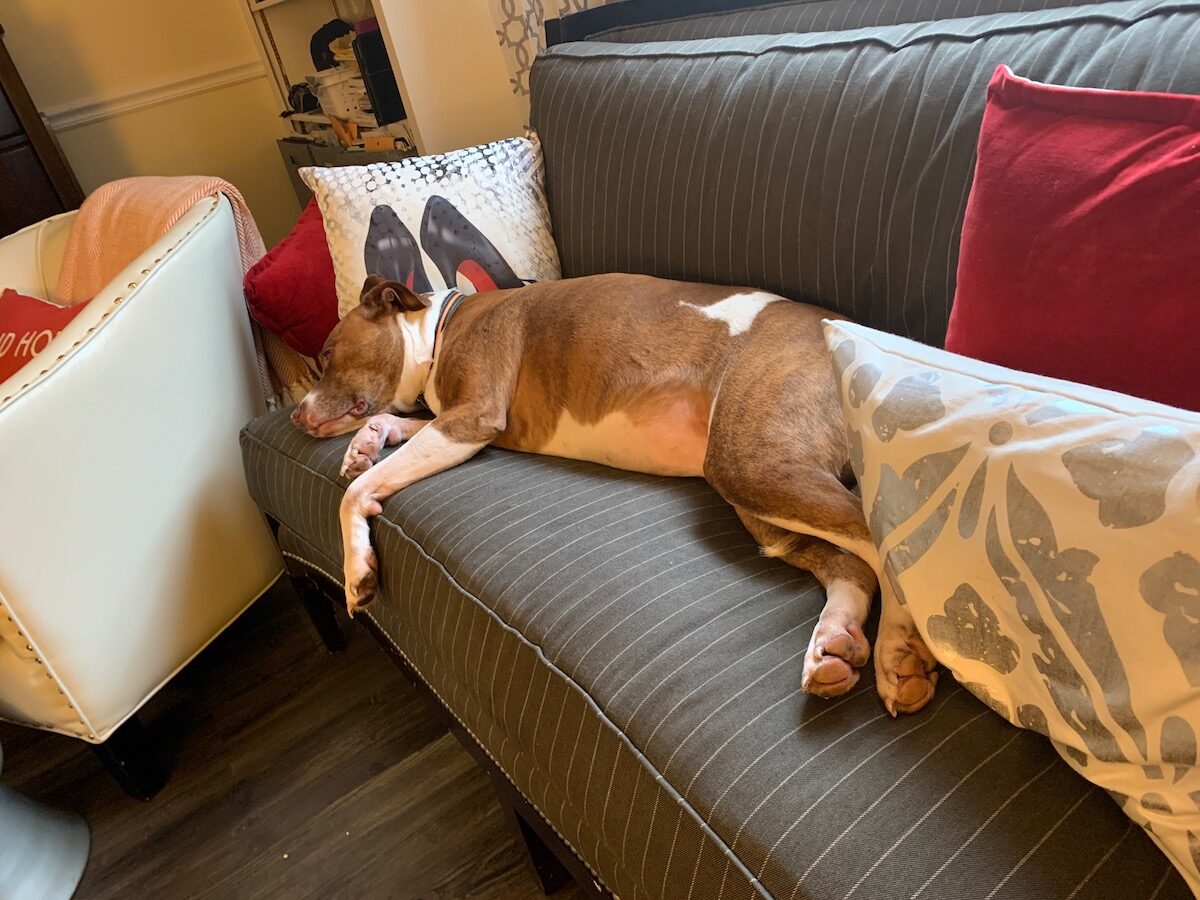 How a Navy Veteran and Abused Pit Bull Saved Each Other

When you adopt a rescue animal, sometimes that animal rescues you. Vincent Veale, a United States Navy veteran, was suffering from clinical depression and post-traumatic stress, and a pit bull in desperate need of a loving home changed his life.

Veale, 59, lives in Wilmington, Delaware. He grew up in the Bronx, and vividly remembers having a good childhood. His father, uncle, and oldest brother were both United States Navy veterans, and he himself enlisted in 1981 at the age of 21.

“The Navy was ingrained in our family,” Veale explained.

Veale served on the USS Nimitz aircraft carrier and was an aviation storekeeper. He was responsible for delivering critical supplies and parts to the aircraft on the ship. What he enjoyed most about his job was being on the flight deck watching planes take off and return from missions. Watching the crew guide the planes in and seeing the pilots land on the aircraft carrier was particularly memorable.

Veale served in the Mediterranean Sea most of the time and had the opportunity to travel to Italy, Israel, Spain, and France. His favorite trip by far was to Paris.

“It reminded me of New York. The subway system, all the places you could eat, the art—to me I was like at home,” Veale said.

While the Navy offered Veale the opportunity to travel, he would have to contend with the traumatic experiences that come with being an active-duty sailor. On October 23, 1983, two terrorists drove truck bombs into United States Marine barracks in Beirut, Lebanon, killing 220 Marines and 21 United States personnel.

The wounded were flown to U.S. ships off of the coast including the USS Nimitz. The trauma of seeing his fellow service members wounded and the misery of uncertainty—it was possible he knew someone stationed at the barracks—took a psychological toll on Veale.

“I didn’t know what was going to happen after that,” Veale explained. “Everything was a question mark.”

Veale kept his feelings to himself and focused on his duties in order to keep his mind off the unknown. Being called to his battle station was particularly traumatizing because there were no windows.

In 1985, Veale left the Navy. He was recently married and moved back to New York, where he worked for Con Edison. His wife didn’t like New York, and the couple moved to Virginia, where he worked for a power company for 16 years. Veale didn’t know at the time that he was suffering from post-traumatic stress, and he found himself acting out and struggling to control his anger.

This led to problems at home and ultimately led to a divorce in 2005. He lost his home and found himself living out of his car for four years. He always had a full-time job, but couldn’t afford his own place because his income went toward child support.

“I had nowhere else to go. I just had my clothes and my car,” Veale recalled.

Veale ultimately found a shelter for veterans but felt isolated from others. He went to the Veterans Affairs hospital, where he was officially diagnosed with clinical depression and bipolar disorder. Two years ago, he was also diagnosed with post-traumatic stress.

His therapist at the Veterans Affairs hospital suggested that Veale adopt an emotional support pet. He contacted an organization called Pets for Patriots that connected him with an affiliate organization called New Leash on Life. The organization rescues dogs in Pennsylvania, and inmates train them to be service dogs.

They brought a dog named Greta to him one day, but she was initially apprehensive to engage with him. She had been abused, and someone had beaten her, likely to force her to fight in the past. Veale asked the organization to bring Greta for a second visit, and this time he was prepared—he brought some food with him.

“I had some hot dogs, and Greta came right to me and sat between my legs. That was the love story right there,” Veale recalled.

Greta has helped Veale deal with his depression and post-traumatic stress immensely. She is always present for him, and just recently she was by his side during a depressive episode when he needed her most.

Greta has also helped Veale connect with others in his community since he needs to walk her three times a day. Initially, he would try to walk past people. However, they would stop and praise Greta, and now he has become more comfortable interacting with them. She has helped him cope with his emotions immensely.

“She can feel what I’m going through without me even saying anything,” Veale said.