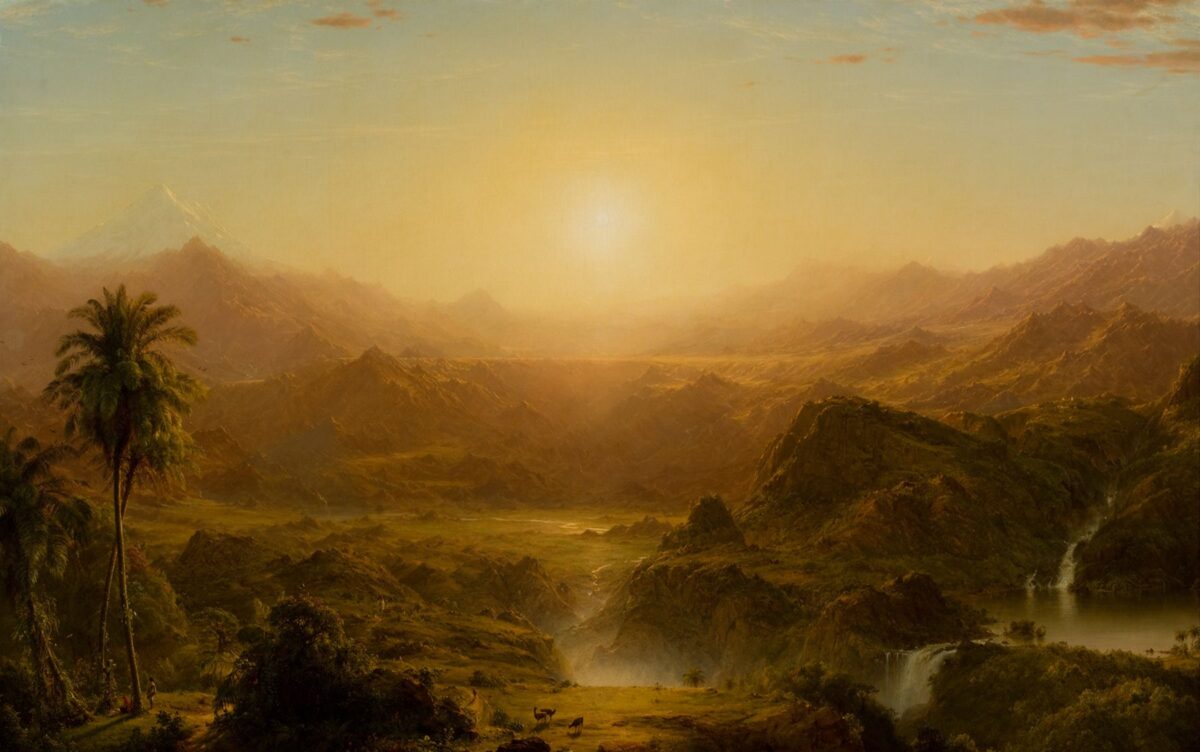 The story is told of a moment in the North Carolina mansion of Richard Joshua Reynolds, American businessman and founder of the R.J. Reynolds Tobacco Company. One of the family’s small children was staring intently at an extremely large canvas in the family parlor. His mother asked him what he was admiring in the painting. He responded: “I’m looking at the church.” Indeed, he was staring at “The Andes of Ecuador,” a painting by the great artist Frederic Edwin Church. Thinking the child had become aware of the great artist at such a tender age, she joined him in examining the artwork—only to discover the red-tile-roofed chapel that was a tiny detail in the vast painting. That was the “church” the child was drawn to. Frederic Church’s epic paintings ended up in the grand homes of wealthy patrons, who probably missed much of the detail in the paintings they had purchased. The sheer volume of subtly rendered detail probably required “a little child [to] lead them” (Isaiah 11:6). Truthfully, Church was a very spiritual person, and his work reflected a sense of the unseen hand behind the scenery he so beautifully rendered.

Frederic Church learned much from Prussian naturalist Alexander von Humboldt, who had written about South America and encouraged painters to go and capture the beauty of the New World. Humboldt was one who valued field sketches in his own work, and Church took that to heart. In his own travels, he would make many small “preparatory works.” He never did his large canvases plein air (on-site in the open air) but rather constructed and completed the works from his copious field studies. Working slowly, he would usually complete one of his large canvases in the course of a year. His smooth, luminescent skies are the result of his smooth, patient blending of layers of oil paint. He frequently painted the golden glow of morning or evening.

Church began painting in a time when most great thinkers still beheld the hand of God in Creation. As his contemporaries viewed “The Andes of Ecuador,” they felt as though they were looking at the fresh work of the Divine Hand. David C. Huntington, American art historian, commented on the Andean landscape:

“Like Adam at the dawn of human consciousness the beholder awakens to the beauty of the earth which has been so long preparing for him. Yet this first awakening is, in effect, the type for a reawakening into a higher consciousness, which is the consciousness of a soul reborn in Christ, as with fresh eyes he ‘sees all things new.’ The old dispensation is manifest in the guise of the church and wayside shrine, each marked by a cross. The new dispensation is manifest in the guise of a heavenly cross whose all-pervasive radiant light blesses and hallows all nature. As the crosses made by human hands adumbrate the cross made by divine hands, so has the sequel of ever higher orders of life through aeons adumbrated the mind-spirit which now, for the first time, contemplates Creation with ‘Intelligence.’ As he ‘soars’ suspended between earth and heaven in the presence of Andes of Ecuador and looks out upon the world’s divinity, the spectator becomes a ‘demi-god.'”

Frederic Edwin Church was born on May 4, 1826, in Hartford, Connecticut. His family was wealthy and provided ample opportunity for him to pursue education. It was at the Hartford Grammar School that his artistic talent was noticed; he was asked to teach a drawing class at the age of 15. The next year, Church studied with two local painters, Benjamin Coe and Alexander Emmons. Church’s father Joseph was friends with an art patron named Daniel Wadsworth. When Frederic expressed his desire to pursue a career in painting, Wadsworth wrote a letter of introduction for him to the great Hudson River School painter Thomas Cole. At the age of 18, Church became Cole’s pupil, living on Cole’s property in Catskill, New York.

Cole taught the young man for two years, infusing in him a great wealth of various techniques and color palettes. He underscored this training with a vigorous instruction in the art of sketching. Most importantly, he allowed the young artist to absorb his belief in the great power and beauty of the natural world. Church’s early work was quite similar to Cole’s, and he even titled an 1844 work “Ox-Bow (after Thomas Cole).” It was Church’s interpretation of a scene Cole had also painted. As the Hudson River School developed, Church’s own style emerged. Luminism, a style of painting that emphasized light in the portrayal of scenery, led Church to paint with smooth, barely noticeable brush strokes. He began to paint very large canvases (6 to 8 feet wide) in that smooth, sublime style.

Initially, Frederic Church painted the Hudson and surrounding mountains, as well as other New England scenes. British art critic John Ruskin said of these works, often painted in twilight or dawn’s golden glow, that they implied “[God’s] own immediate presence as visiting, judging, and blessing us.” Ruskin believed landscapes to be the ideal manner of expressing spiritual intent. Church certainly developed this metaphor, but unlike earlier 19th-century painters, he did not create allegorical works as such. He preferred to develop his painting with a subtle human presence, often barely visible, which invited the viewers to step into the vast paintings and make their own discoveries. Church was inducted into the National Academy of Design in 1848 as its youngest associate. After settling in New York, he took his first pupil, William Stillman. Church would leave his studio in spring and travel all summer, often by foot. Every winter, he would return back to the studio to paint and sell his work.

Unlike many young artists, Church had the means to travel. The vast scenery of the West called to him, as well as the “wild” landscapes of places like Katahdin in Maine. He would often travel to remote locations with a group of his male friends, making numerous studies and sketches while camped out on location. These trips would typically last for months. From his many studies, he would complete his large canvases when he returned to his studio. It was not uncommon for him to spend a year completing one of his large works. He was a keen observer. When he painted Virginia’s Natural Bridge, he captured the fine elements of the rock arch so that all who are familiar with it today recognize minute details of the great natural wonder.

As Church developed significant patronage, his paintings sold for very high prices. One patron, Cyrus West Field, sought to develop business ventures in South America. In order to attract investors, he financed Church’s travels there. Church actually made two trips to South America, in 1853 and 1857. In 1859, he exhibited the painting “The Heart of the Andes.” Five feet high and almost 10 feet wide, the painting was shown in a frame with drawn curtains covering it. Art enthusiasts were charged admission and were given opera glasses in order to take in the painting’s details. The room was darkened, and the painting was uncovered and spotlighted to heighten the drama. The artwork was a great success, and it sold for $10,000—the highest price ever received by an American artist at the time. Church would show his large works at the annual exhibitions of the National Academy of Design, the American Art Union, and the Boston Art Club. He shared the stage with such luminaries of the Hudson River School as Thomas Cole, Jasper Cropsey, John F. Kensett, and Asher Brown Durand.

Frederic Church married Isabel Carnes in 1860. He bought a farm in Hudson, New York, and built his “Cosy Cottage,” a relatively modest home, as a retreat for his family. Church’s life was changing—and the world around him was changing as well. In the 1860 painting entitled “Twilight in the Wilderness,” Church’s landscape reflects the great turbulence of the country that would erupt in the Civil War. Church did not travel during the war years. While he himself did not serve, he lost a close friend in the conflict. His two children died of diphtheria in March 1865. When the war ended, most everyone in the country had been touched by the tragedy. Thomas Jefferson’s Capitol Building in Richmond rose above a scene of desolation—a desolation that spoke of the fragility of civilization.

In the aftermath of the war, Frederic Church became fascinated with the study of past civilizations. In 1867, he made a pilgrimage to Jerusalem and the Middle East, traveling with his family. His sketches and studies there and later in Europe allowed him to paint large canvases—one a year for the next few years. These paintings were not the pristine natural scenes he composed early in his career; they were the portrayal of the ruins and artifacts of ancient civilizations. He studied Persian architecture and the Greek and Roman ruins. They became the subject matter for a new set of works that departed from the innocence of his earlier work.

According to Kenneth Meyers, curator at the Detroit Institute of Arts, “Church painted six major paintings, basically one a year in the years following his trips. “Syria by the Sea” (the fifth painting), unlike some of his earlier ones, is a totally made up landscape. Church combines architectural ruins that reflect early Greco-Roman ruins, late Roman ruins, Ottoman ruins, and Crusader-era ruins. He brings them all together in one painting in a way that seems to invite us to read this painting as being about the passage of time.” Meyers continues:

“The foreground is filled with architectural remnants. I think it would have looked to Church’s original viewers much like photographs they had seen of Fredericksburg, or Richmond, Virginia after the Civil War when the cities were lying in ruins. So, these paintings I think are about the horrors of history, the destructiveness of history, and yet, as always in Church’s major finished paintings, you have this glorious sunlight that shines over everything. This suggests that despite the pain and agony of human life which is real, and the fact that we all are born to die, nonetheless there’s a purpose to life and a purpose to history.”