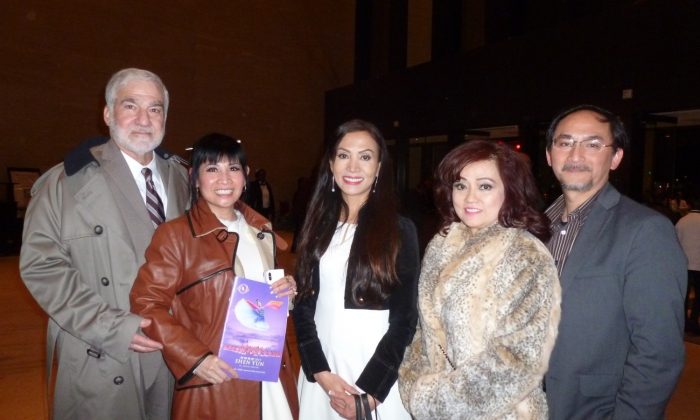 HOUSTON—Shen Yun Performing Arts concluded the Houston leg of their world tour on Jan. 16, and as Shen Yun left the Jones Hall for the Performing Arts stage for the thirteenth and final time until next year, uplifted theatergoers exited into the theater lobby.

Alan Cease is a lawyer, with his own practice, and Hanh Vo is a psychologist.

The couple enjoyed watching Shen Yun’s last Houston performance of the season on its world tour.

“The storylines are very powerful,” she said. “The performance is just out of this world. It’s amazing. I truly enjoyed it.”

Cease said, “I thought it was wonderful. I liked the music, and for sure I enjoyed the performers.”

“I liked the choreography a lot, and I also really enjoyed the special effects on that huge screen on the back,” said Cease.

Shen Yun has developed a digital backdrop that displays dynastic and celestial scenes. Performers seem to step in and out of those scenes as audiences are transported into the stories unfolding in the theater.

Shen Yun is headquartered in New York where it was formed in 2006 to revive the traditional Chinese culture. Chinese culture has a 5,000-year history and has formed through the expression of each dynasty’s cultural values such as benevolence and justice, wisdom and propriety, and respect for the divine.

“It seemed like a universal message,” said Cease. “That is, be kind, be good, and go up instead of down. I thought it was uplifting. It was very enjoyable.”

She used to work at the aerospace, space shuttle program but is now retired. He is a manager in the offshore energy industry, and has also been a Lieutenant in the U.S. Coast Guard. It was the duo’s first time seeing Shen Yun Performing Arts.

“The story was wonderful,” said Donna Royce, who said she felt peaceful, happy, and uplifted after watching Shen Yun. “It was very, very beautiful.”

“I loved learning about the different cultures and the different dresses,” she said. “And the songs that they sang were beautiful. I learned more about the cultural side of it. It was breathtaking.”

Shen Yun has dancers that show the dress of the cultures and dynasties and regions they are presenting, and use classical Chinese dance to portray the spirit and expression of the culture. There is also a live orchestra that combines Chinese and Western instruments, Shen Yun’s magical backdrop, and solo musical performances. Ms. Royce was moved by the singers.

“Those songs were touching, gorgeous,” she said. “And the costumes. I want to come back and see it next year.”

Mr. Royce added, “And the way they brought it all to today.”

“I would love to see the values back, because at the end, the conclusion, everyone’s walking around with their phones and they’re missing life,” she said, referring to one of the stories set in the modern day. But the ills of isolation had an antidote as well, which she gleaned as “your integrity, and your faith, and the peacefulness, the dignity.”

Ms. Royce said, “If we had that today, we’d have the perfect world.”

Though Shen Yun is reviving the traditional culture of China, Ms. Royce said the spirituality in the show was universal.

What Ms. Royce felt after watching Shen Yun is that humankind needs to turn back to its faith and tradition.

“To me, everybody’s lost our way,” she said. “And that’s what we need to go back to. That was to me the last meaning, to go back to our old ways.”

The couple found words together that they would use to describe Shen Yun: “Fantastic. Beautiful. Wonderful. Breathtaking. Uplifting. Spiritual.”

“I love it,” said Ms. Royce.  “You have to come to see it for yourself to experience it. Everybody takes something slightly different from it.”

With reporting by Sophia Zheng and Carrie Gilkison.