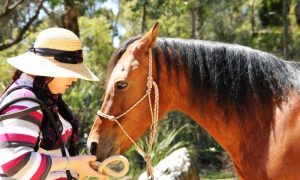 In the Company of Horses
0
Share Now
TelegramFacebookTweetEmailTellMeWeReddit
Copy Link 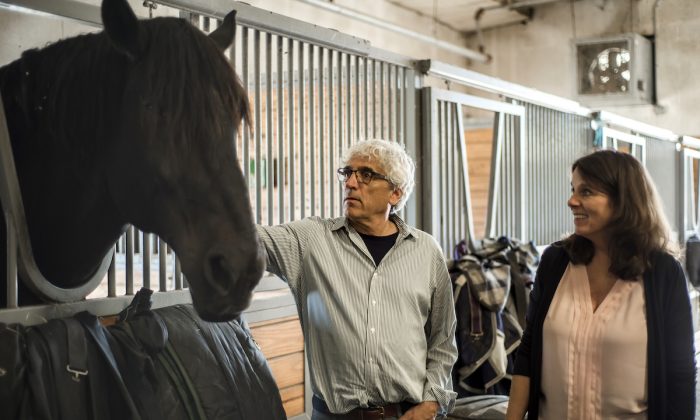 Dr. Yuval Neria (C) with one of the horses at Bergen Equestrian Center. (Courtesy of the Man O' War Project)
People

Building trust, sensitivity to overcome the traumatic experiences of war
By Andrew Thomas

For many of our military veterans, it’s difficult to go to war and return home as the same person. Our service members often experience traumatic, life-changing events during their deployments, and the scars from those experiences can manifest as post-traumatic stress disorder (PTSD).

Researchers at Columbia University are now experimenting with equine-assisted therapy as one form of treatment.

Working with horses can be therapeutic for several reasons: Horses are naturally hyper-vigilant, which helps the veterans they work with perceive and comprehend fear responses. They are also sensitive to verbal and non-verbal cues, are social animals, and are forgiving and non-judgmental.

Early research in the field has provided anecdotal evidence that equine-assisted therapy may be effective. Now, researchers are collecting empirical data to determine just how effective it may be.

Dr. Yuval Neria is one of the researchers in charge of the study. He teaches medical psychology at Columbia University and is the director of trauma and PTSD at the New York State Psychiatric Institute.

Neria himself is a veteran of the Israeli Defense Forces. He earned the Israeli Medal of Honor for his service as a company commander during the 1973 Yom Kippur War, during which he was wounded.

Neria also served in the 1982 Lebanon War as a battalion commander. He’s been studying psychology since 1984, and works at Columbia University on developing new ways to treat PTSD.

One of the studies he’s working on is called the Man O’ War Project, which is focused on researching the effectiveness of equine-assisted therapy for veterans suffering from PTSD. This will be the first clinical trial of its kind and the findings will be synthesized into a treatment protocol manual.

So far, 60 veterans have participated in the research, and the team has been collecting data since 2016. Initially, the veterans are assessed to determine if they have PTSD and if the treatment will be safe for them.

Once the veteran is accepted as a candidate, they undergo an MRI before and after treatment to examine the brain’s structure and functional connectivity.

The researchers study areas of the brain responsible for memory storage and retrieval, fear processing and response, distinguishing between safety and danger, learning, and how these areas are connected.

Veterans arrive at the Bergen Equestrian Center in New Jersey and are placed in groups of three to six people. Each group is paired with two horses, and the veterans engage in a variety of activities with them. The treatment lasts 90 minutes, once a week, for eight weeks.

First, the veterans begin by getting to know and grooming the horses. They then begin leading the horse, and then move on to more complicated exercises with obstacles.

Veterans have to earn the horses’ trust, and then can develop a relationship with the animal that’s based on respect and affection.

“The treatment is not so much about the trauma or about the symptoms. It’s really about intense and concentrated interaction with the horse,” Neria told The Epoch Times.

Tei Pascal is a 21-year veteran of the U.S. Air Force who completed the program. She lives in the Bronx.

Pascal has been deployed five times, but her deployment to Kirkuk, Iraq, left an indelible mark on her psyche. She and her unit experienced mortar attacks at least five days a week, and the barrages had a profound effect on her over time.

“It really takes a toll on you mentally, and this is where I discovered my PTSD started. I didn’t know it at the time—I didn’t even know about PTSD until years later—but Iraq was the catalyst for my PTSD,” Pascal said.

When Pascal returned home, she experienced a fair amount of stress, and struggled to figure out what she was feeling.

Pascal was living at Florida at the time, and one particular day, there was a severe thunderstorm. The thunder was so loud that it set off a car alarm, and she remembers taking cover with her son.

“This kind of shocked me, because it was the first time this happened, so I didn’t know what it was. It took me a moment to realize that ‘Hey, I’m not still in Iraq,'” Pascal said.

Pascal didn’t realize that she had PTSD, and didn’t seek help right away. But, over time, she noticed she had trouble remaining resilient about past traumas. She found herself hyper-vigilant, worried about loud sounds, and in a state of self-imposed isolation.

Initially, Pascal tried to cope by putting on a brave face and pretending that nothing was wrong. When she moved to New York, she wanted to start doing new things.

Pascal had always wanted to try horseback riding, and began taking lessons. After one of her lessons, she noticed a flyer for the equine-assisted therapy research that Columbia University was conducting.

Pascal knew she was struggling, plus the study involved something she loved: horses. So, in September 2018, she decided to participate.

“It focused instead on relearning skills necessary to build and maintain relationships. As a mother, this was really important to me because I needed to learn to trust people again. I needed to learn how to trust myself,” Pascal said.

Pascal and her group were paired with two horses, named Dutch and Jack. Initially, the group started by grounding themselves to keep themselves in the present.

Pascal would then do exercises with Dutch and Jack. She had to build trust with the horses, and learned that they picked up on her energy. She had to allow the horse to feel her energy and allow herself to feel the horses’ energy.

Pascal started by grooming the horses, and then, talking to them. After gaining the trust of the horses, she and the other participants began taking the animals on walks and doing more complex activities.

It took time and effort for her and the horses to be open and receptive toward each other, and Pascal learned she had to let her own guard down to earn their trust.

Over time, the emotional barrier Pascal put up between herself and the horses came down. She was then able to forge a relationship with them.

Neria and the team have yet to analyze the entire data set, but the results look to be promising. The team plans on releasing their findings later this summer.

They also plan to publish a treatment manual that’s informed by their research. Even though the analysis isn’t completed, the veterans seem to be responsive to the treatment.

“It was very profound for me and it was life-changing. It’s something that I found that really helped me with my PTSD,” Pascal said.