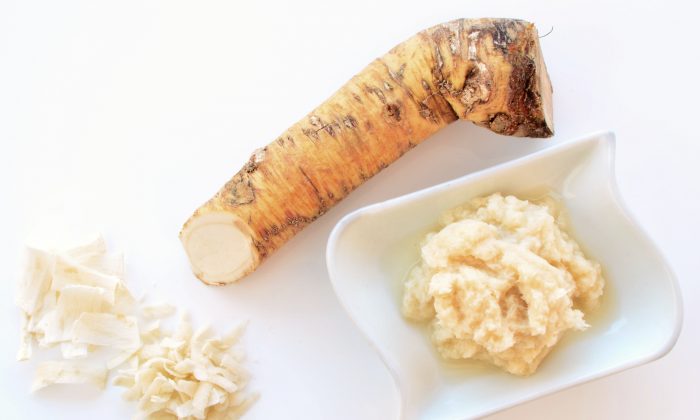 Horseradish is a digestive tonic, diuretic, as well as a strong laxative. (Elzbieta Sekowska/photos.com)
Fitness & Nutrition

A large percentage of the population these days suffers from symptoms resulting from underactivity of the stomach. Modern medicine calls it hypochlorhydria, and the older you get, the higher the likelihood of suffering from this condition. Symptoms may include stomach pain, discomfort, bloating, and burping soon after meals.

As a classically trained herbalist, in practice, I do not treat medically named diseases; rather, I treat people. The reason for this is that the causes of the same set of symptoms in a group of individuals may differ greatly from one individual to another.

Sadly, many people suffering from heartburn as a result of an underactive stomach are prescribed so-called acid-blocking drugs that include proton pump inhibitors (PPIs) and H2 blockers, which work by radically reducing the amount of HCL produced by the stomach.

This only exacerbates the condition and can lead to a host of further complications primarily resulting from the body’s lowered ability to absorb minerals and trace elements.

Over 50 million Americans suffer from frequent attacks of heartburn (at least twice a week). With PPIs being the first line of defense prescribed by doctors, they are the third-highest selling class of drugs in the United States.

A recent survey carried out by the American Gastroenterological Association found that out of 1,000 individuals taking PPIs for heartburn, more than 55 percent still experienced symptoms of heartburn that significantly disrupted their life.

What does all this have to do with horseradish? Horseradish provides a powerful stimulus to underactive stomach linings, enzymes, and other mucus-lined organs, including respiratory passageways, nose, and throat. It is a digestive tonic, diaphoretic (promotes fluid excretion through the sweat glands and skin), diuretic (promotes fluid excretion through the kidneys), as well as being a strong laxative.

For as long as people have been eating stodgy, overcooked meat and vegetables, they have been using horseradish root as a condiment to help digest such a meal.

Since the mid-1600s, the traditional British dish of boiled beef and cabbage has been accompanied by horseradish to stimulate gastric juices, pancreas, liver, gall bladder, and stomach linings to the point where overcooked meat can be more easily broken down.

I daresay in many other Western countries, the traditional BBQ where meats are routinely cooked beyond recognition would benefit greatly from the reintroduction of this old-fashioned condiment.

Long before horseradish was introduced into Britain, the Scandinavian cultures made horseradish root into a sauce for fish. The French call horseradish German mustard, and most accounts in the Middle Ages refer to its use by the Germans, who would slice it thinly and mix it with vinegar to accompany fish and meat.

It is also one of the five bitter herbs used in Hebrew ceremonies of the Passover, and it can be found steeped in vinegar in kosher delicatessens.

Horseradish was universally used by herbalists as a medicine before it passed into culinary use. The use of horse in the name of any herb is used to denote the strong properties and therefore lively effect it can have in the body. Horseradish is an herb or condiment that should indeed be introduced slowly.

If you suffer from symptoms of an underactive stomach, see an herbalist trained in iridology who can quickly and easily determine whether you are producing too much or too little stomach acid and which of the digestive organs are not functioning at their peak.

The gradual introduction of horseradish medicinally or as a table condiment with any savory meal will stimulate the digestive system and mucus-lined organs back to proper function.