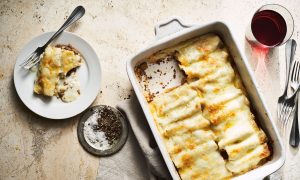 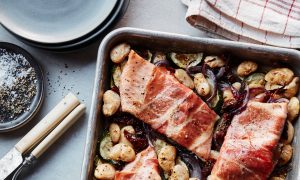 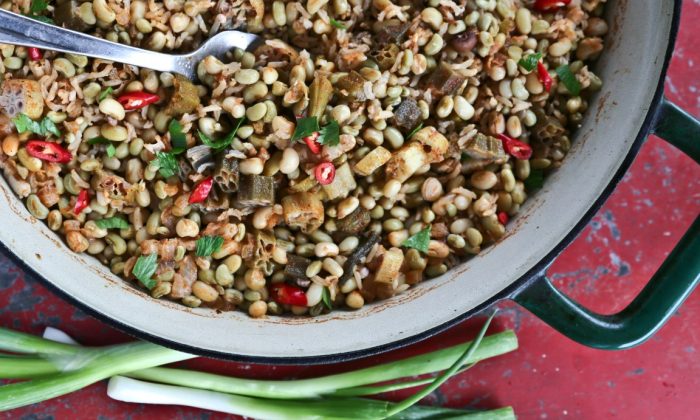 Hoppin’ John and Limpin’ Susan to Ring in the New Year, Southern-Style

Hoppin’ John is an old-fashioned country dish traditionally served on New Year’s Day. It’s made with peas, rice, and most often flavored with a hunk of pork such as salt pork, fatback, or hog jowl. So who is Limpin’ Susan? Legend has it that Limpin’ Susan was the wife of Hoppin’ John. There seems to be little known about the origin of the name for Limpin’ Susan, but the one constant is that it typically consists of rice, bacon, and okra. Both are one-pot, inexpensive meals. In this recipe, I have reunited the happy couple. It seems to me if one is hopping and the other is limping, they probably need each other to lean on!

Place a medium pan over medium-high heat. Add the bacon and cook until the fat is rendered, about 3 minutes. Transfer the bacon to a paper towel-lined plate and pour off all but a teaspoon or so of the bacon grease. Return the bacon to the pan. Add the onion and cook until soft and translucent, 3 to 5 minutes. Add peas, stock, the 2 cups water, and the dried chili. Season with salt and pepper. Bring to a boil over high heat, decrease the heat to simmer and cook, uncovered, until the peas are just tender (almost al dente) and about 2 cups of liquid remain, about 20 minutes. Taste and adjust the seasoning with salt and pepper.

Add the rice and okra to the pot, and stir to combine. Cover, and simmer over low heat for about 20 minutes. (If using brown rice, add the rice, but do not add the okra at this point. Let the brown rice simmer for 10 minutes, remove the lid and quickly add the okra. Cover and continue to cook until the rice and okra are tender, an additional 25 minutes.) Do not remove the lid during this part of cooking.

Remove the pot from the heat and allow the rice to steam, still covered, for another 10 minutes.

Remove the cover and remove the dried chili. Fluff with a fork; taste and adjust for seasoning with salt and pepper. Scatter the parsley over the top and serve immediately with the green onions, fresh red chili, and hot sauce.