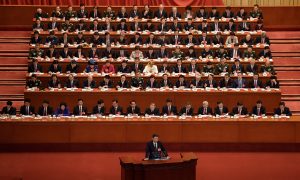 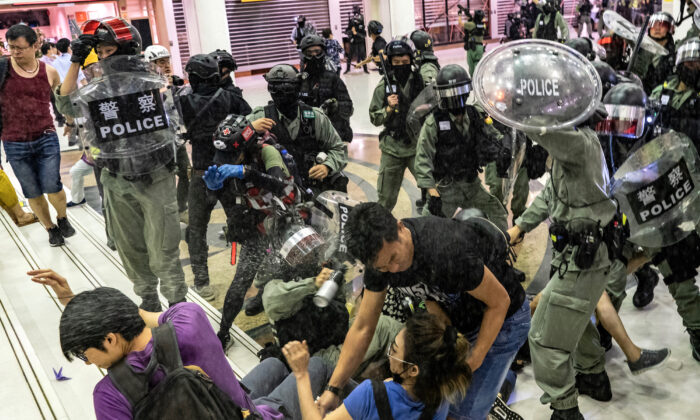 A riot police uses pepper spray as they attempt to make arrest in a shopping mall during a rally in Hong Kong, China, on Nov. 3, 2019. (Anthony Kwan/Getty Images)
HK Current Affairs

Locals in Hong Kong called for simultaneous protests in seven districts on Nov. 3 to condemn the police department’s use of force against protesters.

Meanwhile, police made arrests and cleared away crowds before some events could begin in earnest.

The Nov. 3 protests came a day after local police arrested more than 200 people for offenses such as unlawful assembly, property damage, and wearing a face mask during an illegal assembly. It was one of the highest number of arrests in a single day since mass protests began, according to local media. Among those arrested were political candidates running for the district council elections later this month, who were taken by the police during a peaceful assembly in Victoria Park.

They initially themed the event as seeking international support for Hong Kong’s crisis. When the police refused to approve their application, the candidates re-billed the gathering as a rally for local elections, which don’t require prior police approval.

On Nov. 3, local police searched people and made more arrests, as police officers moved to gathering points announced by protesters online, including Tamar Park in Admiralty, and a local town hall in Sha Tin.

At least five people were arrested at a park near the Sha Tin Town Hall, according to local media RTHK.

Police officers fired tear gas and made more arrests inside the New Town Plaza in Sha Tin, after protesters held a peaceful sit-in inside the shopping mall, according to local media.

Local police shut down Tamar Park, clearing out people who were inside the park before protesters could gather, according to RTHK.

Police officers also broke up protesters forming a human chain inside the Cityplaza Mall in Tai Koo Shing and made several arrests after a restaurant inside the mall was reportedly damaged by protesters, according to local media.

Hong Kong media Stand News reported that one of its photojournalists who was onsite conducting interviews was also taken by police inside Cityplaza Mall.

Blood was spilled in Cityplaza in the evening in an incident unrelated to the protests. According to RTHK, a Mandarin-speaking man slashed several people with a knife after he engaged in arguments with several mall patrons over “political differences.” The knife-wielding man then bit the ear of Democratic Party city councilor Andrew Chiu, who was trying to prevent the man from fleeing. Chiu represents the Tai Koo Shing area. An angry crowd at the scene then beat the man before the police arrived.

On Oct. 31, Hong Kong’s High Court, at the request of the Secretary of Justice, issued an interim injunction banning people from disseminating any information that “promotes, encourages, or incites the use or threat of violence” on popular Reddit-like forum LIHKG and the messaging app Telegram.

“This vague and overbroad language offends established principles of international law protecting the freedoms of opinion and expression,” the letter said.

“Such imprecise language leaves room for authorities to exercise wide discretion in law enforcement, with the potential to unlawfully chill speech and deter demonstrators.”

Pro-democracy lawmaker Charles Mok, who on Oct. 31 issued a press release criticizing the ban, took to his Twitter account to state his appreciation for the joint letter.

The joint letter warned that the ban will eventually lead to the Hong Kong government’s tighter grip on the internet.

All attention will be on Beijing on Nov. 6, when Lam is scheduled to meet with Chinese Vice Premier Han Zheng, according to a Hong Kong government press release.

Lam is to attend the China International Import Expo in Shanghai on Nov. 5, meet with Han the following morning, then attend the third plenary meeting of the Leading Group for the Development of the Guangdong-Hong Kong-Macao Greater Bay Area in the afternoon. The Leading Group was established by China’s State Council in 2018.

The meeting comes amid media speculation that Beijing might replace Lam before March next year. Lam herself and China’s Ministry of Foreign Affairs denied that there were such plans.

Han is the top Beijing official in charge of Hong Kong affairs, as head of the Leading Group and head of the Central Coordination Group for Hong Kong and Macau Affairs, an internal policy coordination group within the Beijing leadership.

This will be the first meeting between Han and Lam since mass protests began in June. According to Chinese state-run media, Lam had attended a second plenary meeting in Beijing back in March, which was chaired by Han.