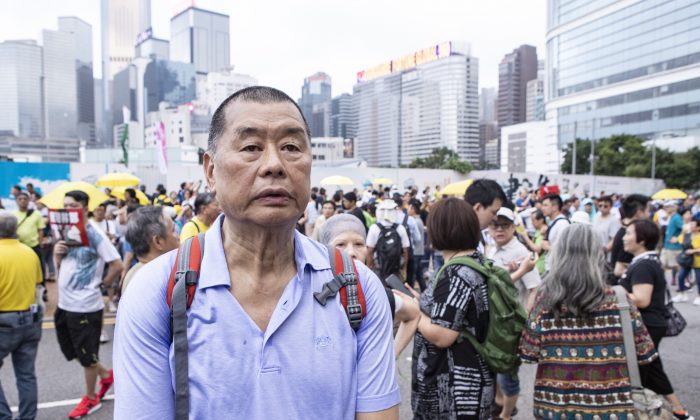 Top US Officials Meet With Hong Kong Media Tycoon Critical of Beijing, Much to China’s Ire

After Beijing lashed out at the U.S. administration for recently meeting with Hong Kong media tycoon and frequent Beijing critic Jimmy Lai, the latter fired back sarcastic comments, saying he was “honored” to be attacked by the regime.

On July 8, U.S. Vice President Mike Pence and Secretary of State Mike Pompeo met in Washington D.C. with Jimmy Lai Chee-ying, who founded Next Digital, the largest publicly-traded media company in Hong Kong. Lai’s flagship publication, Apple Daily, is one of the most widely read papers in Hong Kong and Taiwan, and is known for an editorial stance critical of Beijing.

Pompeo and Lai discussed Hong Kong’s autonomy under the “one country, two systems” framework and recent anti-extradition bill protests, according to a July 8 statement by the U.S. Department of State spokesperson Morgan Ortagus.

Radio Free Asia (RFA) cited Next Digital executive and Lai’s spokesman Mark Simon as saying that “The two had a constructive discussion about the situation in Hong Kong, human rights, and the broader context with China and Taiwan.”

Lai also “thanked Secretary Pompeo for the administration’s concern with human rights, and encouraged continued international attention to Hong Kong and the promises the Chinese government has made,” according to Simon. When the former British colony was handed back to Chinese rule in 1997, Beijing had promised to preserve its autonomy and freedoms under the “one country, two systems” model.

But Hongkongers have complained that in recent years, Beijing has increasingly encroached on the city’s affairs. To many, the controversial extradition bill that has sparked some of the largest protests in the city’s history encapsulated their worries about Beijing’s interference.

The bill, first proposed in February, would allow Beijing to seek extradition of criminal suspects from Hong Kong, with which the city previously had no extradition treaty, due to concerns about mainland China’s lack of rule of law.

In the past few weeks since mass protests erupted, Beijing has condemned international governments who voiced support for Hong Kong protesters, calling them “foreign forces” who are trying to interfere with China’s domestic affairs.

After news of Lai’s meeting with the U.S. officials emerged, the Chinese central government’s foreign ministry commissioner in Hong Kong issued an angry statement on July 9.

It specifically called out Lai as “a political tool for foreign powers to subvert China and stir up chaos in Hong Kong,” claiming that the United States was colluding with him. “Those who don’t care about Hong Kong’s interests…act like dogs pitifully wagging their tails at the door, ushering the wolf into the house,” using a Chinese idiom that means inviting an enemy into home territory.

It continued to lash out, calling such individuals, implying Lai, “national scum” and “ugly faces” that would be despised by all Chinese people.

“Don’t keep going farther and farther on this wrong path,” the spokesman warned the U.S. administration.

“To be accused by the Chinese [regime] is an honor of mine,” Lai said to Voice of America (VOA) reporters after speaking at a July 9 event in Washington D.C. hosted by the think tank Foundation for Defense of Democracies. The event was focused on the Hong Kong protests.

“They accused me of sabotaging Hong Kong’s rule of law, but I have done no such things. In fact, it was what they did that destroyed the rule of law in Hong Kong, and I don’t care what they say about me,” Lai retorted.

During the panel, Lai said he believed it was possible that Beijing could employ heavy force as protests in Hong Kong continue to escalate, recalling the time in 1989 when pro-democracy protesters convened at Tiananmen Square, mostly young students, were violently suppressed by the Chinese regime.

“The Chinese Communist Party [CCP] abides by one sole principle in its governance: to exert control followed by more control,” Lai said. “Once they [CCP authorities] realize that they had failed to control the people, they would use the extent of force they once did at the Tiananmen Square Massacre, and they would manage to justify it.”

Lai also reacted to Hong Kong Chief Executive Carrie Lam’s recent remarks that the extradition bill is effectively “dead.” Local rights groups had condemned her for failing yet again to withdraw the bill as protesters demanded. She had announced the bill would be indefinitely suspended on June 15.

He said that even if Lam agreed to withdraw the bill, Hongkongers would not obtain genuine democracy and freedoms until they are granted universal suffrage in electing their leader and members of the legislature.

“Even if we won this battle, the boss is still there,” Lai said. “Without universal suffrage, we will continue to face the same demonic rule [of the CCP].”

Currently, the chief executive is voted in by an electoral committee comprised of mostly pro-Beijing elites, while only a portion of lawmakers in the legislature are directly elected by constituents in a geographical area.

He added that the current battle between Hongkongers and China’s totalitarian regime is a war of values, with the city on the frontlines of defending freedoms that the United States also cherishes.

Lai plans to meet with more U.S. officials in Washington D.C., according to VOA.

He urged more U.S. officials to voice support for the current protests, which would “bring tremendous encouragement to the people of Hong Kong.”