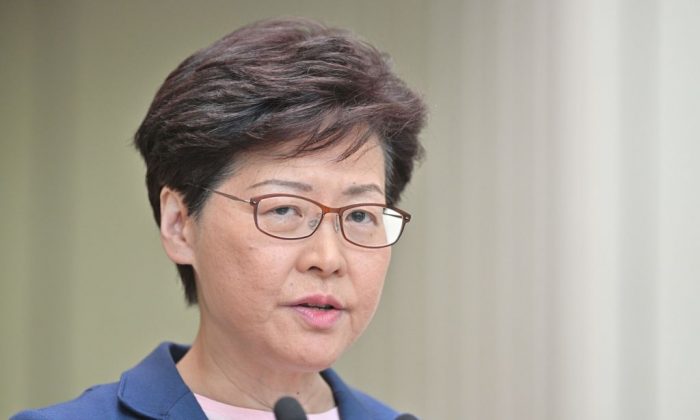 Hong Kong leader Carrie Lam continued to stir bad sentiment toward her government following a press conference on the morning of July 9, during which she said the government’s controversial extradition bill is “dead.”

In response to Lam’s comments, the Civil Human Rights Front (CHRF), which organized the three marches in the last month attended by millions of Hongkongers, said the group will continue to hold protests and assemblies as the Hong Kong leader continues to ignore the people’s demands, including the full withdrawal of the extradition bill from the pro-Beijing majority council.

Prior to Lam’s statement in English describing the status of the bill, she spoke in Cantonese, using slightly different words to describe the bill. She used a Chinese idiom meaning that something has come to a natural death.

When asked to elaborate on her meaning, Lam said she used such a description because she thought “people might want to hear a more ‘resolute’ remark”—reiterating that the government had no plans to re-table the bill, and that it would “automatically expire” when the current legislative session ends in 2020.

Lam didn’t respond directly to repeated questioning from reporters about why she would not say the bill is “withdrawn,” only implying that the phrase doesn’t have real teeth.

“Even if you say that the bill is ‘withdrawn’ today, in some sense, it could still be reintroduced at LegCo [the city’s legislature] after three months.”

Carrie Lam first said the #extraditionbill will be “suspended” >> “will lapse” >> “will die in a natural death” >> “will die” >> “is dead”
what’s the consideration of not saying the word “withdraw”?

The extradition bill would allow any country, including mainland China, to seek the extradition of suspects. The proposal has drawn widespread opposition, with many Hongkongers worried that if the bill were to pass, the Chinese Communist Party could pressure the city government to hand over citizens of any nationality to face trial in the regime’s opaque court system, which often disregards the rule of law.

“She still refuses to say the word ‘withdraw,’” CHRF told local media after Lam’s remarks. “The extradition bill being put in the Legislative Council is a very formal legal proceeding.

“However, she only said that the bill is ‘dead.’ We cannot find the word ‘dead’ in any of the laws in Hong Kong, or any legal proceedings in the Legislative Council.”

CHRF added that it will announce details of its upcoming protests soon.

For more than a month, CHRF has repeatedly called on the city government to meet its five demands, which include a complete withdrawal of the bill, Lam’s resignation, an independent investigation into the use of force by police to disperse protesters on June 12, a government retraction of its characterization of the June 12 protests as “riots,” and the release of those who have been arrested, as well as the withdrawal of charges against them.

On June 12, police used pepper spray, tear gas, rubber bullets, and bean bags in an attempt to remove protesters from the streets after some tried to break police lines outside of LegCo.

Lam said during the press conference that it wasn’t acceptable not to continue on with investigations and prosecutions of “offenders” from the recent protests. She reiterated that Hong Kong’s civilian body for investigating police misconduct, the Independent Police Complaints Council (IPCC), was investigating the incidents from June 9 to July 2.

The IPCC announced on July 2 that it would be compiling a detailed study of the extradition bills protests. June 9 was the date of the first CHRF march that drew 1.03 million people.

But CHRF said its demand for an independent inquiry into police action stands, adding that such an inquiry would have proper powers, including the power to summon witnesses.

According to the Hong Kong daily newspaper Apple Daily, there were at least 67 protester arrests between June 12 and July 8.

CHRF also stated that it is “totally impractical” that Lam now wants to have open dialogue with student representatives since many young protesters have already been arrested.

While pointing out how Lam had again failed to address protester demands, Wu said that she avoided a core issue: how to rebuild trust between her government and Hongkongers.

Hong Kong’s pro-democracy party Demosisto issued a statement following Lam’s press conference. According to Hong Kong media HK01, Demosisto said that Lam should just say the word “withdraw” to show the people that she is not playing with words and that there is no chance of the bill being revived.

Additionally, it called on the city government to hold two open elections so that people can directly elect members of the LegCo and the position of the chief executive—the position now held by Lam.

Joshua Wong, the iconic figure from the 2014 Umbrella Movement, is the secretary general of Demosisto.

Iris Tao contributed to this report.