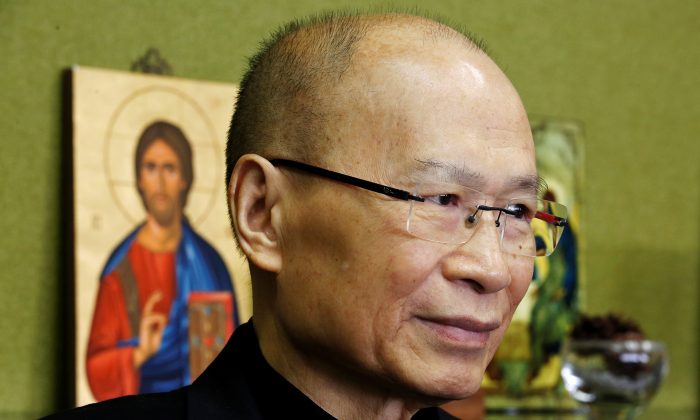 HONG KONG—Hong Kong’s leading Catholic cleric said on Oct. 3 that he feared continued suppression of Catholics in mainland China despite a landmark accord struck last month between the Vatican and Beijing’s Communist Party leadership.

Michael Yeung, the Bishop of Hong Kong, said it would take time to address issues beyond the appointment of bishops agreed in the accord. These included the release of detained clerics and full free expression of religious belief in China.

The details of the provisional agreement, which gives the Vatican its long-desired approval of the appointment of bishops in China, have not been made public by either side.

Yeung, whose Hong Kong diocese has for decades served as a free Catholic beachhead on the edge of an officially atheist China, said he had not seen the details.

“I don’t think the signing of this provisional agreement means the solution of everything. It takes time, it will take a few years to see,” he told Reuters in a rare interview.

China’s Foreign Ministry did not respond immediately to a faxed request for comment. The country is mostly closed for the Golden Week holiday.

Yeung urged China to provide information about priests and bishops detained on the mainland, some of whom are elderly and held for decades.

A Reuters report on Sept. 30 cited three sources familiar with the matter who said the plight of the detained clergy remains unresolved and Beijing has provided little clear information about their fate.

Yeung said many Hong Kong Catholics had been praying for one of the longest held, Bishop James Su Zhimin, who was arrested in 1997 in Hebei province and would now be 86 years old.

“Whether he is in prison, or kept secret in some other place, or whether he has already died, nobody really knows,” he said.

Su was part of the underground church, which has been loyal to the Pope for decades–a movement that some critics of the accord fear will be crushed by the state-backed official church that has at times previously chosen its own bishops.

The deal allows for the Pope to approve bishops first selected by church communities and the Chinese authorities, meaning China’s 12 million Catholics split between the two camps must now effectively integrate.

Hong Kong is one of the most important Catholic cities in Asia, home to an extensive network of aid agencies, missions, scholars and media that have supported Catholics in China and elsewhere.