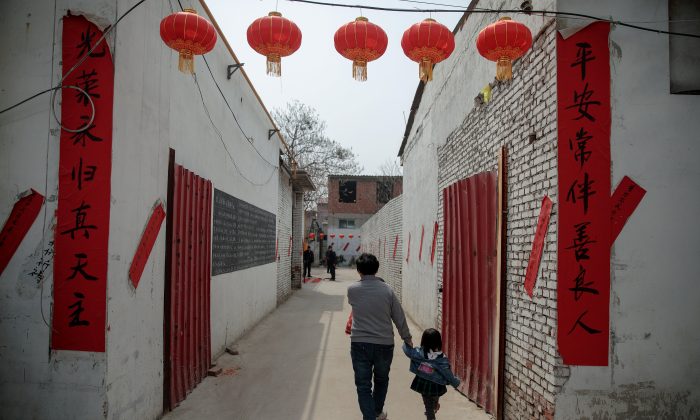 Banners with religious slogans are placed outside an "underground" Catholic church run by outspoken priest Dong Guanhua, as it is decorated for the Easter celebration in Youtong village, Hebei Province, China on March 31, 2018. (Damir Sagolj/Reuters)
China Human Rights

HONG KONG/VATICAN CITY—A landmark deal between China’s leaders and the Vatican over the appointment of bishops has been struck without Beijing taking action on long-held Church concerns over clerics in detention, Catholic Church sources familiar with the matter say.

The agreement, which gives the Vatican a long-desired say in the appointment of bishops in China, was signed on Sept. 22, but details have not been made public.

Three sources aware of the substance of the provisional deal say the plight of a dozen or so detained priests and bishops, some elderly, remains unresolved and will be subject to on-going Vatican efforts. Beijing has provided little clear information about their fate despite repeated Vatican requests in recent years, the sources said.

A senior Vatican source said the precise number still believed to be in detention was not clear.

Some of those held are feared to have died in detention, according to Catholic priests and activists who monitor the situation on the mainland.

Neither China’s Foreign Ministry, which has been leading the talks with the Vatican, nor the Ministry of Public Security immediately responded to requests for comment.

A Vatican spokesman said he had no immediate comment.

The Justice and Peace Commission of the Hong Kong Catholic Diocese issued a statement in June protesting the renewed detention of Bishop Cui Tai from Hebei Province in April, urging the release of all “unreasonably and illegally detained clergy”.

They also highlighted the detention of Baoding Bishop James Su Zhimin. Now 86, Su has been held since his arrest in October, 1997 but no details of his whereabouts or condition are known.

“The reality is this deal is a small step, a very small step…there is much hard work ahead on unresolved issues,” said one cleric familiar with the pact.

Hong Kong priests say a total figure of clerics under detention or house arrest in China is hard to pin down given official opacity. Beyond long-term detentions, some are held briefly by local authorities.

China’s approximately 12 million Catholics have been split between an underground church loyal to the pope and the state-supervised Catholic Patriotic Association.

Another issue still to be finalized, according to the same three Catholic sources, is the future roles and responsibilities of some of the seven bishops ordained by Beijing’s state-backed church without Vatican approval, but legitimized by Pope Francis to clear the way for the deal.

Two of the seven had faced earlier Vatican investigations into allegations they had wives or girlfriends, according to Catholic sources–contravening the vow of celibacy taken by Catholic priests.

They are expected to take up administrative or symbolic roles, keeping the title of bishop without carrying out full responsibilities, including the ordination of priests, the sources said. Reuters has not been able to independently confirm the personal status of these two bishops.

Under the deal, the government will no longer appoint bishops without the approval of the Vatican, which will be given candidates chosen by Catholic communities and Chinese authorities.

But uncertainty is already mounting among some Chinese faithful over how their underground body will integrate with the government-linked Church.

Father Bernardo Cervellera, editor of Rome-based Catholic news agency AsiaNews, said that underground bishops were still restricted. They can say Mass but not move around their dioceses as freely as they wanted.

Missionary priests in contact with underground counterparts in recent days say the pressure on them has intensified in recent months.

“I think of the endurance of the Catholics who suffered. It is true that they will suffer. There is always suffering in an accord, but they have great faith,” Pope Francis said on Sept. 24. He has repeatedly defended the deal.

The Bishop of Hong Kong–for decades a vital Catholic beachhead on the edge of officially atheist China–on Sept. 29 expressed his reservations over the pact, saying time and more details were needed before it could be fully judged, or even called an agreement.

Quoted in this weekend’s edition of the Sunday Examiner, the city’s Catholic newspaper, Bishop Michael Yeung referenced lyrics from the 1970s Swedish pop group ABBA: “The winner takes it all, the loser’s standing small.”

“Catholics in China are neither radicals nor revolutionaries, instead they are really poor people,” he was quoted as saying. “It is unfortunate that the Communist government targets the Catholic Church….”

Bishop Yeung, who told the paper he was not yet aware of the content of the accord, did not respond to Reuters’ questions.

A Hong Kong-based Vatican envoy was also quoted in the Examiner saying that the deal was of “great importance,” but more negotiations were needed to ensure more freedom and autonomy for the Church.

Hong Kong is one of the most important Catholic cities in Asia, home to an extensive network of aid agencies, missions, scholars and media that have supported Catholics in China and elsewhere.

While the Vatican instituted similar accords with Communist authorities in Eastern Europe and the former Soviet Union during the Cold War, the situation in China differs because Beijing created a rival brand of Catholicism through the Patriotic Association.