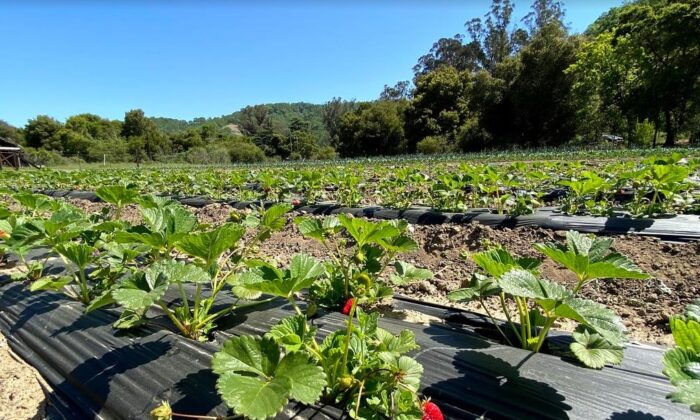 A field of strawberries at Berry Island Farms in Gilroy, Calif., on April 16, 2021. (Ilene Eng/The Epoch Times)
US Features

Homesteading Is Gaining Popularity: A Practice That Is Deeply Rooted in the Missouri Ozarks

After last year’s lockdowns and food shortages, a trend to be more self-sufficient has grown. Throughout the country, more and more people are moving away from cities to start homesteading.

The term homesteading in itself can be confusing. In 1862, The Homestead Act was created to distribute public lands for private use. The definition also refers to ancestral homes or houses occupied by a family with adjoining land. But most recently, homesteading has come to describe the practice of “living off the land.”

The owner of Sharingwood Farmstead described her experiences to The Epoch Times, “We moved out to a renovated home on 7 acres in 2018 to help us, as a family, cope with symptoms of anxiety and ADHD in myself and our kids. From the beginning, it was a literal and figurative breath of fresh air! It’s hard to explain, but there was an immediate sense of calm‒even though there was, and always is, a long list of things that needed doing. We started with fixing up the house and trying to control pests that had overtaken the property. It was natural to get a cat to help with mice, and a dog to help us keep coyotes away, and then chickens to help with ticks. When we realized that we could manage these three species, and that we enjoyed them, we started thinking of our new life from a big picture point of view. What else could we do? So we decided to try pigs, rabbits, and other fowl. We added a cow last spring during COVID and rounded out our ‘farmstead’ with sheep and goats this spring.”

The homesteading boom has led to YouTube channels about raising and tending livestock, growing and harvesting food, and preserving supplies. Some homesteaders are new to this practice, but in the Missouri Ozarks, it is a large part of the culture and heritage.

The Epoch Times also interviewed Cheryl Franklin of Beeman Hollow Farm. She has been homesteading since the 70s and is the creator of the Ozarks Homesteading Expo in Goodman, Missouri.

When asked about homesteading, she had plenty to say, “A lot of people ask: what’s homesteading? It’s kind of a trendy word right now. But it goes back to the concept of being self-sufficient, which is like an old word, and it really goes back to being self-reliant and even the barter system, canning, and preserving. And here in the Ozarks people have been living that way for generations. But back in the 70s I was living in New York, and moving from there to here, it was a big culture shock.”

She went on, “I kind of embraced it. And I thought it was the coolest thing, to go to the neighbors for milk and eggs. Moving to the country, I thought there was all this free food. There were blackberries on the side of the road and cherry trees, and elderberries‒before most people really knew much about them. Even with gardens, I thought of it all as free food. And here in the Ozarks, people have been living this way, homesteading and so on, for generations. Even foraging plants and edible plants, and that’s sort of going away. These people are dying off. Those generations are ending.”

She explained how the pandemic has led younger people to revive homesteading, “During the pandemic, there were food shortages and people, they were pondering where their food came from, some for the first time. As people were hibernating or isolating, people were watching canning videos, and learning how to raise a cow, or milk a cow, and learning how to really take care of themselves.”

Mrs. Franklin talked about how this new interest in homesteading reminded her of her start. “I’ve always been kind of an information junkie, and so when I came here I wanted to learn how to do it right. Some people just did things because that’s how they did it, but I wanted to dig in and avoid pesticides and really work with better practices. We’ve been doing this, providing for ourselves on that scale for many years. Our kids were raised milking goats before they went to school, and my kids never ate store-bought bread until they were much older. And I worked, so I’d be milking a goat at 5 a.m., and by 8 a.m. I’d be dressed for success.”

Her love of homesteading and working hard was also driven by a love of teaching. “I love to teach people. I was a 4-H leader because I love to help the kids learn. You know, I’m gonna be a teacher when I grow up,” she joked. “But I love to share how to do things. I love to teach people and because of that I started, that’s why I kind of, got the idea to have an event and get a group of people to come together. That’s where I got the idea for the expo. People just know to call me if they need something, and I know people who know things. I’ve learned a lot and I know who to go to and that’s what I wanted to do. Bring them all together.”

The expo was born from her connections and is something she is very proud of and eager to share. “We have bread-making, canning, and cheesemaking. And you can do that anywhere. It doesn’t matter if you live in the city or not.”

She had some advice to offer people who are looking to start homesteading, or those who wish to just make some lifestyle changes to be more self-sufficient. “You need to know that it’s a lot of work. But start small. Prepare for failure and then you won’t be disappointed. You can do this for 20 years and still have more to learn. That’s why I do the expo. I really love it!”