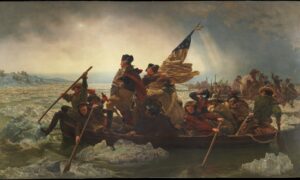 Against All Odds: The Courage of Washington Crossing the Delaware
0
Share Now
TelegramFacebookTweetEmailTellMeWeReddit
Copy Link 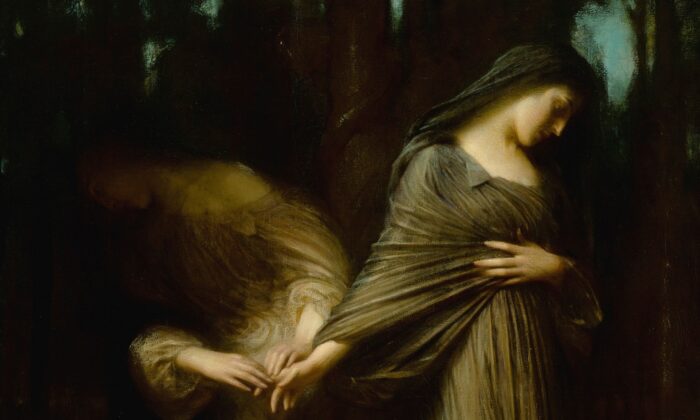 Holding On to Eternal Virtues: ‘Farewell’

Change is a fact of life. Sometimes we hurt ourselves by trying to keep things the same forever. We hurt ourselves when we cannot let go of and accept the inevitability of change. It doesn’t mean that there aren’t some things that don’t change; some things are eternal.

In 1913, the English painter Arthur Hacker created “Farewell.” Sotheby’s website suggests that it was painted as if it was “almost in anticipation of the First World War, with the irrevocable changes that it caused.”

“Farewell” is a simple painting, but its mystery and the mood it invokes causes me to ask certain questions, which may be relevant for us today.

Hacker painted two female figures in a dark setting. The woman on the left is almost completely obscured by background shadows, whereas the woman on the right is more fully illuminated.

The woman on the left wears a light-colored dress, and the woman on the right wears a darker one. The two women hold each other’s hands but appear to be at the very moment when they let go of each other. They are not facing each other but are turned away from one another, and their heads are bowed in sadness.

On the ground by their feet is a passionflower. The passionflower is not traditionally symbolic of emotional passion but of the passion of Christ, that is, for his compassion and self-sacrifice for the betterment of human beings.

Behind the two women, blue-green light shines through between the trees in a few places. The tree in the center, however, has a snake coiled around it. In the shadows, this snake is only perceptible upon close examination.

Letting Go of the Wrong Things

What wisdom might we gather from this simple image? Why are the two women dressed differently? Why does the passionflower rest at their feet? And why is a snake coiled around the tree in the background?

The time period in which this painting was completed can provide some context. The beginning of the 20th century witnessed an ideological shift in Western civilization. With the advent of Marxism and Darwinism, the West experienced a change from the long-held virtues of compassion and self-sacrifice to materialism and natural selection.

To me, this shift from virtue to materialism is what Hacker’s painting depicts. The woman to the left wears a light-colored dress. Her dress may even be white and may only appear off-white because of the shadows. White is often the color traditionally symbolic of virtue and purity.

It also appears that the woman in white is putting in more effort than the woman in dark garb: Though she turns away, the woman in white has both of her hands on her counterpart’s single hand, which hangs palm-down in the center of the composition, as if she were the one who has dropped the passionflower. The woman in white, because of her virtue, does not want to let go of the other woman until there is no hope.

Having dropped the passionflower, the woman in the dark gown is also saying farewell to traditional virtue. She no longer holds the flower, and instead, she seems to grasp her own clothing. Pulling the fabric around her arm creates a tension between her and the woman in white, for her arm appears as if it will fling forward as soon as the woman in white lets go of her hand. This tension reasserts the contrast between absolute materialism and virtue.

To me, since the tension on her dress is caused by the woman on the right herself, this tension also suggests that people who adopt ideologies of absolute materialism and natural selection end up causing themselves stress.

In the Christian tradition, the snake is symbolic of temptation. The snake is sneaky and obscures itself in the shadows, but its presence suggests that it is in some way manipulating the situation.

I believe the snake to be symbolic of material temptation, to which the woman in dark dress has succumbed. The woman in white represents traditional virtues such as compassion and self-sacrifice and has tried her best to plead with the other woman to take these virtues seriously. The woman in the dark dress, however, has been tempted by the snake in the background, and so, instead, she says farewell to the woman in white—to virtue—and opts instead for material possessions.

The woman in white, recognizing that her cause is lost, retreats into the shadows, and the woman in the dark gown—despite having in her hand what she desires—is still unhappy.

Indeed, change is a fact of life, and we can cause ourselves a lot of pain by trying to prevent it. Sometimes we need to say farewell to things in our lives.

Today, we might ask ourselves: Do we have the courage to search the shadows for the woman in white and again find the traditional virtues of compassion and self-sacrifice?