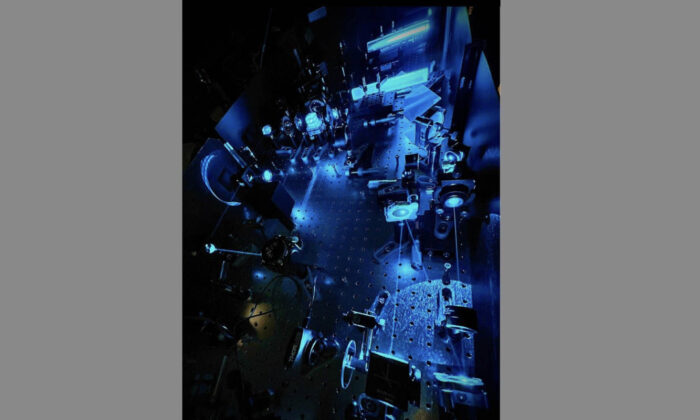 A research team from the University of Hong Kong (HKU) and the University of California, Berkeley, developed an ultrafast microscopic imaging technique. The picture shows the structure of the free-space angular chirp enhanced delay (FACED) all-optical scanner. (HKU)
Health

A research team from the Department of Electrical and Electronic Engineering of Hong Kong University (HKU) and the University of California, Berkeley developed an ultrafast microscopic imaging technique that is at least 100 times faster than the usual advanced technique. For the first time, the researchers have captured clear images of red blood cells (RBC) circulating in the brain of an awake mouse, facilitating knowledge of cerebral hemodynamics. The study was published in the Proceedings of The National Academy of Sciences (PNAS) in June.

The cross-faculty research team is led by Professor Ji Na, Department of Molecular and Cell Biology of University of California, Berkeley, and Professor Tsia, Kevin Kin-man, Department of Electrical and Electronic Engineering of HKU and Project-in-charge of Biomedical Engineering. The team is comprised of engineers and neuro-biologists.

The team said that one-photon fluorescent imaging is used under the current microscopic technique, which means a whole image forms at low speed due to single focal scanning each time. It can scan the cerebral activity in anesthetized animals as the blood flow has been lowered.

The team developed a two-photon fluorescent imaging technique with light able to pass through the cerebral capillaries so that the image of the fast-moving RBC can be clearly observed and captured even when the mouse is awake. Since RBCs provide energy to cerebral neurons, their movement offers clues to cerebral activities. The technique also opens our understanding of the alternation of blood flow in one particular vessel or even a large network of capillaries crossing over different organs, leading to the knowledge of health-related issues. For example, comparing the energy-adjusted blood flow inside the brain of a patient with Alzheimer’s disease or stroke with that of a normal person, would provide insights for the treatment of cerebral diseases.

Professor Tsia, Kevin Kin-man said, “We possess such an ultrafast technique to capture the image of high-speed particles, which is faster than the latest existing technique by at least 100 times. Even an image of a single cell can be captured. The number of cells can be calculated and their moving tracks can be traced.