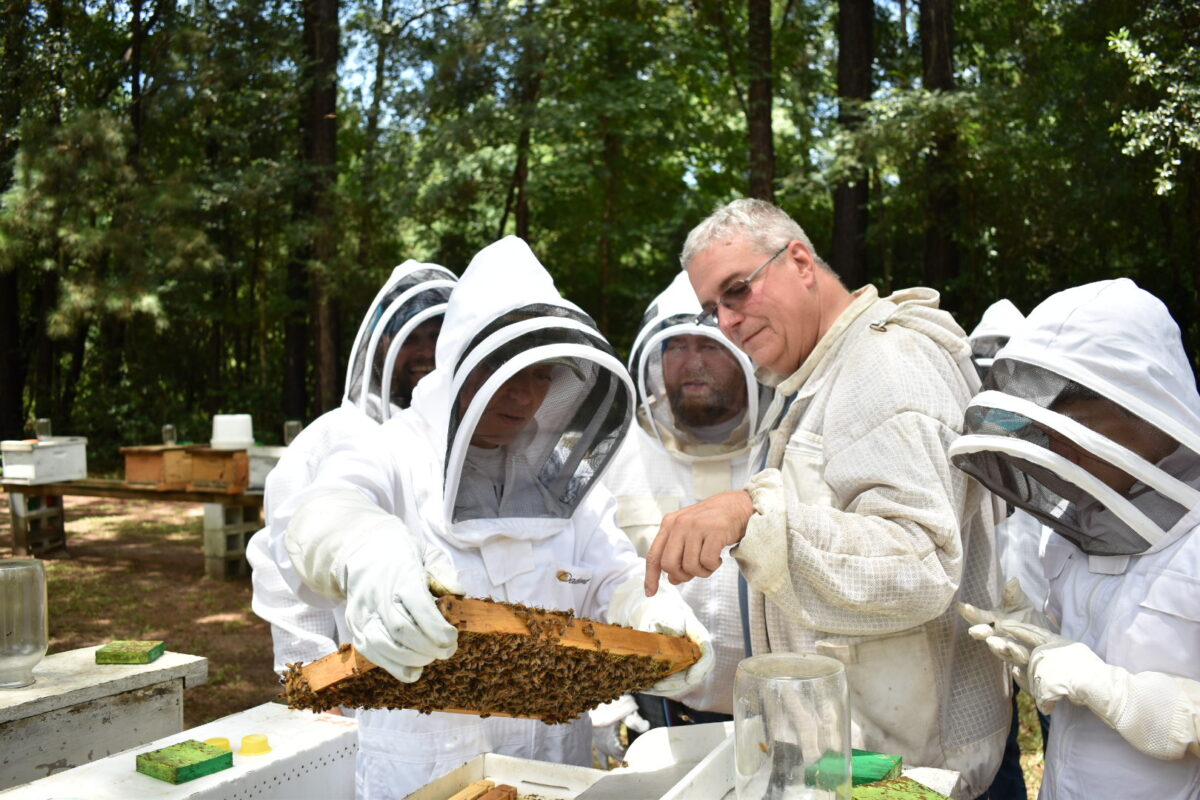 Hives for Heroes aims to make a difference in veterans' lives through beekeeping, purpose, and social connections. (Courtesy of Hives for Heroes)
People

Hives for Heroes Provides Connection and Purpose for Vets Through Beekeeping

“Save Bees—Save Vets” is the motto of the charity Hives for Heroes, and they do exactly that.

While bees and veterans may sound like an unlikely pairing, founder and CEO Steve Jimenez discovered they’re a perfect match for helping both two-legged and six-legged creatures.

A major problem among veterans is the suicide rate. Jimenez noted there are more vets who have died by suicide than were killed in action in Iraq and Afghanistan combined.

“When you look at numbers, like 20 to 22 a day for the suicides, we consider that an epidemic,” he told The Epoch Times.

Jimenez described two aspects of military service: One is family—not in the genetic sense but in the emotional sense—and the other is mission.

“There’s a culture of caring for your brother and sister to your left and right. And you have a clear and defined mission: defend the United States and/or anything that your commanding officer has shared. So this is the mission of our unit; this is what we do,” he said.

But often upon discharge, veterans lose their sense of family and no longer feel they have a mission. This is sometimes combined with mental or physical health issues.

And this is where Hives for Heroes comes in. The charity provides veterans with a family atmosphere and sense of purpose through beekeeping.

Bees and the Military Have a Lot in Common

One may find it difficult to connect the dots from bees to vets, so Jimenez laid out the “social order of bees.”

Jimenez described how young bees with a specific job will get “promoted” to another job and then another before the end of their 40-day life cycles.

In keeping with the bee-and-military hierarchy theme, Hives for Heroes calls its first-year beekeepers “newBEES,” the second-year “worker bees,” and the third-year “mentors.”

Jimenez knows that veterans often gravitate toward bars, where they’ll spend a lot of money drinking and commiserating with each other, sometimes leading to DWI arrests. He believes no one benefits from this scenario, especially the families of the vets.

Through Hives for Heroes, “veterans start getting outside of the bar and into the bee yard,” Jimenez said.

The charity is headquartered in Houston, but there are newBEES and mentors paired up throughout the country. When Jimenez started it three years ago, he had about 20 pairs. In year two it grew to about 350, and this year he has about 1,125.

Much of the work is done one-on-one (a mentor with a newBEE), but the organization also holds large events through corporate sponsors. These include education (usually via video) on topics such as honey bottling and and hive building.

One sponsor, TechnipFMC, a Houston-based energy company, partnered with Hives for Heroes on two recent events: the harvesting and bottling of honey that was given out to employees, and leadership development training.

“TechnipFMC is about a $20 billion company and we had their entire C-level [corporate executives] for almost two hours,” Jimenez said of the latter event.

Hives for Heroes also participates in events organized by others, such as National Honey Bee Day (the third Saturday in August) and World Bee Day (May 20).

It’s at events such as these, as well as non-corporate events the charity organizes, where the family aspect sparkles.

According to the YouTube video “The Death of Honey Bees Explained,” a phenomenon called “colony collapse disorder” has led to the rapid decline of honey bees throughout the world. Hives for Heroes is doing its part to fix that.

“Our goals are to conserve and grow the honey bee as a pollinator,” Jimenez said. “One of about every three spoonfuls of food that you put in your mouth is pollinated by a bee.

“It’s really cool that the veteran, at a hyper-local level, is contributing to the overall ecology and the overall environment.”

Jimenez served in the Marines, where he reached the rank of captain. In 2018, seven years after he returned to civilian life, he found himself with a shotgun in his mouth, on the verge of becoming one of that day’s 22 veteran suicides.

Someone close to him called the police, and the officer who responded had also once served as a Marine and was able to save Jimenez from himself.

Soon after, a friend from a military nonprofit Jimenez was part of invited him to a beekeeping event, prefacing it by saying the bee is her spirit animal.

Jimenez was hesitant at first but went, not knowing what to expect. He suited up in beekeeping gear and opened the lid, which released the bees. He found himself “being in the moment.”

“All this chaos actually becomes calm and is very familiar to veterans, especially combat veterans,” he said.

This experience, combined with the growing need to help vets who find themselves at rock bottom as he once was, led to the start of Hives for Heroes.

An Active Role in Prevention

Jimenez knows that he and his volunteers aren’t the calvary that’s going to show up at the last minute and stop a vet from committing suicide.

“We’re actively preventing suicide,” he said. “We want to get out in front of suicide, so that thought doesn’t come.”

“This isn’t a beekeeping organization; it’s a people organization,” he said. “It just so happens bees are awesome.”

Ron Ray of Trafalgar, Indiana, is a 10-year Army combat veteran from the wars in Iraq and Afghanistan.

After his return to civilian life, the former staff sergeant found himself battling alcoholism and addicted to the painkillers prescribed by Veterans Affairs for combat injuries.

Soon the prescriptions weren’t enough, and he sought out other suppliers for pills. One questionable pill led to an overdose.

Ray, who connected with Jimenez a few years ago, gives much of the credit for his current sobriety to Hives for Heroes.

Ray discovered an unexpected bonus from beekeeping: The swelling from bee stings, or possibly the venom, actually relieves pressure caused by his combat injuries.

His experience with Hives for Heroes inspired him to start his own company, ARK Apiary, where he removes hives from the walls of people’s homes and businesses. For his first job, he removed 47 hives from one apartment complex.

It isn’t just removal he does, but also relocation of the hives to either a hospital yard or his own apiary.

ARK Apiary also makes and sells lip balms, candles, jarred honey, and other products made from the honey his bees produce.

Ray has mentored two newBEES and was recently assigned his third. “So far it’s been working great,” he said. “Long-lasting relationships far beyond just beekeeping.”

Ray and his first newBEE from more than a year ago talk on a daily basis, and Ray still talks to his own mentor. “It’s just becoming a bigger and bigger family every day,” he said.

With all the success Hives for Heroes has had in its three years, one might say, “It’s the bee’s knees.”