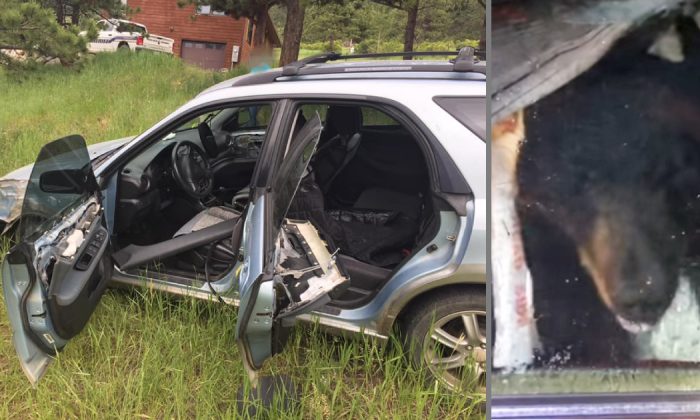 A wild bear is suspected of crashing an unlocked car at Aspen Park, Co., on July 4, 2019. (Boulder County Sheriff's Office and Colorado Parks and Wildlife)
Animals

A wild bear is on the run in Colorado after driving a car into a tree and leaving the vehicle in an unroadworthy condition on July 4.

“The bear worked on digging out through all four doors but apparently butt-shifted the car into neutral,” the sheriff’s office said on Facebook. “The car rolled back and off the driveway and about 100 feet down the hill.”

During the bear’s “delinquent” joyride the car swiped a tree, causing the vehicle to become undrivable.

“In the process [it] popped a door open, and [the suspect] fled on foot … er, on paws in an unknown direction,” the sheriff’s office said. “Here’s a good reminder to keep your car doors locked, especially in bear country.”

The sheriff’s office was unable to identify or find the suspect.

“The suspect bearly got away,” Colorado Parks and Wildlife (CPW) said on Twitter.

The suspect bearly got away.

A reminder to lock your cars in bear country! https://t.co/Ii0ihSLFGQ

CPW released video footage of damage another bear caused to a different car and asked people to lock their cars while staying in “bear country.”

“There are a lot of great places for wildlife sightings but inside your car isn’t one of them,” CPW said on Facebook. “Bears can follow scents from up to 5 miles away and something as simple as hand sanitizer can lure one in.”

CPW said there are some simple steps to avoid unwanted attention from bears, including locking the car, removing anything that could attract bears, and playing a talk radio show that does not broadcast music.

“Keep car doors and windows closed and locked if you park outside,” CPW said on its website (pdf). “Make sure there’s nothing with an odor in your vehicle, including candy, gum, air fresheners, trash, lotions, and lip balms … the human voice startles most bears.”