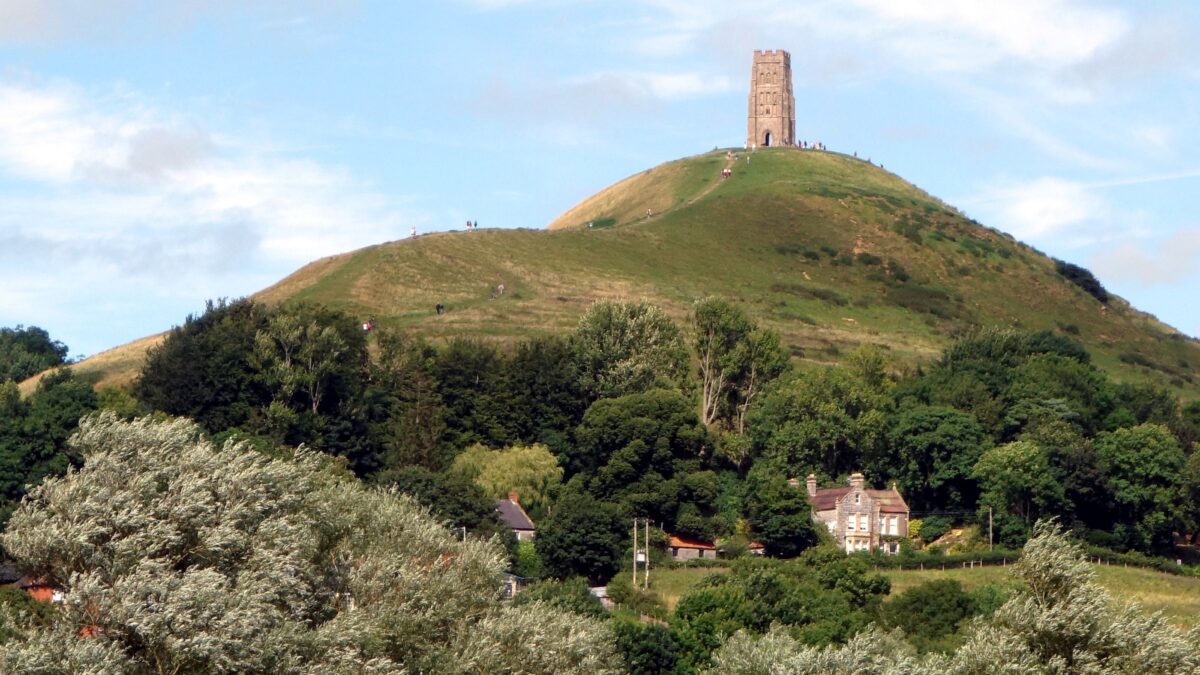 History and Mystery in Glastonbury

Two hours west of London, Glastonbury is a mecca for seekers. It gurgles with a thought-provoking mix of history and mystery. For the views, hike up the 500-foot-tall Glastonbury Tor (a grassy, conical clay hill capped with an old church tower), and you’ll notice the remains of the labyrinth that made climbing the hill a challenge some 5,000 years ago.

In AD 37, Joseph of Arimathea, Jesus’ wealthy tin-merchant uncle, supposedly brought a vessel containing the blood of Christ to Glastonbury, and with it, Christianity to England. (Joseph’s visit is plausible because back then, merchants from the Levant came here to trade with the local miners.)

While that story is supported by fourth-century writings and accepted by the Church, the King Arthur and Holy Grail legends it inspired are not. Those medieval tales were cooked up when England needed a morale-boosting folk hero to inspire its people during a war with France. They pointed to the ancient Celtic sanctuary at Glastonbury as proof of the greatness of the fifth-century warlord, Arthur. In 1911, his supposed remains, along with those of Queen Guinevere, were dug up here, and Glastonbury was woven into the Arthurian legends. The Camelot couple was reburied in the abbey choir and their gravesite is a kind of shrine today. Many believe the Grail trail ends at the bottom of the Chalice Well, a natural spring at the base of the tor.

England’s first Christian sanctuary was built right next to the Chalice Well. Eventually, a great abbey rose on the site. Mix the scant ruins of England’s oldest church with the mystique of King Arthur and Holy Grail, add the hard work of a busy monastery, and, by the 12th century, Glastonbury was the leading Christian pilgrimage site in all of Britain.

At its peak, Glastonbury Abbey was England’s most powerful and wealthy, part of a network of monasteries that by the year 1500 owned a quarter of all English land, and had four times the income of the king.

In the 16th century, Henry VIII, on a rampage against the power of the monasteries, destroyed Glastonbury Abbey. For emphasis, he hung and quartered the abbot, sending his body on four national tours — at the same time. Two centuries later, Glastonbury rebounded. In an 18th-century tourism campaign, thousands signed affidavits stating that water from the Chalice Well healed them, putting Glastonbury on the tourist map.

Today, Glastonbury is a center for searchers. It’s too out-there for the mainstream church, but just right for those looking for a place to recharge their crystals. Since the society that built that labyrinth worshiped a mother goddess, the hill, or tor, is seen by many today as a symbol of the Sacred Feminine.

For those fascinated with mysterious Britain, within a short drive of Glastonbury there are a world of sights. You can see countless forgotten tombs, man-made hills, and figures carved into hillsides whose stories will never be fully understood.

Perhaps the most evocative are the stone circles, souvenirs of England’s misty, distant past. The most famous, Stonehenge, and a much larger, less-touristy stone circle at Avebury are both about an hour’s drive from Glastonbury. Most believe stone circles functioned as celestial calendars, helping early societies know when to plant, when to harvest, and when to party. Some believe that Stonehenge is built at the precise point where six “ley lines” intersect. Ley lines are theoretical lines of magnetic or spiritual power that crisscross the globe. They are believed to have been very important to prehistoric peoples, and more recently embraced by the New Age movement.

The geology contributes to the mystery of this land. Southern England’s shoreline is lined by famed white chalk cliffs. And that same white chalk is just below a thin layer of topsoil all across the region. Eons ago, all it took was a shovel and a little hard work to peel away the soil and transform rolling hillsides into works of art — or messages.

Travelers to this day are entertained by giant white figures popping out of these grassy green slopes. Many are creations of 18th- and 19th-century Romantics acting out against the coldness of the Industrial Age, but a few of these figures have, as far as history is concerned, always been there. One figure in Dorset, an hour from Glastonbury, is particularly eye-catching: The Cerne Abbas Giant, armed with a big club and an erection, is hard to ignore. For centuries, people fighting infertility would sleep on Cerne Abbas. As my English friend explained, “Maidens can still be seen leaping over his willy.”