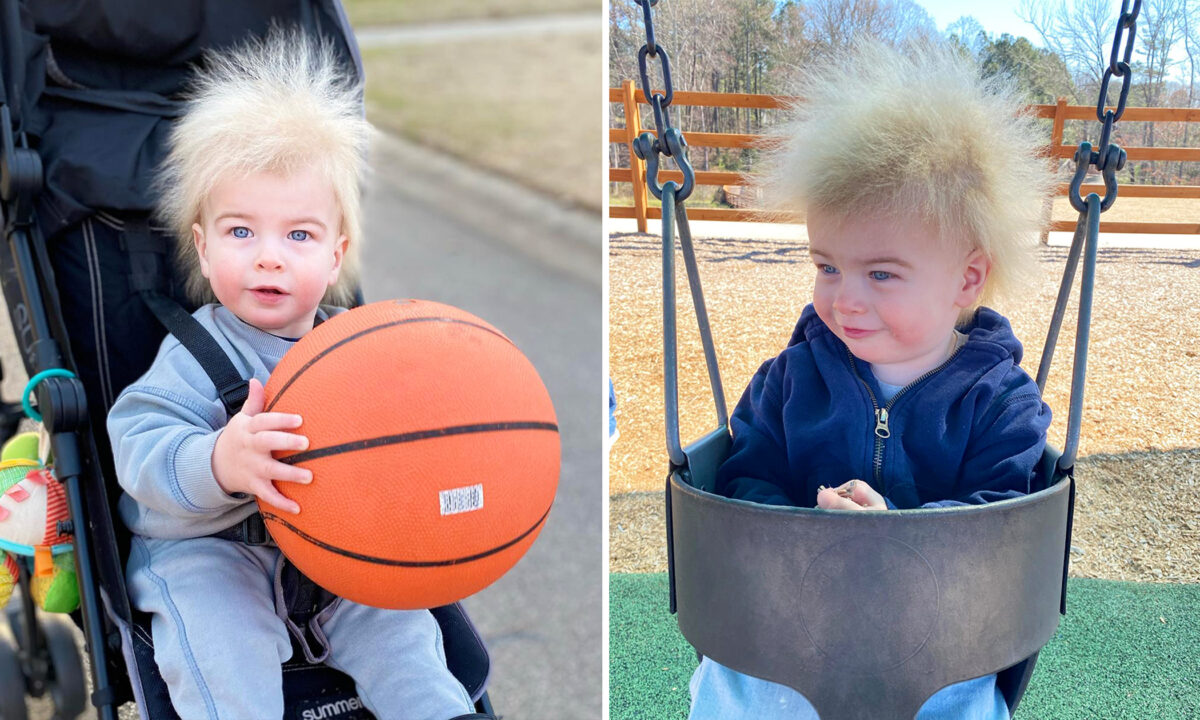 ‘His Hair Is a Blessing’: Boy With Rare Uncombable Hair Syndrome Brings a Smile to Faces

What do you get when you combine a 17-month-old’s big blue toddler eyes with a head full of adorably blonde stand-straight-out-of-your-head hair? A uniquely darling image and a guaranteed smile.

Katelyn and Caleb Samples, both 33, from Roswell, Georgia, are parents to two young boys. The youngest, Locklan, has a full head of “uncombable hair,” which, as it turns out, is caused by a genetic condition that makes his hair root and shaft take on a triangular, heart, or flat shape (or all of these shapes), rather than the more common circular or oval shapes. The result is a head full of erratic, fragile, “spun glass”-looking hair that mats easily and refuses to obey comb or brush.

While Locklan’s blonde-white hair may refuse management, it certainly does its fair share of drawing attention.

“Lock’s hair immediately makes people smile!” his mother, Katelyn, tells The Epoch Times. “He has such a gift to simply bring joy everywhere he goes.” She says that people are so curious that they even ask to touch Locklan’s unruly tresses.

Recognizing it was out of the ordinary, Locklan’s parents took him to a pediatric dermatologist, who analyzed samples of his hair. It turned out that Locklan’s exceptionally wild and adorable head of hair had an official diagnosis: “uncombable hair syndrome.” With very few confirmed cases of this kind out there—Katelyn says “roughly only 100”—there was little additional information for the family about it.

“We did learn his hair is fragile and may take a long time to grow. We also learned his hair may change completely during puberty. Another name for this hair is spun glass hair, and that really is a more accurate description of the looks and how fragile it can be,” Katelyn said.

Although no one else in the family was born with hair like Locklan’s, the Samples family has roughly a 25 percent chance that their future children might also have the genetic feature. They also learned that, while few, there are others out there with the same condition.

Soon after learning about it, Locklan’s father, Caleb, started an Instagram page titled “Uncombable Locks,” and the parents began posting photographs. They wanted to spread awareness of uncombable hair syndrome while also “spreading joy” online. The photographs of Locklan were met with smiles—and others with similar stories.

“I am finding many more possible cases though as I connect with families all over the world who think their kids may have it and just have been unaware,” Katelyn said.

For the most part, Locklan and the family have had a positive experience with his uncombable locks.

“The only thing we don’t like to hear is “we’re so sorry for your hair!” Because we aren’t sorry at all. His hair is a blessing. We are raising both of our boys to be proud of who they are and what makes them stand out,” his mother said.

Locklan certainly stands out, and his family sees it as an opportunity to cheer and help people.

“The world is such a dark place right now, we want to give people a reason to smile. I also want to be a source of information or guidance to parents who think their children may have the same type of hair,” Katelyn explained.

And regardless of public response, Locklan’s parents recognize the wonderful opportunity to teach their son, as they exhort him and others to “be confident and own what makes you unique.”