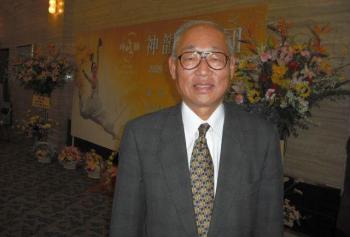 BY Mitsugu Sato TIMEFebruary 15, 2009 PRINT
HIROSHIMA, Japan—Divine Performing Arts (DPA) opened its first show in Hiroshima, a cultural city known as the international city of peace, on Feb. 15 at the at the ALSOK Concert Hall.

Hiroshima city assembly member Kenichi Tao has interest in Chinese poetry and recites poems as a hobby. Watching the DPA show for the first time, he was deeply impressed. One dance in particular caught his attention was The Poet's Vision.

“Li Bai is the poet I love so much. The dance takes Li Bai as the theme, and it is really charming and makes me like him [Li Bai] even more,” said Mr. Tao, admiring the creative story-telling of this excellent performance.

Even though this is the first performance of DPA in Hiroshima, people had high expectations of the show and had heard great things about it. Besides the local Hiroshima residents, people from other prefectures also came in groups using chartered buses and other means to enjoy the show.

Hiroshima residents have always endorsed peace as they suffered from a nuclear bomb attack during WWII. Along this line, Mr. Tao said, “I saw the dance about a father and how his family loses him in a violent attack. … It’s the most important thing in the world for a family to live peacefully.”

He was referring to the dance Heaven Awaits Us Despite Persecution that tells the story of a father who is persecuted in China for practicing Falun Gong.

Kenichi Tao also said he saw a theme of “culture from heaven” in the DPA performance.

“In Japan we also believe that there is God in every single thing, so we must respect and appreciate things. We need to keep this wonderful environment for our children and grandchildren.”

Mr. Tao praised the show highly, and said all the performances including all the dances and songs were outstanding.