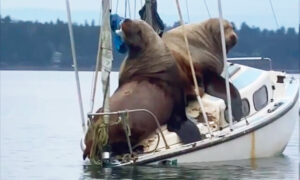 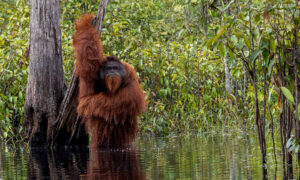 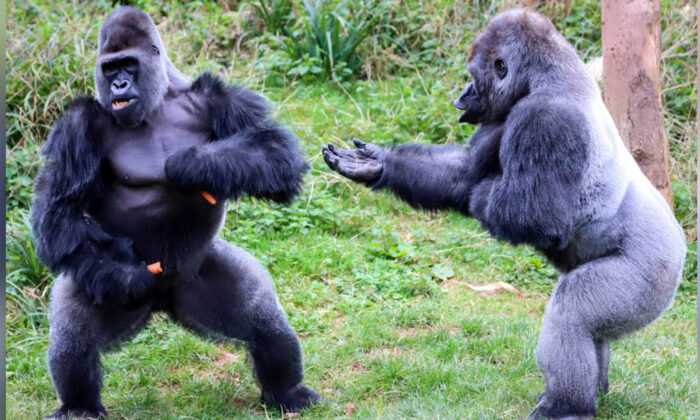 In the animal kingdom, food rights are no joke—even for those animal friends who live at the zoo, surrounded by caretakers and delectable treats at their disposal.

A pair of male gorillas named N’Dowe and Kivu was caught on camera whilst engaged in a heated debate over some vegetables at the Paignton Zoo in Devon, England. In 2019, a regular zoo visitor filmed their exchange on camera, snapping some stills as the commanding N’Dowe had some words with Kivu over some carrots. The more dominant N’Dowe seemed to be insisting the delicious veggies were his for snacking upon.

The problem? While N’Dowe seemed to want the carrots as his own, Kivu had already grabbed them. And clearly, Kivu didn’t seem to want to pass his treat off to the hands of someone else.

The photographer, who requested their name be withheld, described the whole shakedown between the two primates over a handful of fresh veggies.

“You can see N’Dowe walk out looking mean, approach Kivu and demand that he hand over the carrots he had already collected,” the photographer said, according to Caters News.

“Kivu backed off slowly, but did not hand over his carrots.”

According to the photographer, N’Dowe is the top-ranking gorilla at the zoo, which typically means that he gets first pick for food and that the other gorillas will defer to him. But clearly, in this case, Kivu decided that those carrots were his. Although the photos unquestionably show some drama between the two, the more submissive Kivu stands his ground in this instance.

The whole situation could have escalated. But luckily, there’s plenty of food at the zoo to go around; while N’Dowe didn’t get the carrots that he wanted, he did still end up with something tasty to snack on.

“So, from looking at his face, N’Dowe looked rather upset but was given some tomatoes by the keeper, so it was a happy ending,” said the photographer.

The pair of gorillas are both bachelors kept at the zoo, which is part of an international organization of zoos that help work with conservation groups to breed and preserve endangered species and plants currently living in captivity. N’Dowe and Kivu fall under that category.

The pair squabbling over vegetables play a vital role to that effect at the Paignton Zoo, where they get to socialize with other bachelor gorillas in captivity and spend time in a “social environment” before hopefully being transported to serve as the male heads of breeding groups elsewhere, states Paignton Zoo.

As serious as their roles are at the zoo, though, it’s hard to deny—when the pair get angry about food, at times, it’s more entertaining than anything.