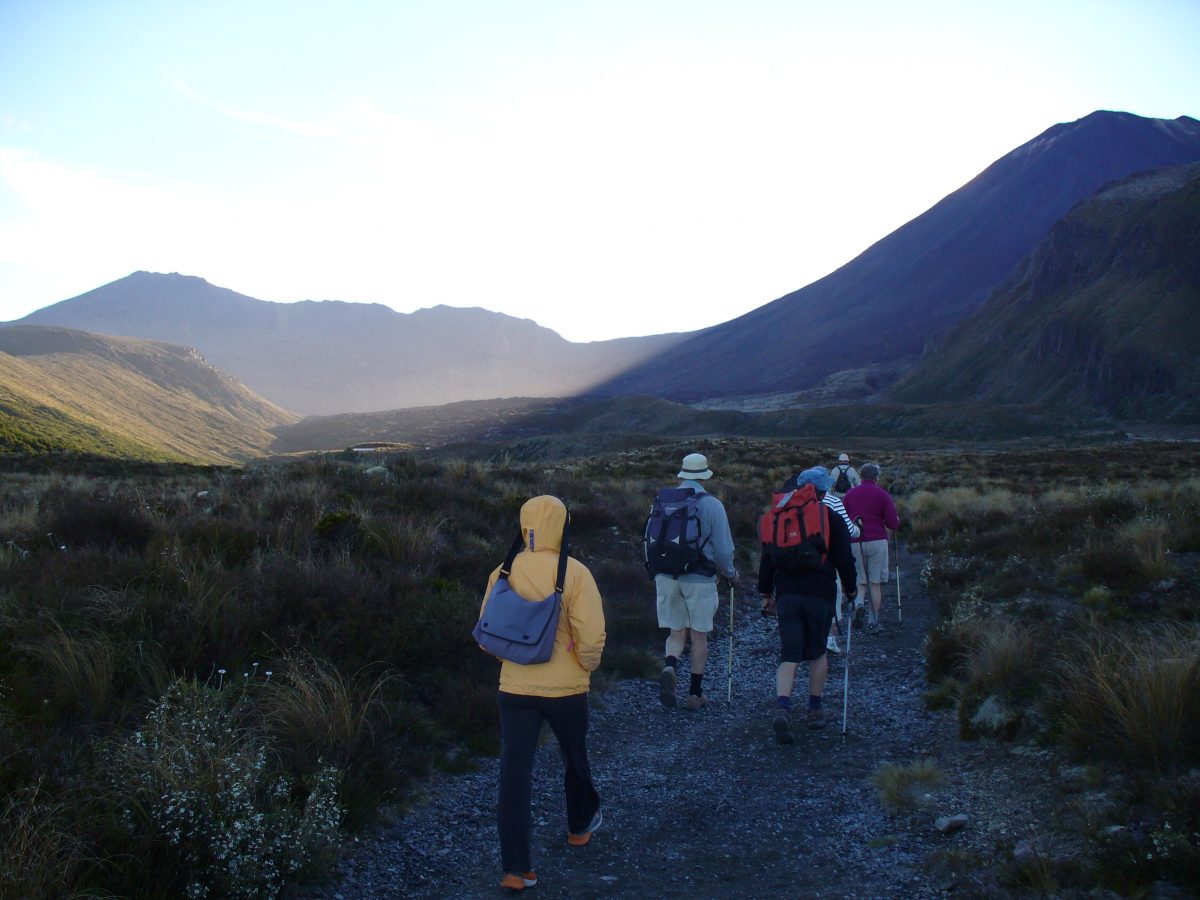 I have a mix of fear and respect for volcanoes. They are imposing, difficult to climb, and can erupt with little warning. However, when my husband and I visited New Zealand, our friends strongly recommended trekking amongst the volcanoes on the Tongariro Alpine Crossing, arguably the country’s most spectacular one-day nature walk.

Tongariro National Park owes its status as New Zealand’s oldest national park to a forward-thinking Maori (the indigenous Polynesian people of New Zealand) Chief who in 1887 gifted the lands of three volcanic peaks Tongariro, Ruapehu, and Ngauruhoe to the Crown so they could be preserved for all people. Today, this original gift covers an area of 200,000 acres, and has World Heritage status.

The Park is not too easy get to—in a desolate area about 200 miles from both Auckland (the biggest city) and Wellington (the capital). I was also warned that the trail closed often due to unpredictable weather and seismic activity. As recently as August 2012, Mt. Tongariro erupted, releasing a significant amount of ash.

The national park’s landscape is so unearthly that it was used to depict Mordor; home of the evil Sauron, in Peter Jackson’s famed films of J.R.R. Tolkien’s “Lord of the Rings” trilogy. However, out of respect for the Maori who believe the peaks to be Tapu (sacred), the volcanic summits were not filmed, and instead digitally recreated.

With all this in mind, my spirit for adventure awakened, and I geared up for a strenuous day to explore this volcanic terrain and other-worldly environment, complete with twisted lava formations, turquois crater lakes, and sulfur steam vents.

With husband in tow, I was off to Turangi, a small town about 30 miles away from the beginning of the Tongariro Alpine Crossing.

Mangatepopo Car Park to Soda Springs
It was an early morning start around 7:30 am when we left our rental car at Mangatepopo Car Park, which marked the trail-head. While the trail can be traveled in both directions, most hikers begin here as the other trail-head at Ketetahi adds an extra hour of inclined walking. We got a first view of the narrow path, lined with marker poles across an open, treeless plain of red tussock and small shrubs.

Despite being far from civilization, we were not alone. The famed route was busy on this summer morning. We set off with what seemed like another 100 hikers. Though thankfully, our varied strides quickly spaced us out along the trail.

The wind blew softly, the sun was shining, and broom heath blossomed everywhere. This imported plant grows wildly though we were told that it represents a threat to the ecological system and the endemic plants of the park.

Before long, we reached Soda Springs and a long queue announced the last toilet facilities before Ketetahi Hut at the end of the crossing (and being above tree line makes discrete outdoor bathroom breaks not so discreet).

Beyond here the trail climbed out of the valley directly up the volcano’s steep face. The leisurely stroll had ended abruptly because of what confronted us—the justly named Devil’s Staircase. This only partially fortified section of the trail involves climbing from 4,593 feet to 5,249 feet on a trail of old lava flow, rough basalt, and plated steps. This felt like murder on the muscles and joints, and soon I was exhausted.

“Come on, just to the next pole,” my husband encouraged me.

When we reached the summit, the view of the valley below and out across the surrounding countryside was worth every aching muscle. In the far distance looking back, I could make out a line of people approaching the incline, while Mt. Ngauruhoe (7,516 feet) rose majestically to my right.

Technically a secondary peak of Mt. Tongariro, Ngauruhoe is seen by most as a volcano in its own right, having erupted about 2,500 years ago. A separate trail leading up to its peak beckoned. With the thought of three additional hours of hiking, we opted to pass. At the end of the nearly one-hour climb, we reached South Crater.

South Crater looked like some strange land from a “Star Trek” episode. Its surface is yellow with scattered small rocks and barely any vegetation in sight. Ahead of us was already the next ascent to Red Crater, a disturbingly primordial rift of dark red and charcoal grey.

Not quite as strenuous as the Devils Staircase, we quickly reached the highest point of the crossing (6,188 feet). Sitting down despite the wind chill (I had put some gloves on by now), we were surrounded by spectacular views. Feeling as if on top of the world, we looked down the rocky crater we had just passed, watching ant like-figures walking towards us.

Mt. Ngauruhoe stood imposingly behind the crater, while the even larger snow-capped Mt. Ruapehu dominated the sky behind it. Looking ahead of us, we could see the famed Emerald Lakes.

The descent from Red Crater invited haste as the mesmerizing trio of turquoise and emerald-colored lakes promised a photo opportunity and welcome resting spot, but it was dangerous as loose ash and sand kept shifting and sliding beneath our feet.

After 30 minutes of hiking, we arrived at the lakes whose vibrant colors stem from minerals released from the surrounding rock. Clouds of steam vented from the earth with a pungent stench of sulfur revealing its volcanic source. Despite the smell, the scenery was too beautiful to give it a second thought.

We continued walking across the open plane—Central Crater, before arriving near the wide, round Blue Lake. The lake is Tapu for Maori and it’s considered disrespectful to eat or drink around its shores.

A short easy climb to the edge of North Crater rewarded us with more fantastic views. We could make out Mt. Pihanga and Lake Rotoaira, with the much larger Lake Taupo in the far distance. This crater was once filled with molten lava and then cooled and solidified to give a level surface more than 3,300 feet wide. The following zigzagging walk led us down to Ketetahi Hut where it’s possible to stay overnight.

However, camping is not an easy option unless you have a friend to carry all the extra gear you’ll need. For us the hut was a timely opportunity to fill up water, have a quick snack, and shed our warm clothing now that we had descended back into summer. From here the trail continued to twist downhill.

For the last two hours the trail led us adjacent to a stream that drained down from Ketetahi Springs, a privately owned part of the park, and minerals had visibly stained the rocks. Next to the walkway, hot steam erupted in plumes at various spots and signs warned to stay on the path.

Soon we noticed the first traces of vegetation. Small scrubs and flowers turned into a rain forest with native trees, ferns, and birds as we submerged back below tree-line. The shade was a welcome change from the hot sun, and the water reminded us that we were close to the end of our 12-mile walk.

We arrived a full hour before the agreed pick-up time for our return transfer. I momentarily regretted having not spent more time at Red Crater or the Emerald Lakes. However, the feeling of exhaustion gave way to a humble sense of accomplishment. We were elated and grateful for our time amongst the Maori’s Tapu Tongariro Alpine Crossing.

Wibke Carter
Follow
Wibke Carter is a travel writer who hails from Germany. She has lived in New Zealand and New York, and presently enjoys life in London. Her website is WibkeCarter.com.
SHARE
Friends Read FreeCopyFacebookTweet
You May Also Like