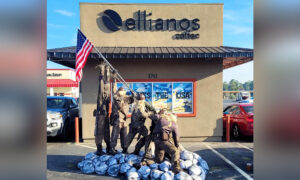 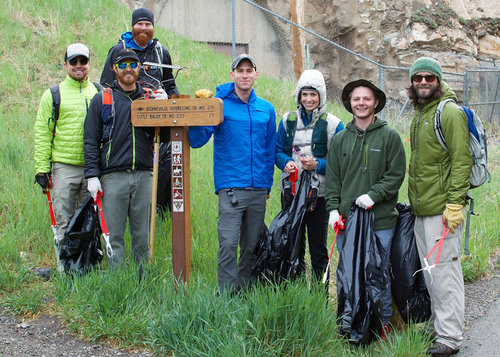 Hiking Friends Inspire Thousands to Clean Up the Trails

“Together, we all positively can be erasers of litter.”
By Emily Chesnic

Though well into adulthood now, Bill Willoughby can recall with clarity the exciting expeditions his grandfather would take him on through the “breathtaking” backcountry.

He can still visualize the vivid views from times in Missoula and Helena, Montana—and the conversations they would have on their explorations concerning the importance of conservation.

During one special trek, his grandpa taught him how to survive in the woods and demonstrated that he, even at the age of 12, could care for the wilderness so others would experience its majesty for years to come.

“On that hike, we came over a hill and saw the valley below and it was the most beautiful site. My grandfather told me, we were seeing what our forefathers saw. He cautioned that I would want my own grandkids to see this same amazing scenery, so I better not screw it up,” Willoughby fondly recollected during an interview with Humanity.

Willoughby’s grandfather helped him develop a sense of ownership of the world he carries with him today, and challenged him to find ways to preserve its natural state of splendor, which he does not stop doing, even now as a successful and busy professional in international business development and telecommunications.

During the past 30 years, the California native has lived and traveled for work throughout the United States, Europe, and Asia, venturing to areas few others have traveled, which led to his strong conviction to keep public property free of debris.

But it wasn’t until he saw a fellow hiker’s litter habits that this conviction grew.

Steve Jewett, who grew up in Kansas City, Missouri, was just a young boy when he first fell in love with the outdoors and recreational opportunities it offered his adventurous spirit.

“My dad started me in scouting and my connection to the outdoors really was felt immediately,” he said.

Since Kansas City is quite flat, Jewett’s desire to reach new heights led him to a life of hiking and skiing in Colorado.

Jewett, now a prosperous entrepreneur and inventor, has climbed all the peaks in Colorado that are at least 14,000 feet in elevation or higher, and summited Denali in Alaska and Aconcagua in South America.

Through the years, Jewett developed a strong desire to positively impact the world around him. It led him to serve as a mission coordinator for mountain rescue operations in Colorado.

“I have always believed in paying it forward,” he said.

Upon meeting each other as adults, Willoughby and Jewett quickly developed a friendship based on a mutual love of laughing and staying active.

They began taking hikes together, and it was then that Willoughby would observe Jewett stuffing garbage—such as water bottle lids, candy wrappers, plastic bags, and cigarette butts—into his pockets to properly dispose of later.

This effort reignited that passion in Willoughby to keep his favorite trails clean.

Together, they began bringing bags for trash during their hikes and even would use barbecue tongs and their own litter grabbing gadget inventions to pick up debris they did not want to touch with their bare hands.

They made their litter clean up efforts into a game, and other hikers took notice.

“Soon they wanted to join in on the good time,” Willoughby said to Humanity. “I would point the litter out to Steve, but if he spotted a piece of trash that I missed, he would loudly proclaim, in an irritating voice, that I missed one. We were having fun and others were catching on.”

The game, and the discussions they had while hiking, led to a desire to create a nationwide movement to take care of public land.

Nine years ago, the friends decided to turn that desire into reality.

Jewett said studies show the highest indicator an individual will pick up litter is if he or she sees someone else picking it up.

The more people whom have seen he and Willoughby remove trash off the trails, the cleanlier the trails have remained the next time they returned, Jewett said.

Clean Trails, the friends’ nation-wide, non-profit organization began to keep the country’s wildlands and the trails that access them free of litter.

“Core to our beliefs is the notion that people want to do the right things, all they need is a little encouragement,” Willoughby said. “We believe that people are responsible by nature, and just need to be shown how to pick up after themselves and others.”

“Our job is to show them the way and in a lighthearted manner,” he said.

Through Clean Trails, Willoughby and Jewett work to bring aboard ambassadors all around the United States, serving as trail stewards to promote clean trail etiquette and advocate for responsible use of public property.

Jewett said the ambassadors are instructed never to point out or scold someone they see littering along a trail.

Their goal is not to offend, but to encourage. Some people simply forget, and a gentle reminder can help the idea stick.

“Go along a trail or into a park committed to leave it better than you found it,” Jewett said.

The organization’s co-founders share their viewpoints around the country to school-aged children and adult groups and excitedly encourage outdoor responsibility by all.

“We are their cheerleaders, and this has caught on like crazy,” Willoughby said. “Together, we all positively can be erasers of litter.”

Willoughby said their battle cry to those who join their organization is “if you are not having fun, you are doing something wrong.”

The pair continue to encourage hikers to pick up at least one piece of debris each time they are out enjoying the outdoors.

Currently, Jewett and Willoughby are planning for Clean Trails’ second National CleanUp Day, held in conjuncture with World CleanUp Day, on the third Saturday in September.

Now, they are inviting people and other groups to take part in the event this year on Sept. 15.

In 2017, Clean Trails calculated 225,000 people participated in National CleanUp Day in the United States, Willoughby said. They only had a few weeks to put together the event and get the word out then, so this year, the number of participants has increased shot up tremendously.

This year, there are already 10 million sign-ups. The goal is to have 15 million volunteers, and at the rate people are joining in so far, Jewett is optimistic about hitting that number.

Individual and groups are signing up all around the country now to do their part on National CleanUp Day to keep America beautiful from “sea to shining sea,” which is this year’s theme, Jewett said.

“Literally, we do this for our love for our country and our world and want others to do so, as well. Look around and make the world what it should look like for years to come,” Willoughby said.