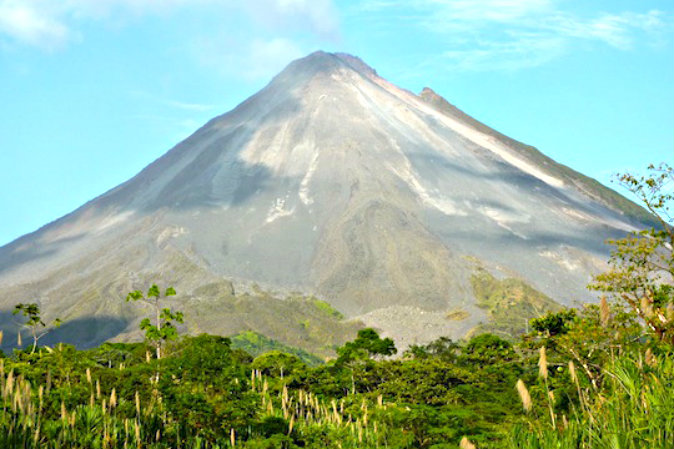 As I make my way through the dense jungle, the diversity in fauna and flora keeps surprising me. The further I go, the louder I hear the sound of splashing water … at the end of the trail, I see a beautiful waterfall nestled amidst the forest surrounded by a little pool of water. I take a well-deserved rest here on one of the rocks while birds are chirping around me in an incessant cacophony. On the way back, I just cannot take my eyes off the impressive Volcano looming up in the background. I’m in Arenal Volcano National Park in Costa Rica, Pura Vida!

Towering at more than 1600 meters, the beautiful and majestic Arenal Volcano is a spectacular sight. Its last massive eruption was recorded in 1968 when it destroyed the popular hot-spring town of Tobacon. The closer I get to the volcano, the more excited I get and the more difficult it becomes to suppress my urge to witness nature’s fury from an unbelievable close range. It’s still light and so far I’m unable to discern any activity. In order to utilize my time fruitfully I visit this really interesting little Museum of Vulcanicity which is also located on the premises after which I wait for sunset.

Once it starts getting dark, the air gets charged with contagious enthusiasm and nervous anticipation. Will it be a clear night or will the clouds once again play spoilsports? Luckily for us it turned out to be a very clear night and it was in total amazement that we watched – spellbound from the observatory platform – the volcano throwing out orange rocks of lava. Truly dramatic was the manner in which a small stream of lava rolled downs the slopes of the Volcano. I will never forget this sight, it was truly incredible and had me completely hypnotized. Till this date, this vision is clearly etched in my memory. To end this perfect day, we went for a relaxing soak in the Tobacon Hot Springs located in a beautiful garden.

We visited Arenal Volcano National Park beginning 2010 as part of our Costa Rica Pura Vida Road Trip. We were incredibly lucky because Arenal’s inactivity began in October 2010 and it’s still dormant now in spite of almost three years having rolled by. Nevertheless this natural heaven is definitely worth a visit even without volcanic activity and Arenal Volcano remains one of the most photogenic volcanoes in the world.

*Image of Arenal Volcano via Shutterstock