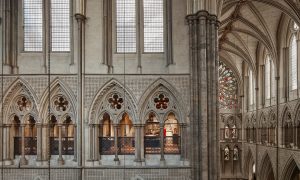 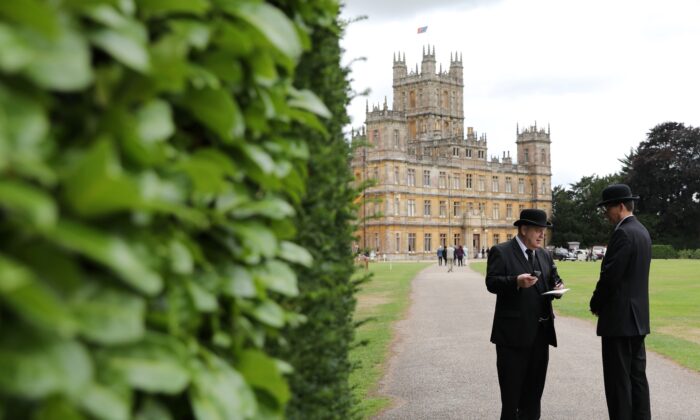 Visitors attend a 1920s themed event ahead of the world premiere of the “Downton Abbey” film on Sept. 7, 2019. (ISABEL INFANTES/AFP via Getty Images)
Fine Arts & Craftsmanship

Larger than life: Art that inspires us through the ages
By Epoch Times Staff
Print

Highclere Castle, in the southeast of England—known to many as “Downton Abbey”—existed long before the fictitious drama captured the hearts of millions of television viewers around the world.

The Domesday Book of 1086 records the original settlement on the Highclere Castle site, but the site dates back even earlier to 749 and the Bishops of Winchester. The Highclere estate site has been transformed over the years since the first settlement. A few notable examples: In the late 14th century a beautiful palace with delightful gardens was built there for the Bishops. Then, in 1679, Highclere Place House was built when Sir Robert Sawyer bought the estate.

The Highclere estate has been owned by the same family, Saywer’s descendants, for more than 340 years.

The third Earl of Carnarvon commissioned architect Sir Charles Barry to remodel the manor house, creating Highclere Castle, as we know it today, in 1842. The resulting Jacobethan-style of Highclere Castle took inspiration from the architecture of both the Elizabethan (1558–1603) and Jacobean (1603–1625) periods, spanning a time that was considered the English Renaissance. From 1837 to 1860, Barry famously remodeled the Palace of Westminster (the Houses of Parliament) in the Gothic Revival style.