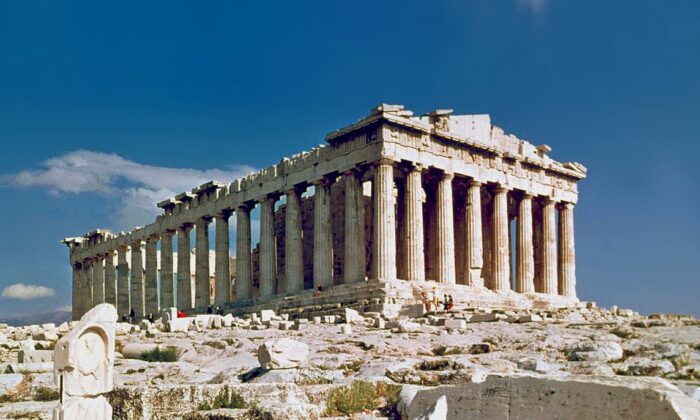 Here’s Hoping for Beauty in America: Classicism Versus Modernism in Architecture

One of Donald Trump’s final acts as the nation’s 45th president was to sign an executive order called “Promoting Beautiful Federal Civic Architecture.” He signed the order on Dec. 18, 2020, but it had been kicking around for many months since it was leaked from the White House last winter as a draft proposal with the more Trumpian title of “Making Federal Buildings Beautiful Again.”

At the time, it elicited raspberries from architects of all stripes but support from some, possibly most, classicists. Recently, on Feb. 24, Biden issued his own executive order canceling his predecessor’s tip of the hat toward beauty.

The result of the survey was no surprise. Anecdotal evidence and occasional academic research had shown such tendencies for decades. It was as if the survey had discovered, of all things, that people prefer beauty over ugliness.

The Modernist Goal: ‘We Must Kill the Street’

But isn’t beauty in the eye of the beholder? That is certainly the official stance of the architecture community, which has been staunchly pro-modernist since World War II. But many factors affect our perception of beauty, which is also located in the object of the beheld. Unlike classical and traditional architecture, which are based on a system of ornamented structure from ancient Greek and Roman times, modern architecture arose mostly after World War I.

The founding modernists, such as Le Corbusier and Ludwig Mies van der Rohe, invented a system of design based on structure shorn of ornament. Many people understandably blamed the crowned heads of Europe for the war’s slaughter, but these architects took that a step further, likening the crowns of royalty to classicism’s roof cornices, blaming the bloodshed on the buildings, as if the proper response was not to change Europe’s ruling aristocracies but to change their buildings.

The public never took to modern architecture. In 1925, Le Corbusier proposed leveling central Paris and replacing the Marais district with 18 widely spaced 60-story tower blocks. The Parisian government rejected his scheme. (Oh, to be a fly on the wall at that meeting!)

In 1931, the popular journalist and editor H.L. Mencken wrote in an editorial for his American Mercury magazine: “The New Architecture seems to be making little progress in the United States. … A new suburb built according to the plans of, say, Le Corbusier would produce a great deal more mirth than admiration.”

Corbu, as his acolytes called him, shrugged all this off and went on in 1933 to write “The Athens Charter,” which promoted the construction of modernist buildings in historical settings to highlight the contrast between the old and the new, but also recommended the demolition of as many old buildings as possible. After World War II and no doubt to H.L. Mencken’s dismay, modernism crossed the Atlantic to America, and the charter helped shift U.S. architecture and city planning in the 1940s and ’50s toward modernism and urban renewal.

Yet the dirty little secret of the modernists was that the lack of ornament and the rejection of traditional beauty faced considerable skepticism among the public. For modernists, eliminating the competition represented by traditional architecture would become a lifelong obsession. That elimination would make it easier for a new society, led by architects on behalf of socialism, to make headway in a democracy.

“We must kill the street,” wrote Corbusier, who hated the disorder represented by humans’ freedom to act as individuals. “We shall truly enter into modern town planning only after we have accepted this preliminary determination.” Most architects know little or nothing of the deconstructivist philosophies that underlie their professional practices to this day. They revere Corbusier without understanding him, and they need only build as they’ve been taught to carry out Corbusier’s vision as expressed in such volumes as “Vers une architecture” (“Toward a New Architecture,” 1923).

Who Knows More About Architecture?

In 1962, the federal government effectively mandated modernism for federal buildings and courthouses, but in 1963 a fateful decision doomed the monumentally classical Pennsylvania Station in New York City to demolition. This was a tragedy that sparked a historic preservation movement among Americans already anxious to avoid losing their neighborhoods to modern architecture and planning. And yet, backed by corporate elites, modernism firmly established itself in every center of power in the field but one—the housing industry—where individuals rather than committees still built or purchased their own homes. As confirmed by the Harris survey, the public has resisted decades of propaganda and coercion, and remains decidedly averse to modern architecture.

For who in society, from top to bottom, has not experienced architecture on a day-to-day basis since birth? We all have, from the houses we grew up in to the houses of neighbors we played with as children, to the schools we attended and the museums and monuments we visited with our parents, the theaters, galleries, restaurants, shops and stores, nightclubs, houses of worship, shopping districts, colleges and universities, city and town halls, government agencies, amusement parks and stadiums we worked at or enjoyed ourselves in as adults again and again, for hours every day, day in and day out, for years and years and years.

Those of us who judge the other arts—cinema, theater, painting, sculpture, literature, and the rest—have terribly limited experience on which to judge compared with that we bring to our judgments of architecture. We may not be capable of designing a house, but given a choice we can certainly decide which of two houses we find more pleasing, which of two buildings we find more efficient.

People have every reason to be confident in their preference for beautiful architecture rather than architecture that professional architects have decided is functional—often in spite of technical flaws, inefficiencies, and endless lawsuits over leaks from flat roofs.

Among the modernists’ conceits is that any building deemed functional is by definition beautiful. All but a handful of architecture schools in the United States and around the world are strictly modernist in their curricula, and their first job is to eradicate traditional concepts of beauty from the minds of young students. The result is that on the basis of experience rather than training, the average individual has more sophisticated ideas about architecture than the average architect. This is confirmed by studies that demonstrate how differently buildings are judged by professional architects and the public.

A Look at the Science

While modernist architects claim that science supports their focus on function and technology, advances in neurobiological research indicate that human preferences reflect brain functions tracing back millions of years to survival techniques on the savanna of Africa. Specificity of detail trumps abstract generality in the ability to spot dangers in the natural environment. The perception of the shape of the nose of a lion, visible behind a distant tree trunk, could preserve a life.

The human brain has evolved since then, but the need for detail remains strong—consciously and subconsciously—explaining at least in part the preference for ornament in buildings. Eye-tracking research demonstrates that our visual perception is drawn to detailed surfaces and avoids blank surfaces. Research shows that patterns of biological regeneration tend to reflect the slow development of traditional architectural practices, which unfold generation by generation as builders find better ways to perform age-old methods of construction and design more effectively than the modernist practice of “starting from zero.”

Unlike modernist buildings, traditional buildings become more interesting the closer you get. This reflects nature and natural biological behavior, whereas the substitution of design practices inspired by machinery in the modernist toolkit result not only in deeply divergent results as measured by beauty, but also as measured by the efficiency that modernists claim as their lodestar.

All of these factors, some newly revealed by research and others dating back centuries or millennia, have caused generations of architects to shy away from beauty as a topic in professional and academic discourse.

Modernists are like Dracula confronted by the holy cross. Their incantation that “beauty is in the eye of the beholder” cannot be sustained for long, even after President Biden’s killing of President Trump’s executive order on behalf of beauty. In the end, beauty will out.

David Brussat has run the Architecture Here and There blog since 2009, and wrote a weekly column on architecture for the Providence Journal from 1990 to 2014. He lives in Providence, R.I.