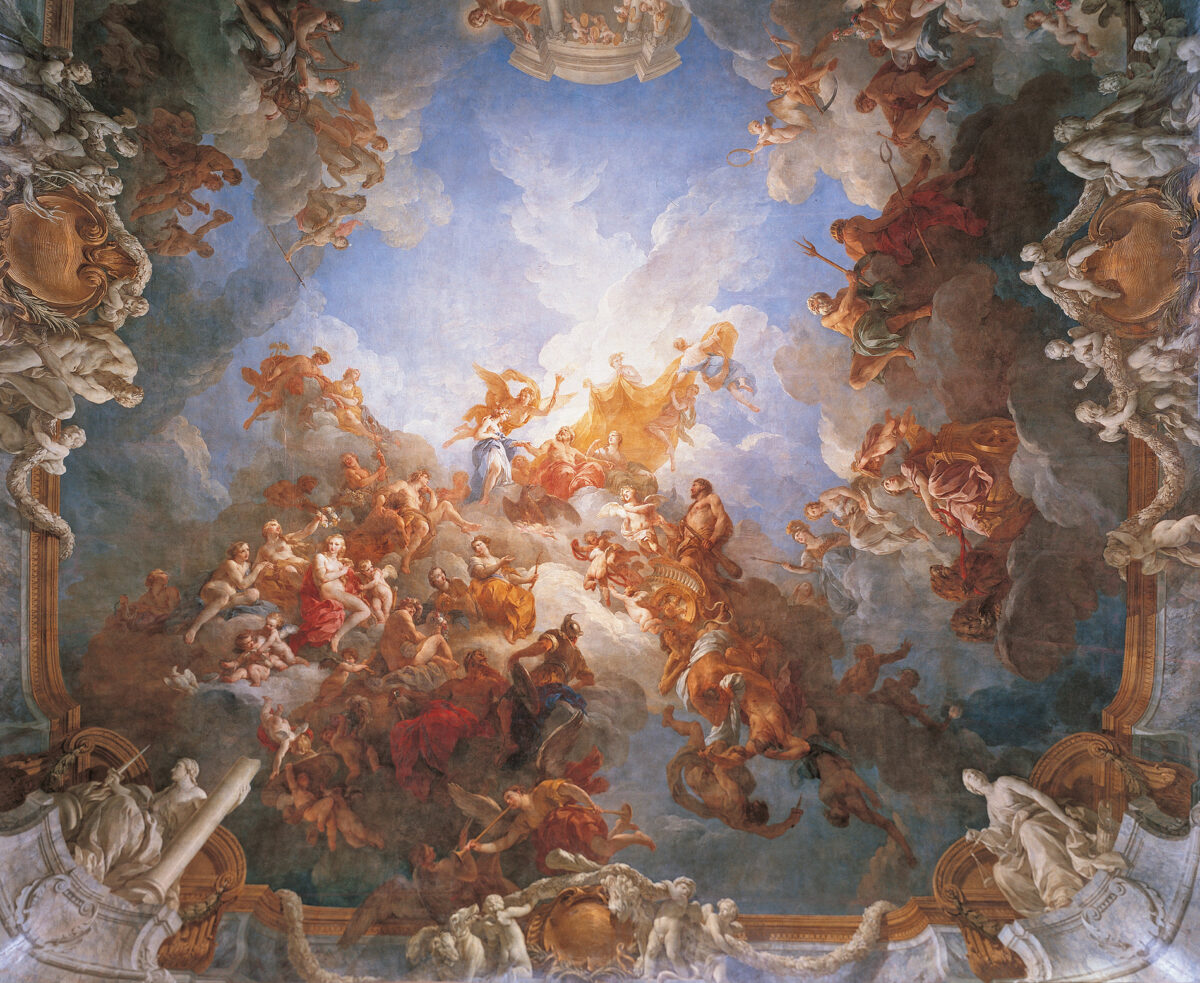 "The Apotheosis of Hercules" by François Lemoyne, in the Salon of Hercules at the Palace of Versailles. (Public Domain)
Arts & Tradition

Hercules and the Love of Virtue

Our human destiny is to rise above vices
BY Ludovic Genin TIMEApril 28, 2022 PRINT

Who do we remember as the greatest ancient hero of them all? Hercules. Legend says that the gods honored him for his achievements by granting him apotheosis, or ascendance to the heavens. The powerful 17th and 18th century French kings commissioned magnificent art, including a ceiling painting to celebrate the achievements of the renowned hero and pay homage to the virtues inherent in his character.

François Lemoyne took four years to complete “The Apotheosis of Hercules” on the ceiling of the Salon of Hercules at the Palace of Versailles. When the artist began the mural, he had already been trained in the best techniques of Italian painting in Paris at Louis XIV’s Royal Academy of Painting and Sculpture. The purpose of the academy was to gather, preserve, and perfect the classical arts.

Initially, Lemoyne wanted to paint the glory of the French monarchy and the royal line, sovereign after sovereign. “Through the achievements of the greatest French kings, such as Clovis, Charlemagne, Saint Louis, or Henry the Great, the painter wanted to recognize their immortality,” wrote Donat Nonnotte, a former student of François Lemoyne, in his treatise on painting delivered at the Academy of Lyon.

But Louis XV selected the Apotheosis—a subject that glorified virtues—to decorate the ceiling of the former royal chapel in the palace, and the work was finally completed in 1736. Louis XV took the throne officially a few years later, in 1743. The people called him “the beloved.”

But by the end of his reign, Louis preferred the softness of his many mistresses’ salons to the cool but important solitude of the palace of a great monarch. This decadence began a period of decline in rational thinking that would eventually lead to the unprecedented destruction of French culture at the end of the 18th century by the French Revolution and the Reign of Terror.

Three centuries later, the colossal work “The Apotheosis of Hercules” continues to address the destiny of humankind and the tools given to us to rise above our human flaws.

‘The Apotheosis of Hercules’

The work of art, 59 feet long by 39 feet wide, is the largest painted ceiling in Europe with 142 figures, 62 of which can be seen at first glance. Near the figure of Hercules are nine groups of figures: Apollo on the steps of the Temple of Memory, Bacchus and the god Pan, Mars observing the fall of the monsters, the Renowned Ones announcing Hercules’s apotheosis from earth, the god of the winds Aeolus, Pluto and the god of the sea, the Muse of Fine Arts, and other muses and angels.

In a poem published in the Mercury of France magazine in October 1736, Antoine Joseph Dezallier d’Argenville summarized the meaning of “The Apotheosis”: “The Love of Virtue elevates a man above himself and makes him superior in the most difficult and perilous labors; obstacles disappear at the sight of the interests of his King and his Fatherland. Supported by honor and led by fidelity, he arrives at immortality by his actions.”

Only the Love of Virtue Can Overcome Monsters and Vices

In “The Apotheosis,” the hero is shown riding to heaven in a chariot, guided by an angel called Love of Virtue. This angel, accompanied by putti who pull the chariot of the half-god, presents Hercules to his father Jupiter. Jupiter is seen offering the goddess of youth, Hebe, to Hercules. She is led to him by the goddess Hymen.

As he ascends to heaven, Hercules encounters monsters and vices that try to hold him back but are easily overthrown. Because the hero chooses to be guided by Love of Virtue, the monsters and vices cannot endure his glorious progress and grimace as they are thrown down.

Four allegorical figures that represent the cardinal virtues sit at the corners of the painted ceiling. These symbolize the values of the hero: Strength, Justice, Temperance, and Prudence. They portray the character of the new Hercules as he elevates to the heavens.

At the time of the painting, these words had a different meaning than they have today. They belonged to a culture linked with the divine and contained messages about man’s destiny. Strength, for example, did not mean physical strength but the mental strength of courage and fortitude.

Justice signified steadfastness and a resolve to give everyone their due. Temperance meant the control of one’s will over instincts, and the keeping of desires within the limits of common sense. Prudence was embodied in practical wisdom and reason that allowed one to discern true good from true evil.

The virtues displayed in this ceiling painting are in direct opposition to vices that besiege man. The first of these vices is Envy (Jealousy). The rest follow, shown in the painting by hideous and tortured figures. Among them are Anger, Hatred, and Discord, which the newly installed god finally triumphs over through Love of Virtue.

Envy (Jealousy) is closest to the hero. In the 18th century, this monster was considered “the most dangerous and the most relentless of all the vices, and the only one whose rage extends beyond death,” as described in the Mercury of France magazine of 1736. It is not Hercules’s strength but the Love of Virtue, when accompanied by the four cardinal virtues, that allows him to face and to defeat these relentless vices seeking to destroy him.

The Universal Message of French Art in the 18th Century

The stroke of genius by the French at the end of the “Grand Siècle” (Great Century) was to unite the classical arts by merging the sacred with reason. French art academies transmitted this to society as French classical arts which, in turn, merged the deep meaning of a work of art with its intrinsic beauty.

Three centuries later, when our world has never been so uprooted and cut off from the glorious culture of our past, monsters and vices are redoubling their efforts to make humanity forget its divine destiny. But works like “The Apotheosis,” with its ancient and universal virtues, enable us to see an upright man overcome all difficulties, pursue the good in all endeavors, resist destructive temptations, and ultimately ascend to heaven.