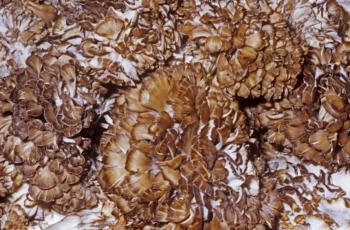 Hen of the Woods or Maitake Mushroom

Paul Wilson-Young
View profile
Follow
biggersmaller
Print
Hen of the Woods or Grifola frondosa can be as big as forty or fifty pounds. Grifola frondosa, also called Maitake in Japan, has a fabulous flavor and a firm texture that lends itself to almost any culinary application. It is usually bug free, at least inside the flesh. You usually have to pick over it, but unless it's very old you won't find a lot of bug larvae. This mushroom is easy to store. Just chop it up into small, cooking-size pieces and store them in freezer bags in the freezer.

Hen of the Woods is basically a fall mushroom, but summer and even spring sightings have been reported. Grifola frondosa grows anytime from early September to late October and seems to be triggered by the first chilly nights at the end of summer. It is found mostly with dead or dying oak trees, though one can find clusters under a dead maple and other trees. Once you find one, if you go back the next year and you may find it in the same place again.

Hen of the Woods is variable in color, from pure white to gray to tan to brown. It appears to get darker depending on the amount of direct sunlight it gets. Large overlapping fronds grow in bushy clusters that get larger with time. Each frond is from a half to four inches across and is usually darker toward the outward edges of the caps. The entire body can be as big as several feet across. The underside of individual caps consists of a pure white surface. Grifola frondosa is a polypore, a mushroom that disperses its spores from pores as opposed to gills. The pores are close together and tiny, somewhat difficult to see. The caps are firm and juicy. The stem is thick, firm, white, and branched.

This species is typically associated with oak. So it is best to seek it during autumn around the base of large oak trees (living or dead) and stumps. Other known hosts include elm, maple, beech, chestnut, and sycamore. It has also been reported with pines and other conifers. This mushroom has been known to produce specimens under big oak trees annually for many years in succession.

It is a very distinctive species with no dangerous look-alikes, making it a very good choice for the novice mushroom hunter. Old specimens tend to be bitter, fibrous, or both. My advice is to collect only very fresh specimens. Avoid specimens from potentially contaminated habitats Also, Hen of the Woods grows around sticks, twigs, and leaves, so it is sometimes necessary to take a good deal of time to pick apart a specimen to make sure that no forest debris ends up on your plate.

As with all wild mushrooms, it is better to purchase mushrooms directly from a trusted source than trying to figure out whether or not they are edible.