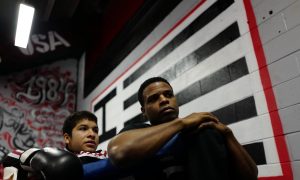 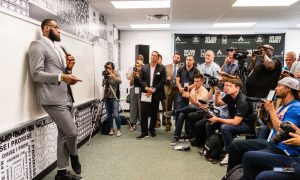 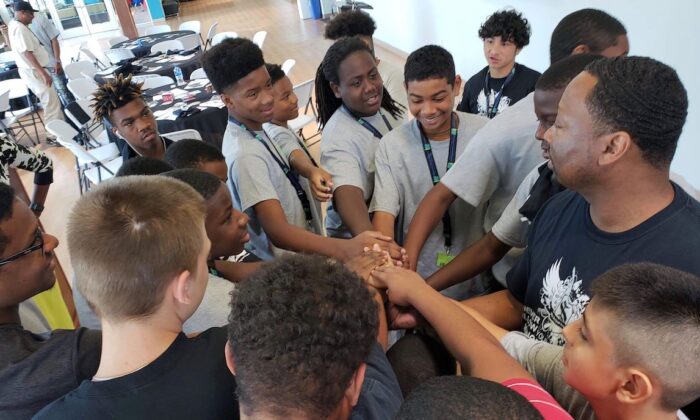 Helping At-Risk Youth: ‘You Can’t Teach a Kid Until You Can Reach a Kid’

Raised by his grandmother and an alcoholic uncle just outside of Wilson, North Carolina, Sean Ingram grew up in abject poverty. His mother was in the throes of substance abuse at the time, and he didn’t meet his father until age 8, after his father was released from prison.

And yet, growing up in an environment of poverty and crime, Ingram found an outlet through the creative arts—specifically creative writing. He had been diagnosed as manic depressive and discovered that creative writing balanced him.

“I found writing as a gift. A lot of the times when I didn’t understand how to cry, I would just write out my pain, and unbeknownst to me that it would actually be a blessing one day, and actually be my career,” said Ingram, 42, who now runs an academy to help at-risk youth and nurture their talents.

Ingram’s talent for creative writing wasn’t discovered until a teacher caught him writing prose and poetry while he sat in the back row of a social studies class. Word quickly spread among the teachers that Ingram had a talent for the written word, and an English teacher named Mr. Clarke quickly took an interest in him.

At first, Ingram kept his passion to himself because it wasn’t socially popular at the time to be a writer or a poet. However, after his fellow students discovered that he was a writer, it was, in fact, cool. He was a popular kid, and got along with everyone.

Despite his talent, Ingram grew up in an environment surrounded by crime. However, Ingram didn’t view crime as out of the ordinary, particularly because the people involved in it were close to him.

“These were good people. These were uncles, these were cousins, and friends of the family, and well-respected men. They chose another side of life, which was crime, so in a sense, I guess I grew up thinking this was a way that you support your family if you don’t have a job,” Ingram said.

By age 14, Ingram found himself selling drugs and engaging in street robberies. Ultimately, Ingram’s criminal activity would escalate, and become a major turning point in his life.

Ingram’s cousin had been scrambling for money to pay back drug dealers in the neighborhood and hatched a plan to rob a bank. Ingram and other cousins didn’t want to let him go through with the robbery by himself and decided to help him.

“Of course, now, 15 years later, you’re thinking there were a lot of other options,” Ingram said with a chuckle.

Ingram and his cousins were arrested a couple of days later, and the 22-year-old was ultimately sentenced to five years for robbery in 2003 at Butner Federal Prison. While incarcerated, he returned to his writing, which kept him focused. During that time, he wrote “The Passion of the Pen,” a collection of essays and short stories.

“My goal for that book was to be very creative. To push myself creatively also, but I wanted to start writing things that make people think, that would be thought-provoking,” Ingram explained.

He also went to trade school for heating, ventilation, and air conditioning while in prison, and found a job at a refrigeration company after his release in 2007. After working for the company for eight years, Ingram started the Sean Ingram Creative Arts Academy in Raleigh, North Carolina, for at-risk youth in an effort to nurture their skills and interests.

“I wanted to create an academy [where] creative minds could come together and say, ‘You know what? I’m not an outsider. I’m not a loner. I’m not by myself because I choose to draw all day’ or ‘I’ve got this dream of being a painter’ when everybody else doesn’t,” Ingram said.

The organization’s mission is to transform at-risk youth and those in juvenile detention into productive citizens. Young people are referred to him by parents, the Raleigh Police Department, the Wake County Public School system, the Department of Public Safety, and the juvenile court system.

Ingram and his organization focus on participants’ passions and help them develop their skills. Ingram also helps the young people he works with turn their passion into a marketable profession so they can make a living doing what they love. For example, the organization may advise a young person who is interested in the visual arts to go to art school to sharpen their skills. Ingram also brings in speakers from a variety of creative professions to help mentor and teach those who may want to pursue a similar career.

Ingram also provides trade skills so the young people in his program can find gainful employment, and make them less likely to become incarcerated or return to prison. He refers young people to trade schools in industries such as cosmetology, construction, trucking, and HVAC.

“Once a kid can actually financially succeed on their own, then they don’t have that big stress or need to be in a situation that’s going to lead them back into prison,” Ingram explained.

Ingram and his academy have made an incredible impact on the young people they work with. One participant has gone on to college and plays NCAA football. Another young person in the program has gone on to play in the NFL.

In addition to the practical aspects of the program, Ingram always takes a personal mentorship approach to the kids he works with and instills the values of integrity and respect in them.

“You can’t teach a kid until you can reach a kid,” Ingram said.