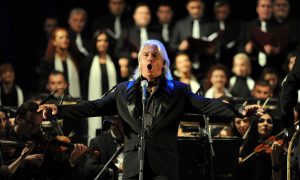 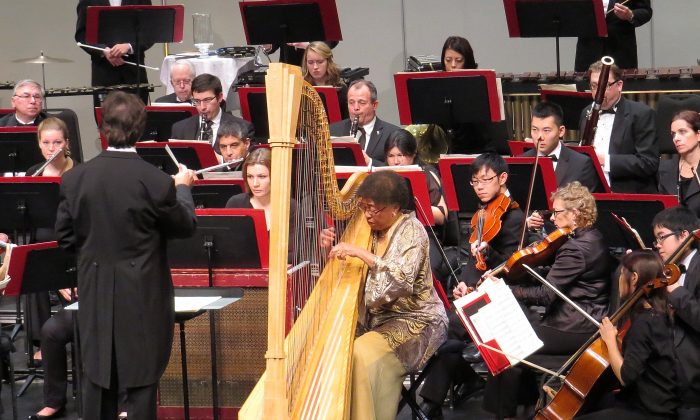 TORONTO—The harp, one of the oldest instruments known to man, has been found in ancient cultures around the world, and in the West has often been associated with angels, going at least as far back as the Old Testament.

On Nov. 14, Ontario’s Flato Markham Theatre resonated with the sound of the harp, an instrument so beautiful that it is considered to be divine.

“It’s a very soothing instrument,” said Ann Hobson Pilot, one of the most renowned harp players in the world. Pilot, who retired in 2009 after an illustrious 40-year career with the Boston Symphony Orchestra, performed with the Kindred Spirits Orchestra that night.

“The harp is a mysterious instrument,” said Maestro Kristian Alexander, the orchestra’s conductor and artistic director, his eyes lighting up. “It is something very special, very unique.”

Known for his timeless film scores, including the famed “Jaws” soundtrack, as well as “Harry Potter” and “Schindler’s List,” Williams worked with Pilot for 30 years, and offered the retirement piece to her as a gift.

This was the first time Williams had written a harp concerto, and Pilot said she felt honoured to collaborate with him during the composition process.

“It’s a challenging piece, especially with all the rhythm changes, but it’s always fun to play,” she said, adding that the most rewarding experience of her long career was playing the piece with the Boston Symphony Orchestra in 2009 at Carnegie Hall.

“You have to be very imaginative when you play, especially the first movement, and you have to use a lot of colours,” she said.

“[In the first part] it’s supposed to be like a willow tree, so there’s a lot of trills and wispiness, like branches of a willow tree. The second movement is called ‘On Birches,’ and he’s had a vision of a little boy swinging from a birch tree, so it’s very rhythmic, and very live and energetic and he said he wrote it to celebrate me. So it was a real honour.”

While Pilot offered a more contemporary feel with Williams’ impressionistic music, Campbell adopted a more traditional approach with his concerto, taking inspiration from Haydn, Mozart, and Schubert to bring a neoclassical style to the stage.

His piece, called “Atonement,” is divided into three movements and depicts man’s relationship with God. In the first movement, people struggle with their problems, in the second, they find peace with God, and in the third they celebrate the joy of finding Him.

In his approach to conducting the Kindred Spirits Orchestra, Alexander has also adopted a joyful yet challenging approach.

“The way we see the orchestra—as musicians and me as the music director—we see it as family where we can grow together, we can learn from each other, we can make enough space so that we can appreciate each other’s achievements,” he said.

“We push the orchestra and the musicians always to the extreme of their abilities in a very nurtured and positive environment,” he added, noting that this gives them a great sense of satisfaction.

The orchestra and its conductor also pride themselves in promoting Canadian and contemporary music, often working with internationally renowned artists such as Pilot and Christina Petrowska Quilico.

Epoch Times is a sponsor of the Kindred Spirits Orchestra’s 2014/20015 season. For more information and upcoming concerts, visit: www.ksorchestra.ca