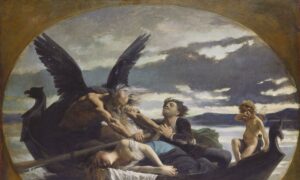 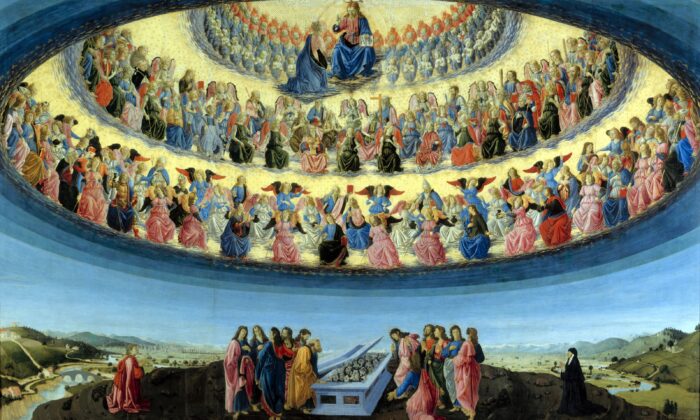 Heavenly Ascension: ‘The Assumption of the Virgin’

In the lower third of the painting, we see the 12 apostles of Jesus. They stand next to an open casket on a hill that overlooks Florence, Italy. The casket contains not a body, but instead lilies—the flowers often associated with Mary’s purity.

Dressed in red and kneeling in devotion to the left of the apostles is the poet and apothecary Matteo Palmieri. He is the patron who commissioned the painting for his funerary chapel. Kneeling to the right of the apostles is his wife, Niccolosa. During the Renaissance, patrons often had their likenesses depicted in divine scenes to show their own devotion and piety.

Above the earthly scene, Botticini has depicted the heavens opening up, where, at the top, sits Jesus. He holds a book that has the Greek symbols for “Alpha” and “Omega.” Mary kneels at his feet to receive his blessing.

In the heavens, Botticini also includes the three orders of angels proposed by the Christian theologian and Neoplatonic philosopher Pseudo-Dionysius the Areopagite of the late fifth or early sixth century.

The 9 Levels and 3 Orders of Angels

Pseudo-Dionysius the Areopagite wrote the treatise “On the Heavenly Hierarchy.” He suggests that every good thing comes down from God. While we humans struggle to know God directly, we can be led to know God indirectly through the appropriate symbols that make his mysteries intelligible to us.

These symbols can be shared with us by way of angels. There are three orders of angels with three levels in each. The angels pass down those good things from God, with each group of angels below interpreting the message of the group above. One purpose of the hierarchy is to have humans assimilate, as much as possible, with God.

The first order of angels, that is, the highest order, contains the following types of angels: Seraphim, Cherubim, and Thrones. The second order contains Authorities, Lordships, and Powers. And the third order, which is the order closest to humans, contains Angels, Archangels, and Principalities.

Let’s return to Botticini’s painting to see how he depicted these angels. He divided them into three registers that correspond to the three orders. Let’s start at the bottom register and ascend.

Angels, depicted in pink robes and having orange and black wings, are the ones shown closest to the earth and are at the very bottom of the hierarchy. They are considered the heavenly beings who deliver God’s messages to the world.

The Lordships, Powers, and Authorities are in the middle register. Depicted in white robes and with pink wings edged in black, the Lordships possess freedom in God, a freedom bound in goodness that is without subservience to anything that is not God.

Powers have blue robes and blue wings edged in red; they are courageous and unflinching for God. In black robes and with red wings edged in blue, Authorities give direction and provide order according to divine law.

The Seraphim, Cherubim, and Thrones are the highest order and closest to God. Seraphim are depicted as babies’ heads with red wings. They constantly move around God and, in their attempt to assimilate with God, elevate those things subordinate to them. They, without interruption, dance around and sing praises to God.

What might this image mean for us today? What type of wisdom might we extract from this work of art?

The angels at the top are shown as having a baby’s head with wings. They have no bodies and spend all of their time contemplating the vision of God and dancing and singing the praises of God.

Does the fact that these angels have a baby’s head suggest the lack of influence the world has over them? Can we ascend in heaven if we suspend the desires of our bodies and spend more time singing the praises of and contemplating the vision of the divine?

Maybe the lilies in the casket are not only symbolic of Mary’s purity but also indicative of the purity that results from the death of bodily desire, a death that results in heavenly ascension.

Either way, several things stand out to me about the orders of angels. One thing is that all three ranks are necessary. Each rank and each angel fulfills a duty, and the ones above give willingly to the ones below. This is a hierarchy based on loving, contemplating, and sharing understandings of the divine.

Secondly, differences are maintained even in heaven. There isn’t one type of angel doing one type of thing, but there are multiple angels, each with different characteristics and different interpretations of divine wisdom.

Maybe this is one way that we often fail to accomplish divine will on earth. In heaven, it seems that different beings with different defining qualities and different understandings of the divine share their understandings to gain a deeper connection with the divine.

Are we open to the type of growth that requires us to share, not force, divine understandings so that we too may ascend?