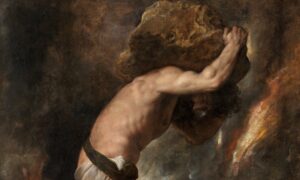 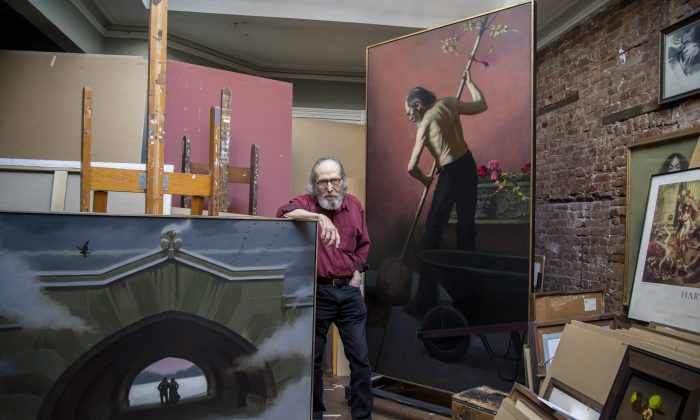 NEW YORK—Harvey Dinnerstein waited at the bottom of the stairs of his Brooklyn brownstone, contemplating the darkness of the interior space. Since a broken washing machine flooded his home nearly a year ago, there has been no electricity and no water. The rooms were gutted, save for his studio on the top floor. We walked up the dim stairwell, past narrow hallways that doubled as storage space for his life-size portraits and large figure paintings. At the top, in the studio, diffused light filtered through a skylight, casting soft shadows on the space overflowing with paintings, with only small passageways to walk through.

Dinnerstein took the flooding in stride. None of his paintings were damaged, and reconstruction would finally be starting the next day. He plans to continue painting in a temporary residence a mile away until his home is fully renovated. In the meantime, the Brooklyn-born artist (1928) has deeper issues and questions to ponder.

In a supplement to the latest retrospective of his work, “Underground Together: The Art and Life of Harvey Dinnerstein,” he wrote: “Time moves inexorably. Another turn of the wheel, and I find myself in this ninth decade of my life, contemplating past and present.”

A leading figurative painter, Dinnerstein’s oeuvre bridges the 20th and 21st centuries. In retrospect, he realizes that he keeps revisiting familiar themes—intimate scenes of his family, his wife, and himself, everyday city life, the seasons, and mythic conceptions. He revisits these subjects and themes not to repeat them, he said, but hopefully to bring in other perceptions that interest him.

His paintings evoke universal qualities of humanity—birth, life, and death—and bring up timeless questions: Who are we? Where did we come from? Where are we going? They depict the human condition, the rich variety of people, and their particularities, as seen through his eyes.

Dinnerstein didn’t want to talk specifically about what he is currently working on. Without missing a beat, he said, “Of course, if I talk about it, I won’t do it.”

While his paintings speak for themselves, he readily shares his creative process in great detail with his students and in books written about his work. He also talked at great length about the interwoven aspects of his paintings in a lecture he gave at The Academy of Art University in San Francisco in 2009, which can be viewed on YouTube (ept.ms/DinnersteinTalk).

A Realist With Thirsty Eyes

Dinnerstein survived as a realist artist through the height of modernism in the 1940s, abstract expressionism in the 1950s, and the various ensuing forms of postmodernism. He was not alone. He grew up and studied with precocious kids who became lifelong friends and serious artists. They learned from each other, studying great masters in museums as opposed to the modernist theories and Bauhaus methods of instruction that dominated art schools at the time.

“Somehow, time erases, and there is a fragility to everything that I’m especially aware of as I get older,” Dinnerstein said, “so I like to mention their names to remind people.” He mentioned eight of his artist friends who are no longer with us—Herb Steinberg, Robert White, David Levine, Aaron Shikler, Sheldon “Shelly” Fink, St. Julian Fishburne, Stuart Kaufman, and Seymour Remenick—and the two who continue to paint today, Daniel Bennett Schwartz and Dinnerstein’s friend of 75 years, Burton Silverman.

The 2011 documentary “The View from Here: The Artists of ‘A Realist View’ and Their Art 50 Years Later” features the group reflecting on their efforts to reassert realism as an ongoing tradition with their 1961 exhibition, “A Realist View.” It was hardly noticed by the general public and didn’t seem to make much of an impact at the time, but there was something singular in what they were trying to achieve that would leave traces for others to pick up in subsequent years.

Despite the overwhelming predominance of modernism in the 20th and 21st centuries, people who knew about the Realist View artists regarded them highly; they had persevered. Today, Dinnerstein remains fascinated by succeeding generations of young artists who are also inspired by the humanist traditions of the past.

“We all survive, don’t overlook that,” Dinnerstein said. For inspiration, he still turns to antiquity, the Renaissance, and later 19th-century naturalist and realist artists—Rembrandt, Honoré Daumier, and Degas, to name a few. Without any nostalgia for the past, he maintains a deep appreciation for the richness and legacy of Western visual culture. The painting “The Raft of the Medusa” by the 19th-century French painter Théodore Géricault is just one example of a piece that has inspired him. He admires the way Géricault depicted an actual event at the time in a way that transcended the moment.

During the civil rights movement, in 1956, Dinnerstein and Silverman went to Montgomery, Alabama, to witness the bus boycott. Dinnerstein’s wife, Lois, who was a nascent art historian at the time, went along with them as a reporter. Dinnerstein said they saw it as an opportunity to connect with a tradition of 19th-century artists and illustrators who dealt with contemporary events in a graphic way. He mentioned Daumier as an example.

Dinnerstein and Silverman created 70 drawings in about 2 1/2 weeks, including one of Rosa Parks by Dinnerstein. “It was formative,” he said. “The drawings that I did were mostly incidental and reportorial. I think they were effective, but at some point I started to realize that it wasn’t enough just to record incidents. One had to reach beyond the narrative, beyond the moment, for something deeper, more transcendent … to some other level of perception.

“It was the beginning of a way of thinking that affected many of the things that I would do later,” he said.

Dinnerstein is clearly concerned with craft and with representing the human form realistically. His skill eventually caught up with his ambition. “The biggest challenge,” he said, is “to have a visual idea that’s personal, relevant to myself as I see the world around me.”

One of his more recent and most captivating paintings, “Sundown, The Crossing” was initially sparked by a study sketch he had made of an abandoned ferry docked in Staten Island in the late 1950s. Much later, after re-reading the Walt Whitman poem “Crossing Brooklyn Ferry,” he embarked on that painting. It includes 28 figures and a monkey that he had sketched and painted over the decades. It’s not an illustration of the Whitman poem, but a reflection of the artist’s personal journey related to the spirit of the poem. It’s striking how the figures in the painting confront the viewer like a mirror image of our humanity.


He always carries his sketchbook with him and has learned a great deal about drawing by sketching while in transit. He showed me a drawing on a manila envelope that he used to protect his sketchbook, “my Sikh cab driver with a turban, a few weeks ago,” he explained. He continues to capture fleeting faces and figures and then relies on his memory to express their characters, their states of mind, and their spirit, with just a few lines.

How does he do it? “It is difficult to explain,” he said. “It is being open and having an insatiable curiosity [for] everything that is happening. That’s a small part of it.”

A painting recently exhibited at Gerald Peters Gallery on the Upper East Side of Manhattan this past May and June, titled “Underground Drum Beat,” shows a medley of strangers, each alone in their own thoughts but riding the train together for a brief period of time. Anybody living in or visiting New York City can immediately identify with the experience Dinnerstein has captured in that painting. Seeing it enhances one’s experience of riding the subway.

“The vast diversity of humanity in the city, more so today than ever, seems to me especially focused underground,” Dinnerstein wrote in the catalog supplement. He often inserts himself in his paintings, as an observer and witness.

A relatively recent self-portrait of him planting a tree—with some flowers and a butterfly in the background, a wheelbarrow in the foreground—stood on the floor behind him. “I’ve never planted a tree in my life,” he said. But he has in this painting. It’s life-size, like most of his portraits. “I do them in this space. It’s kind of crazy with all this stuff in here,” he said.

When I mentioned that the size of his studio looks much bigger in his paintings. He replied, “Art is a lie that tells the truth,” and chuckled. Our eyes can deceive us sometimes. Dinnerstein’s insatiable curiosity—his thirsty eyes—have given way to creating an abundant oeuvre of paintings revealing things we may easily overlook.

Dinnerstein has taught numerous students at the School of Visual Arts (1965–1980), the National Academy of Design (1975–1992), and at The Art Students League of New York (1980–present). His work is in many private, corporate, and museum collections, including the Robert Lehman Collection of The Metropolitan Museum of Art, The New Britain Museum of American Art, the Martin Luther King Jr. Labor Center, Spencer Museum of Art at the University of Kansas, and the Whitney Museum of American Art.

Two of Dinnerstein’s paintings are currently on view at the Gerald Peters Gallery in Manhattan until July 28, 2017.

The Spark and Wisdom of Artist Burton Silverman

Sculptor Sabin Howard in Service of Something Bigger
TOP NEWS