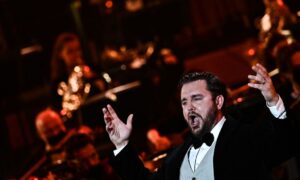 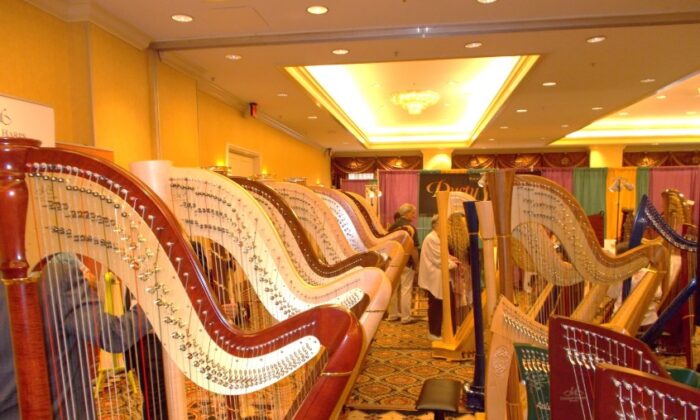 Harps for sale in the exhibition hall of the 41st National Conference of the American Harp Society in New Orleans. (Courtesy of Michael Kurek)
Performing Arts

I cannot remember the first time I took notice of a harp, but I must have been a very small child. In those days, it was not uncommon to see a symphony orchestra on television, and my eyes invariably went to the harp, the most exotic-looking thing on the stage, at least until the long-haired conductor came to the podium. The harp would usually be given its turn to shine, both visually and musically, in a fantastical waterfall of tones.

And then there was “Mickey and the Beanstalk,” a segment of Disney’s 1947 film “Fun and Fancy Free,” with its Golden Harp character—a beautiful, singing woman whose back was somehow attached to the column of a harp. The role was beautifully sung by a popular teen star of the day, Anita Gordon. What a mesmerizing instrument! Famous for the harp, of course, was also Harpo Marx, one of the Marx Brothers comedy team, who wasn’t faking it! He could actually play the harp pretty well.

Composing for the Classical Harp

In more recent years, though I do not play the harp, I have been commissioned by members of both the American Harp Society and The World Harp Congress to compose harp music to be played at their national and international conferences. I have immensely enjoyed attending these conferences. The sight of rows and rows of glistening, often gilded harps (some in natural wood or black lacquer) all lined up in the vendor hall is magical to see. It is only matched by the sight of several hundred harpists who, unlike their counterparts who play other instruments, seem to float around the conference halls, as if they themselves have been transformed by playing the instrument.

I have enjoyed composing for the harp, partly because (and I’m only half joking) it is almost impossible to compose anything that sounds really bad on a harp. However, it turned out that there is a pretty steep learning curve to write down its music, with many more notes and several special notational symbols not used for other instruments.

As you look at a harp, you see a row of vertical strings that must be plucked, and you wonder how harpists know which string goes with which note. Not only that, it is not as easy as it might appear to properly pluck a high-tension harp string to get a good professional tone out of it.

Close inspection reveals the secret that the seven C strings, one in each octave, are red and all the F strings are black or blue, which harpists use to orient their hands when placing them on the instrument. But exactly how far to leap to distant strings to play other pitches depends on muscle memory and peripheral vision, since harpists must also read their sheet music and cannot always look away from it to their hands.

My respect, even awe, for the art of playing the harp grew even more when I learned that not only must both hands simultaneously pluck the strings on either side of the instrument, but there also are seven pedals, which both feet are frequently pressing up or down to one of three positions. The one D pedal, for example, simultaneously re-tunes all seven of the D strings (one in each octave) to flat, sharp, or natural tunings, until that pedal is changed again.

The harp has just seven strings for each octave, analogous to the white keys on the piano. To get a “black key” note, the pedals must be changed, and then perhaps changed back right away. The only other standard instruments that use both hands and feet to actually sound additional notes are the pipe organ, which also has pedals, and the rock/jazz drum set. The coordination required to use all four appendages, hands and feet, quite independently is not unlike the rest of us trying to pat our heads and rub our tummies at the same time, but times two!

Perhaps no other musical instrument has evolved through so many versions, from David playing the harp to soothe the spirit of King Saul to the small, hand-held lyres from the ancient Greeks, to the modern pedal harp that matured to more or less its present form in the late 19th century.

Several varieties of smaller Celtic and folk harps still exist today, and they are more popular than ever. The modern classical concert grand harp I’ve been discussing is the big one, around six feet tall, with 47 strings and about six and a half octaves in range, just a little less than the piano.

We do not find much use of the harp in the Classical era by composers like Mozart and Haydn, nor even in Beethoven nor, still later, Brahms. But many other mainstream Romantic-era composers readily adopted the instrument. One thinks of all those luscious harp solos in Tchaikovsky’s ballets, for example.

But to hear the full showcase of what a modern concert grand pedal harp can do, I would recommend listening to a good harp concerto, like the sumptuous Concerto for Harp and Orchestra in E-flat Major, Op. 74 by Russian composer Reinhold Glière (1875–1956). Though composed in 1938, it lies squarely in the tuneful, 19th-century Romantic tradition.

Wolfgang Amadeus Mozart wrote only one piece for the harp, his Concerto for Flute and Harp in C major, K. 299 from 1778, but it is completely delightful and regarded by harpists and audiences alike as a great contribution to the harp repertoire.

If you start to look for it, you’ll notice how many times harps pop up in classic films, either on screen or in the score. One of the most notable of the latter is the use of nine harps (count ’em, nine!) in Bernard Herrmann’s gorgeous soundtrack to the 1953 movie “Beneath the 12-Mile Reef,” where they create an underwater paradise. Likewise, Herrmann used the harp to paint the sea in the 1947 film “The Ghost and Mrs. Muir.”

Notable among the harp’s on-screen appearances, also from 1947, is the stunning performance of a harp solo by Cary Grant (as Dudley the angel) in “The Bishop’s Wife,” also starring Loretta Young and David Niven. The hands you see on the strings, though, were not those of Grant, but of Denzil Gail Laughton (1921–1985) who was best known as a jazz harpist but did a great deal of playing for film and television. Laughton’s hands were photographically substituted for Cary Grant’s with what appears to be some skill for the technology of that day.