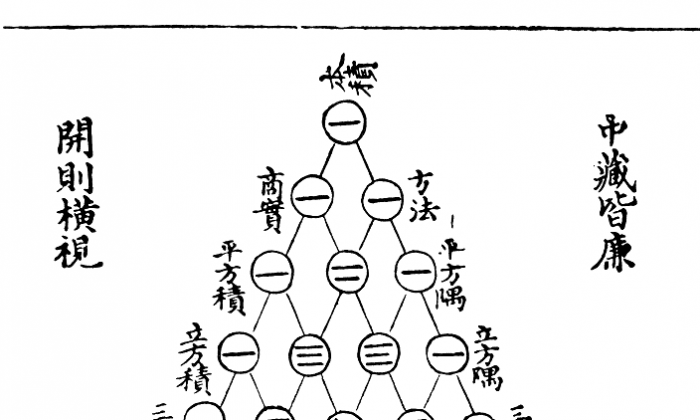 Harmony Among Men, Mastery of Math in the ‘Three Character Classic’

The text’s rhythmic, short, and simple three-character verses allowed for easy reading and memorization. This enabled children to learn common characters, grammar structures, lessons from Chinese history, and above all how to conduct oneself.

Begin with filial piety and fraternal love,
and then see and hear.
Learn to count,
and learn to read.

Units and tens,
tens and hundreds,
hundreds and thousands,
thousands and tens of thousands.

The Three Forces
are Heaven, Earth and Man.
The Three Luminaries
are the sun, the moon and the stars.

The Three Bonds
are the obligation between sovereign and subject,
the love between father and child,
the harmony between husband and wife.

Begin with filial piety and fraternal love, and then see and hear.
— Three Character Classic

After teaching young readers the fundamentals of being a good child and sibling, the Three Character Classic devotes a good amount of text to the basics of mathematics and numbers.

But it does more than teach kids how to solve “one plus one”. While teaching counting, the Three Character Classic associates each number with a fundamental piece of knowledge about nature, geography, society, and culture.

According to the ancient divination text I-Ching, there are three forces or “talents” in our environment – Heaven, Earth, and Man. The person who knows all three well is an all-rounded individual.

There are three sources of light that illuminate our skies – the sun, the moon and the stars. There are four seasons, and four directions – North, South, East and West.

The numbers serve as a useful memory aid, helping kids collate and remember lists like the five elements and the seven emotions in Chinese culture.

Numbers are such fundamental things that even young children know them by heart. But when did the Chinese develop numerals, and how much did they achieve in their numeration system and mathematics?

The Origins of Chinese Numerals

According to Chinese legend, the number one (一) was invented by Fu Xi, the first mythical emperor of China, over 5,000 years ago. The remaining numbers were created about 500 years later by Cangjie, the inventor of Chinese characters.

Shortly after, Li Shou, a historian for the Yellow Emperor, developed the decimal numeration system where ten tens are one hundred; ten hundreds are one thousand; and so on.

Legends aside, the earliest physical evidence of Chinese numerals dates back to the Shang Dynasty (14th century BC), over 3,000 years ago. Chinese numerals were found carved on tortoise shells and flat cattle bones – also known as oracle bones.

This system proved extremely efficient, and Chinese mathematicians were able to compute square and cube roots of numbers to several decimal places. By 500 AD they had obtained the value for pi to 3.14159267, one thousand years ahead of their European counterparts. They were also the first to discover and prove “Pascal’s Triangle” – 300 years before Pascal was born!

The Three Bonds are the obligation between sovereign and subject, the love between father and child, the harmony between husband and wife.
— Three Character Classic

Among the “sets of three” that the Three Character Classic teaches are the Three Bonds or Three Relationships – the relationships between ruler and subject, between parent and child, and between couples.

One historic person who handled the three relationships well was Xu Yun, military general for the State of Wei during the Three Kingdoms Period. However, Xu Yun very nearly failed to achieve this, if not for his intelligent wife.

When he was a young man, Xu Yun was match-made to Lady Ruan, the daughter of Ruan Gong. But after the wedding ceremony, Xu Yun was shocked to see how plain and unattractive his new wife was under her wedding veil. He refused to enter the bridal chamber, and to the chagrin of his family, asked for a marriage annulment.

It took a fair amount of convincing by Xu’s family before Xu entered the bridal chamber. But upon seeing his bride, Xu could bear it no longer and turned to leave. Knowing that he would not return, his wife stopped him by pulling on his robes.

To embarrass his wife, Xu Yun said derisively, “Out of the four feminine virtues – feminine character, skills, speech, and appearance – how many do you possess?”

His wife replied, “What I lack is simply beauty. A scholar should have one hundred virtues. How many do you possess, my husband?”

Xu Yun said proudly, “All of them.”

His intelligent wife continued, “Character is the most important for all walks of life. My lord, you desire good looks, not good character. How can you claim that you have all the virtues of a scholar?”

Xu Yun was deeply ashamed after hearing his wife’s words. He changed his attitude and henceforth showed the greatest respect toward his wife. He eventually rose through the ranks to become a loyal military general, and raised two sons who also became government officials.