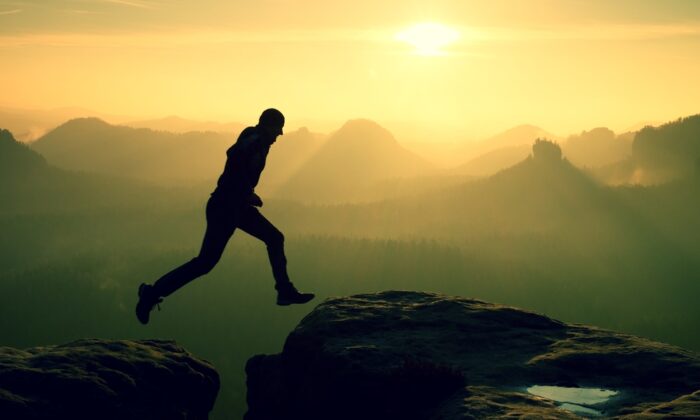 Endurance and tenacity can be learned through practice. (Rdonarphotos/Shutterstock)
Family & Home

A certain quote has been making the rounds on social media this past year. Its pervasiveness is an indication of its relevance. Of unknown origin, the quote reads: “Hard times create strong men. Strong men create good times. Good times create weak men. And weak men create hard times.”

It’s an accurate description of the cycle of prosperity and regression in society, one that has held true throughout the ages. It was echoed by Cyrus the Great when he conquered the rich and abundant soil of Persian rulers. Instead of occupying the fertile ground of his conquered foe, Cyrus opted to remain in the mountainous terrain of his home, saying, “Soft lands breed soft men; wondrous fruits of the earth and valiant warriors grow not from the same soil.”

The 21st century has largely been one of enjoying the fruits of our forebears. We are content with luxuries and accustomed to abundance, rarely questioning the source or transitory nature of our good fortune.

Many of us have relatives who lived through hard times. They save every dollar, scrape every morsel from their plates, and admonish us for any waste. We find their behavior odd, even comical at times, but they know better than us that prosperity doesn’t last. When hardship does arrive, they’ll be prepared, while the wasteful will be left wanting, unaccustomed to austerity.

In light of present circumstances, it would be wise to remember the inevitability of discomfort and adopt, out of choice, a habit of fortitude and self-discipline, before it becomes a necessity. Grit, tenacity, and endurance are skills that can be learned and honed through purposeful practice. They allow us to thrive with little material means at our disposal.

We may well be coming to the end of a prolonged period of “good times.” This isn’t pessimistic or defeatist. Quite the contrary. Through this challenge, we can forge ourselves into the worthy inheritors of our ancestors. But turning the tide toward liberty and prosperity requires a fortitude that has been dormant in this generation.

When a largely passive population is seemingly oblivious to the authoritarian controls adopted by traditionally democratic countries, it’s up to the strong to reaffirm our humanity by living authentically and truthfully. This is the first and most important step in society regaining its bearings. It is the primary attribute of the “strong man,” and the foremost revolutionary act.

Alexander Solzhenitsyn, Soviet concentration camp survivor and author of “The Gulag Archipelago” championed the role of the individual in resisting authoritarianism: “You can resolve to live your life with integrity. Let your credo be this: Let the lie come into the world, let it even triumph. But not through me.”

In this day, when certain inalienable truths are taboo and only sanctioned narratives are deemed acceptable for public discourse, the individual who dares to seek and speak the truth displays a strength and character much needed in these times. Indeed, it’s no small thing to act with virtue and integrity in the face of external pressure to do otherwise.

The 20th century is rife with examples of authoritarian control and tyrannical actors on the world stage. These tendencies are in the human DNA, ready to bubble to the surface unless they are kept at bay by the clear-minded and courageous. Those who are willing and able to take up the challenge of the times are given the opportunity to become the “strong men” needed to usher in the next wave of prosperity. Courage is contagious and the ripple effects of noble action are the seeds that change society from the inside.

As Solzhenitsyn reminds us, “The simple step of a courageous individual is not to take part in the lie.”

In the end, integrity, forbearance, and faith are the attributes of a worthy existence on this earth. These virtues don’t manifest readily in times of ease, and we should be grateful for the opportunity to embody them.

Jordan Peterson, a great admirer of Solzhenitsyn, has been imploring this generation to find its strength and tilt the scales in favor of retaining our hard-earned freedom. His book “12 Rules for Life,” contains many passages relevant to the internal and external battles of our age.

He writes, “To stand up straight with your shoulders back is to accept the terrible responsibility of life, with eyes wide open. It means deciding to voluntarily transform the chaos of potential into the realities of habitable order.”