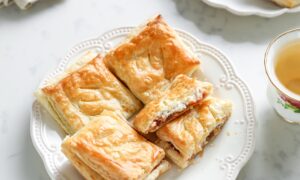 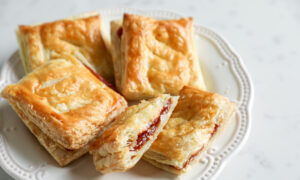 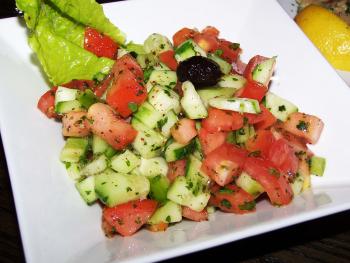 By Nadia Ghattas
Print
Sandwiched between Chelsea and the Upper West Side of Manhattan is Hell’s Kitchen. It lies between 59th Street and 40th Street, between Fifth Avenue and the Hudson River. It was once a dangerous place to visit but has now become a comfortable neighborhood and home to a new generation of young professionals and local business owners.

The run-down buildings have been converted to luxury high-rise and doorman-buildings. The area is now full of locally owned shops, wine bars, bakeries, ethnic eateries, and restaurants as well as other shops. A few weeks ago a new addition to ethnic food in the area, Hanci Turkish Cuisine, became part of the neighborhood.

According to chef and owner Yakup Karatas, Hanci means “the innkeeper.” Karatas also told me that he came from Bolu, a province by the Black Sea in the northwestern part of Turkey, located midway between Ankara and Istanbul. Bolu is famous for its dense forests and hot springs. The Seven Lakes and Lake Abant are among its beauties and wonders. It is also known for its excellent cooks.

Turkish cooking is as sophisticated as French and Chinese cooking is, but with a different spin to it. It is diverse, yet simple, healthy, vibrant and tasty. Karatas very proudly told me that he applies the traditional Turkish cooking style and uses only fresh ingredients—meats and produce.

Whether a vegetarian, a fish or meat lover, there is plenty for all.

Karatas, (formerly with the Turkish Kitchen, Sahara, Intercontinental Hotel), told me that he wanted to bring his traditional cooking to New York for people to enjoy. That is indeed reflected in his eclectic and diverse menu which has many traditional dishes starting with meze (appetizers), soups, fish, lamb, chicken, yogurt, bread, and traditional deserts made in-house.

For a small place, the menu is appealing with a long list of delicious dishes. There is a two-part meze, the main course and dessert.

From the cold meze we had the amazingly fresh Cabon Salad ($7-$12), finely diced tomatoes, cucumbers, parsley, green peppers and onions, tossed in olive oil and fresh lemon juice. I have traveled throughout the Middle East and had similar salads prepared with vegetables fresh from the garden, and that is how this felt and tasted. We also had Hummus ($6), chickpea and Tahini paste which was excellent.

Whether you are in Turkey or in a Turkish restaurant, one must have eggplant, since Turkey is known for its eggplants and leeks, which are cooked in a variety of ways. So we had two different eggplant dishes, the Patlican salad known as Baba Ghanouj and Soslu Patlican, sautéed, chopped eggplant with spicy sauce of fresh tomatoes and green peppers ($7). From the hot meze, we had the Cigara Boregi, phylo scrolls stuffed with feta cheese and fried in vegetable oil ($6), and an order of lightly fried crispy calamari ($8). Although fried, they were very light and perfectly cooked. A perfect complement to those appetizers is a mixed grill platter, a combination of lamb, beef, and chicken Kebab (marinated and cooked on revolving skewer) which was excellent ($21). The meats were of excellent quality and the marinade gave it that extra flavor that was very enjoyable. Desserts have always been an important element in Turkish cuisine. There are different types, such as the milk-based desserts like Keskul or the world’s famous pastry-based desserts baklava. I had the “Kadayif” (made from shredded pastry and cheese, baked and served in syrup).

Overall, it was a very pleasant culinary experience. The food was delicious, satisfying and the service was excellent. Most importantly, the price is right—reasonable.

There is a four-course lunch special with complementary coffee or tea for only $13.95.