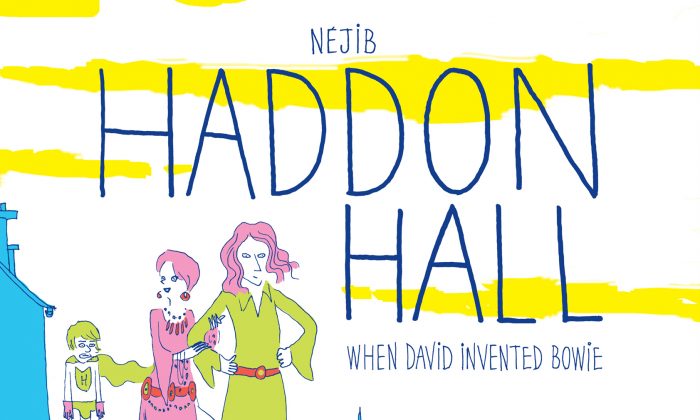 “Haddon Hall, When David Invented Bowie”, is a charming semi-fictional account of the late rock legend’s formative years. It is a graphic novel, a book of evocative swirling cartoons, in which Tunisian-born artist Néjib draws inspiration from the graphic designers of the late 1960s and 1970s to tell his tale.

The novel explores Bowie’s time in Haddon Hall, a rambling south London Victorian house that has now been demolished. In the late 1960s Bowie moved in with his then girlfriend and future wife Angie.

The book explains how they adored the house’s “discreet decrepitude”, the property becoming the base for the creative experimentation that resulted in “The Man who Sold the World” album and later the ideas for the Ziggy character.

The novel is written from the perspective of the house whose eccentric charms nurtured the creative processes and bore witness to the comings and goings of a range of key collaborators and influences including Marc Bolan, Tony Visconti and Syd Barrett.

Epoch Times caught up with Paris-based Néjib, who explained some of the inspiration for the book that was originally published in French in 2012, and has just recently been translated and published in English.

Néjib was a teenager when he first discovered Bowie. His brother bought the “Ziggy Stardust” album and from that day he became a fan. As he grew up he became more of an admirer than a fan. “I mean a fan has no distance, he is blinded by his fetishism. Bowie for me is a great artist, but some of his work can be criticised,” he said.

The narrator in the book is the house, Haddon Hall, which appears as some kind of living and organic entity, whose dusty hallways are delighted to witness the birth of Bowie. Talking about this narrative device, Néjib said: “It shows that the story is a fiction, a fantasy. It brings something fantastic and strange to the story. It is also a way to say that this house is a step for Bowie: this moment I describe is a stage in his life; he is close to what he has to become.”

So much has been written about the years of Bowie’s various successful incarnations as a superstar, yet less so about these early years. For Néjib those formative times are of most interest.

“I am more interested by fragility and doubt than success and fame,” he explained. “I love the idea of the artist who is still ignoring what he will be, but the reader knows. It is also a period where Bowie is more close to us, more human in his interrogations and doubts.”

While much of the content is factual, there’s a fine line, an artistic licence that naturally comes with the genre, Néjib explained. “It’s a fiction, a portrait of the artist before his explosion. Many facts are true but I have condensed all these facts and stories in one place. Like Bowie, I use the false, the fiction, to tell the truth – I try, at least.”

By this he means Bowie used masks, identities and theatre to express what he wanted to express about life, death and so on. Thus, Néjib weaves fact and fiction to tell his story.

For example, the moving narrative surrounding Bowie’s concern for his mentally ill brother Terry, who he rescues from an oppressive psychiatric hospital to stay with him at Haddon Hall, is true. As is his friendship with kindred spirit Marc Bolan, who soon went on to stardom himself with his band T.Rex.

On the other hand a trip with John Lennon to the docklands is fictional. Here a disillusioned Lennon discusses high art, meeting with “true artists” Stockhausen and Nabokov, and how he has wasted his genius on a lower form of art. But then “low art is for the proles” like the two of them, Lennon muses.

“The scene with Lennon is an invention,” said Néjib. “But the depression of Lennon is a real event. He was lost at the time, after the Beatles split, and there were many existential questions he hadn’t solved. I wanted to show something true: Lennon was the big brother, the guide for all that generation. That is the sense of this meeting.”

In one story in the book, Bowie goes to Malta to pick up an award then develops a long-term fear of flying thereafter due to the stormy flight. Néjib says that Bowie really did develop this fear on a bad flight, but we don’t know which one. He also actually went to Malta to receive a trophy for the song “Space Oddity”.

“It’s a good illustration of how I mix the stories and the facts to make fiction,” explained Néjib.

One of the revelations in the novel is the impact of Stanley Kubrick’s film “A Clockwork Orange”, a portrayal of stylish and violent youth sub-culture in a dystopian future. Viewing the film is something of a lightbulb moment for Bowie leading to a drastic stylistic makeover.

“The film was an important inspiration for the first style of Ziggy Stardust. Many photographs show Bowie and the Spiders (his backing band) dressed like the guys in the movie,” Néjib said, stressing how much this dark vision of society made an impression on Bowie: “It’s the moment when Bowie gave up the hippy vision of the world for a more pessimistic one,” he said.

“Haddon Hall” is a stunningly illustrated volume that combines humour, pathos and fantasy in the story telling. Néjib extols the virtues of the cartoon medium. For him it is a unique way to recreate a period without the expensiveness of a film. He believes it is a great medium because, unlike cinema, it has very few constraints in building a visual world.

Another quality of the cartoon for Néjib is that “the drawing is a distance, a point of view in its self”.

“It doesn’t pretend to be objective. By the drawing, the reader is at once involved in a subjective way of telling a story.”

Néjib admires the great illustrators of the late 1960s and early 1970s such as: Saul Steinberg, Ronald Searle, William Steig and the artists of Push Pin Studios. The film “Yellow Submarine” had a great influence too.

“I tried to be close to the freshness and freedom of these drawings, and the pop sensibility of the colours. I think they describe very well that moment: the gap between the 60s and the 70s, the end of utopia, the end of that summer of love.”

Néjib would like to be seen as “a modest portraitist of a great artist”. He dedicates Haddon Hall “To the man who illuminated my life. R.I.P.”