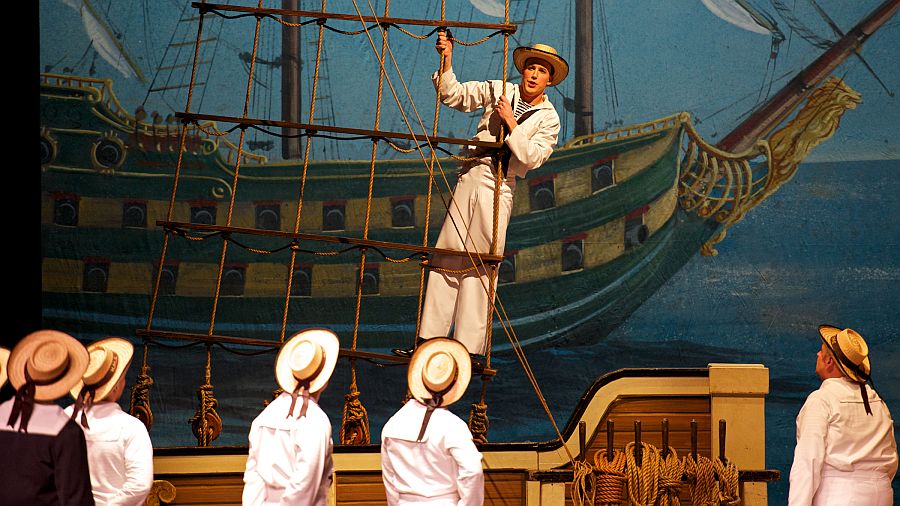 Cameron Smith as Ralph Rackstraw (played by Daniel Greenwood in the reviewed production) and a chorus of sailors in the New York Gilbert & Sullivan Players production of “H.M.S. Pinafore.” (William Reynolds)
Arts & Culture

NEW YORK—I spent New Year’s Eve, as I often do, at the New York Gilbert & Sullivan Players. From the melodic overture, the audience knew it was in good hands. Albert Bergeret was conductor and director, and while I have a few qualms about his stagecraft, his way with the music was magisterial.

The troupe was founded by Albert Bergeret in 1974 and is still going strong. The operetta performed was the perennial favorite “H.M.S. Pinafore” (one of the G&S big three, along with “The Mikado” and “The Pirates of Penzance”).

“H.M.S. Pinafore or, The Lass That Loved a Sailor,” like other G&S Players’ productions, has a full orchestra, first-rate scenery (by Albère), costumes (by Gail J. Wofford), lively choreography (by Bill Fabris), and a large cast.

The plot involves several romances that must overcome certain hurdles before the inevitable happy ending. Ralph Rackstraw, an able seaman on the Pinafore, is in love with Josephine (Captain Corcoran’s daughter). The problem is that she has been promised to the elderly Sir Joseph Porter (First Lord of the Admiralty). She arouses the ire of her father when she reveals her preference for a crewman on the Pinafore.

Little Buttercup (a peddler of odds and ends) is smitten with the captain. Again, class distinctions interfere with true love.

The best singing came from the romantic leads

Sir Joseph arrives with a female retinue of his sisters, his cousins, and his aunts. He sings of his ascent from office boy to ruler of the Queen’s Navy in the patter song, “When I was a lad.” (Lyricist and scriptwriter W.S. Gilbert was poking fun at the first sea lord, William H. Smith, who obtained the position despite his lack of experience with sailing.)

Sir Joseph tries to overcome Josephine’s resistance to him by telling the young woman that “love levels all ranks.” Instead of concluding that she should marry up, she interprets his statement to mean that she is free to marry down, in other words, sanctioning her love for Rackstraw.

Josephine plans to elope with Rackstraw, but her father learns of her plan from the malicious Dick Deadeye and scuttles it. Sir Joseph also seethes with anger when he finds out about Josephine’s rejection of him in favor of a sailor and orders Rackstraw to be locked up.

Little Buttercup then reveals that she had been a “baby farmer” (a reference to the practice of taking in babies or young children for payment). During her time caring for Rackstraw and the captain, they were exchanged. Thus, since at that time in England (according to librettist Gilbert) birth was everything, the two men switch positions.

As a result, Josephine is free to marry Rackstraw and the captain to wed Little Buttercup. Even Sir Joseph finds romance. His cousin Hebe claims him in marriage.

The best singing came from the romantic leads, Daniel Greenwood (who has a sweet tenor voice) as Rackstraw and Kate Bass as Josephine. Angela Christine Smith was cute as Buttercup, and David Auxier (who also serves as dance captain) was Captain Corcoran. James Mills was light on his feet as Sir Joseph and handled his famous patter song with aplomb. Louis Dall’Ava was amusing as common seaman Dick Deadeye, who can’t help being evil because he is saddled with a villainous name.

The look of the opera was traditional, but there were some updated jokes about cell phones and Sting’s “The Last Ship.” Bergeret even interjected himself into the action while he was leading the orchestra.

The production contained too much mugging for my taste, though I heard a little boy seated behind me giggling throughout the performance. In fact, Gilbert & Sullivan operettas are ideal family fare.

The performance included a champagne toast and everyone joining in for “Auld Lang Syne.”

The G&S Players will be back with a production of “The Gondoliers or, the King of Barataria” May 15–17 at NYU’s Skirball Center for the Performing Arts.