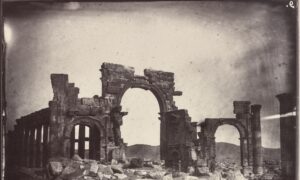 Armchair Culture: There’s No Need to Isolate Yourself From Great Art and History
0 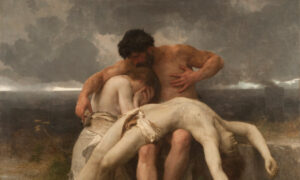 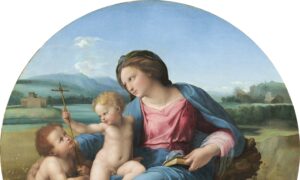 How Raphael, ‘The Prince of Painting,’ Wholeheartedly Captured Humanity
0 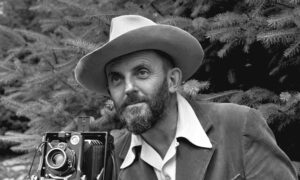 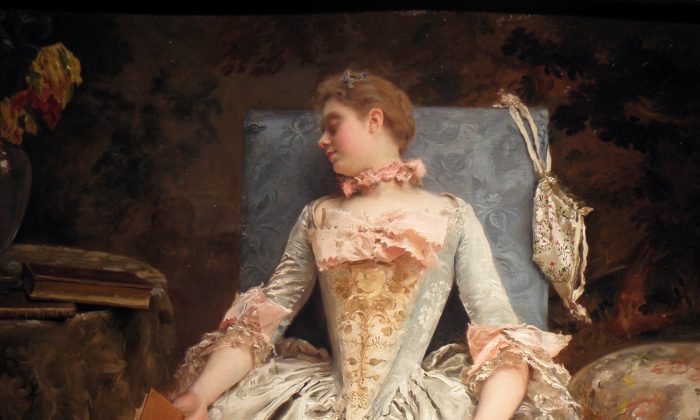 Gustave Jean Jacquet (1846 – 1909), is known among scholars as one of William Bouguereau’s top students.  Although Jacquet’s subject matter was not of peasant girls or mythological scenes like Bouguereau himself or many of his other students, Jacquet quickly gained fame and notoriety for his technical virtuoso, his paintings of women, both strong and delicate, as well as historical genre scenes of women and soldiers in 16th, 17th, and 18th century costume. He painted large works on canvas with life size figures, though more often enjoyed working on smaller pieces on panel. His models were not always classically beautiful, but they were always vibrant and full of life.

Jacquet was born May 25, 1846 in Paris, France. He first exhibited in the Salon of 1865 at the age of 19, with two works, La Modestie, and La Tristesse. His career took off at the starting line and in 1867 he drew attention for his painting of Call to Arm. In the Art Journal of 1907 it mentions that it was around this same 1867 date that art critic M. Edmond said “Behold an artist, unknown today, who will be celebrated tomorrow.”  It was shortly after this that his painting of Sortie de Lansquenets was purchased by the state and was put in the Chateau of Blois where it still remains.[1] He won a third class medal in 1868 at the young age of 22 with his painting Sortie d’armée au XVI siècle which was a military painting set in the 1700s. His military involvement was not relegated to painting soldiers however.  He was an avid horse back rider and served in the Franco-German War (July 1870 – May 1871) as a franc-tireur of Seine.  The franc-tireur of Seine was comprised of groups of volunteers who would ban together and fight independently of the organized military.  He also took part in the sortie under General Ducrot during the siege of Paris on October 21st, 1870, reportedly using some of the weapons and armor he kept in his studio as props.[2] While serving, he had the terrible experience of witnessing the tragic death of the horse sculptor, Louis-Alfred-Joseph Cuvelier.

After the war was over, he returned to his art and won a first place medal in the Paris Salon of 1875 with his painting of La Reverie, also referred to in his obituary as the Woman in Red …  strong, brilliant and attractive.” and in The Illustrated American as “a dark, intense looking woman, seated, full front, in an armchair, wrapping about her a long fur-trimmed robe of dark red velvet.”[3] This painting also won him a positive review from Edward Strahan, when it was later exhibited in the 1878 Exposition Universelle:

His painting, as full of sweetness as of science, is mounted equally on two epochs. He prepares observations on present things and plunges them into the past…. He culls the good out of every age…. He steals from the Venetians the splendor of flesh and the beauty of tissues. He takes from the Spaniards the firmness of line and the warmth of their tone. He bears off from the gallant painters of the eighteenth century their melting shapes, their graceful light and flowery color. Every master can teach him something, down to Bouguereau, in whose atelier he received his education….

1878 was also the year he exhibited Joan of ARC Praying for France at the Paris Salon, a piece that won him additional acclaim. It is likely that the impact of these two great paintings in combination with his earlier pre-war successes was why he was made a Chevalier of the Légion d’honneur in 1879. William Schaus, a well-established picture dealer, purchased both these paintings. Reverie for a time was hung in the Metropolitan Museum of Art, New York, and Schaus presented the other piece, Joan of Arc Praying for France, as a gift to the French government. [4]

Jacquet’s career was solid and he exhibited regularly at the Paris Salon through the year of his death and even in 1910 after his death with two works Portrait de Mme B., and À la Santé ! .  It seems probable his wife entered it for him, knowing he would have wanted them to be shown. Although he was married, very little to nothing is known about his family life. It is not known whether or not he had children, siblings, who his parents were, or even his wife’s name.

His most frequently used model, was really his muse, as he used her in an unusually large portion of his paintings. She was not a classically attractive woman by modern standards, though Jacquet must have thought otherwise. When compared to the portrait of his wife, they do not appear to be the same individual. There are some who have assumed it to be a mistress; though it is possible it is his daughter as she does first appear in his paintings at a young age. There is also some possibility it is a second wife, as so very little is know. About the repeated use of this model one critic noted “ The painter used one model so consistently for his heads, for some years, that, sweet as she was, she became insipid by iteration.”[5]

Paintings by Jacquet are housed in many public and private institutions throughout America and Europe, including French institutions in Blois, Chateau-Thierry, Rouen, and Paris. In England, works can be seen in the Sheffield Galleries & Museums Trust, Manchester City Galleries, Brighton and Hove Museums and Art Galleries. Also, in American museums such as The Brooklyn Museum of Art, The Chrysler Museum of Art, Cincinnati Art Museum, and The Figge Art Museum.  It is a shame however that some works by this artist have been de-accessioned from museums, the officials responsible being miss-educated in the artist’s importance and dismissive of the value the works hold to posterity.

A lot of this de-accessioning was done, as with other important paintings from the period, throughout the 1960s and 1970s.  Sadly The Art Institute of Chicago de-accessioned one of Jacquet’s most important works as recently as 2007.  It would have been thought that by now museums would have stopped the practice of selling these paintings. In the 60s, when they were frequently de-accessed, it was a miss-understood period. Today however, 19th century European Paintings are one of the fastest appreciating categories in the art market, and as far too many of these works have already been lost from our museums, the practice should end.

The piece in question, titled Welcome, was sold for $361,000 at Sotheby’s New York, October 23rd 2007. In the Sotheby’s sale’s catalogue it mentioned that Robert de Montesquiou, thought “ work such as Welcome comparable to the best by Watteau, Edgar Degas, Albert Besnard, and Giovani Boldini; their draftsmanship, he felt, could not be compared with Jacquet’s security in his science of making art” and that the “shivering satins and shining of dresses… seem like a refrain from a poem made up of lingerie, lace, …weapons, armor and old musical instruments.”[6] The work first exhibited at the Paris Salon of 1892, was well received in New York’s Brandus Gallery in 1898 attracting much positive attention, and even appeared in The New York Time’s Illustrated Magazine pictured next to Rembrandt’s The Man with a Cane. [7]

In the Illustrated American’s, September 10, 1892 issue an unknown author said “The charms of woman, in face, figure and expression, have in modern time no more faithful and fervent depicter on canvas or paper then Gustave Jacquet”[8] He was a collector of old arms and armor of which he was reported to have had one of the best collections in all of France.  After his death in 1909 when much of the estate was put up for auction at the Galerie Georges Petit, over 300 lots of authentic 18th century costume pieces as well as armor, weapons, and other objects surfaced as being from his private collection.[9]  Although a cataloging of his paintings has never been undertaken, he was quite prolific with roughly 200 unique works coming up for public auction since the mid 1980s. It is surprising so little is known about this productive and well-established artist.

Here a fine painter, a gentleman, and a delicate artist disappears. These losses are particularly sensitive in such times as ours, where the great figures of yesterday are rare and the famous figures of tomorrow are not yet defined nor completely devoted.

We were not just to Gustave Jaquet. After great success, we pretended not to see him, this painter of elegance, only as an outdated teacher who “had his time”. In truth, there was no career more constant, or a better painter in the technical sense as Gustave Jacquet.…Jacquet was not rough, nor loose, nor did he want to appear ignorant of his job. He must have had great courage to devote himself to the difficult task of painting grace with originality and to do it well while, disdaining what passes easily to others as original.

Gustave Jacquet had an ideal of kindness. He did not think the paint was made to terrify or provoke. These scenes can move us deeply by many different means as is their nature. If Courbet is truculent and lavish, if Delacroix reflects our terrors, our fevers or our pain, then Gustave Jacquet is welcome to pass before our eyes and perhaps rejuvenate a little, the soft and elegant appearances of old. And anyway, it is better to be like him; graceful, outgoing, and friendly without effort, then lamenting, violent and brutal, and to have faith that other people are basically strong and sweet.[10]