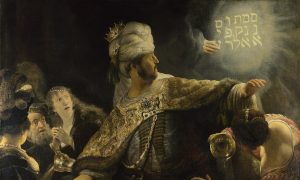 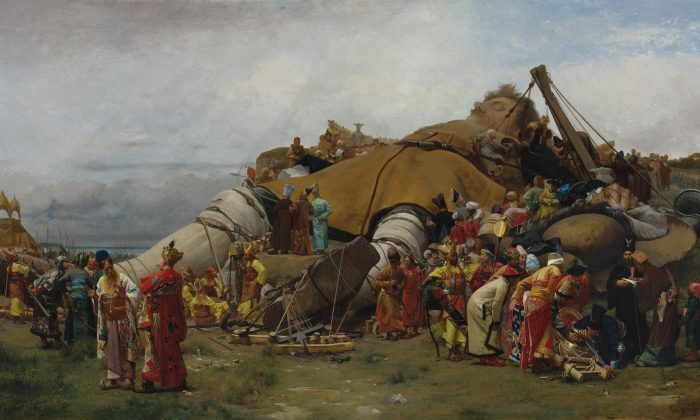 “Gulliver and the Lilliputians,” circa 1886 by Jehan-Georges Vibert. Oil on Canvas, 22.25 inches by 43.25 inches. Private Collection. (Public Domain)
Literature

Throughout our lives, we all come into contact with some who support us and push us to be our best selves, as well as others who are hostile and want us to fail. What are we to do in a hostile environment?

Gulliver, from “Gulliver’s Travels,” a book written by Jonathan Swift in 1726, finds himself dealing with all kinds of people with varying attitudes as he travels. The book is divided into four parts, but only the first part will have a purpose for our current discussion.

The first part deals specifically with his voyage to Lilliput—a nation of six-inch-tall and, appropriately, small-minded people.

Gulliver, after his ship wrecks in a violent storm, swims to the nearest shore and sleeps on the grass. He awakens to find himself tied to the ground with Lilliputians climbing on top of him.

Compared to Lilliputians, Gulliver is huge. However, despite their differences in size and native languages, Gulliver convinces the Lilliputians through body language and submissive demeanor that he is a good and kind person. The Lilliputians accept him into their nation.

The Lilliputians grant Gulliver his freedom because of his benevolence.

But the nation’s people also have plans for their new giant friend: They want him to help them defeat the neighboring Blefuscu in battle. The Lilliputians and Blefuscudians have been warring for many moons because they crack eggs differently. The king of Lilliput wants Gulliver to bring the Blefuscudian fleet, currently preparing for battle, to his shores. Gulliver agrees and attaches cables to the Blefuscudian fleet and pulls them to the Lilliputian shore without causing any harm.

The emperor of the Lilliputians is filled with glee; he then wants Gulliver to bring all of the Blefuscudian fleet to his shores so that he can rule them and force them to crack eggs in his preferred way.

Gulliver responds, “I would never be an instrument of bringing a free and brave people into slavery.”

In time, the Blefuscudians send ambassadors to Lilliput to negotiate peace and agree to terms that benefit the Lilliputians.

However, the Lilliputian Skyresh Bolgolam, has hated Gulliver since the giant’s arrival. He tries to convince everyone that Gulliver is treacherous, and is able to finally impeach Gulliver with crimes after Gulliver “makes water” to put out a palace fire. Skyresh Bolgolam uses all of Gulliver’s kind deeds against him, suggesting that Gulliver maliciously “made water” to put out the fire, that he did not destroy the Blefuscudians when he had the chance, and that he planned a voyage to the Blefuscu empire.

It is decided that Gulliver should be blinded as punishment for his treason. Gulliver has a decision to make. He considers destroying the Lilliputian empire, which would be easy considering his size, but he instead decides that it would be better to simply escape to the Blefuscu empire and let the Lilliputians peacefully live their lives.

Artist Jehan-Georges Vibert paints a scene from this story in his work titled “Gulliver and the Lilliputians.” We see Gulliver after his swim to shore, now sleeping. Workers are tying him with rope, the military stands all around him ready to attack, and the king talks to his council.

Vibert uses foreshortening to place Gulliver’s body in perspective as he lies on his back, and this helps show the difference in size between the Lilliputians and Gulliver.

Swift wrote “Gulliver’s Travels” as a satire on the 18th-century English government. But how might it be relevant for our contemporary culture?

When he appears to be a threat, Gulliver is tied to the ground by the Lilliputians but is let go when he is seen to be kind. Of course, we find that people are more likely to engage, share ideas and stories, and create new experiences with us when we are kind.

The practice of benevolence literally allows Gulliver to free himself from the ropes used to keep him anchored to the earth. We can transcend our situation when we search out our benevolent natures even in the face of those who wish us harm.

And, our benevolent natures can pull us forth to peace. Gulliver pulls a whole fleet ready for war to the shores of the enemy without hurting a soul, and his actions result in peace between warring nations.

His claim that he “would never be an instrument of bringing a free and brave people into slavery” indicates his benevolence, despite a king who demands otherwise. That is, Gulliver’s decision is based on principles found within himself instead of on rules issued by a worldly authority.

Last, Gulliver’s kind acts are used against him. Jealousy causes Skyresh Bolgolam to twist Gulliver’s deeds into acts of treason. Gulliver has the potential to easily destroy the whole Lilliput empire, but remembering the kindness of the king, he decides to escape and leave Lilliput untouched.

Is it possible in our divisive times to search within ourselves for our own benevolence toward those who would wish us harm? Is it possible for us to rise above the ideologies that divide us and search for truths that may elevate us beyond our selfishness? Can we be kind, help others, and when attacked, respectfully decline confrontation?

I’m hopeful that, like Gulliver, we can break through to our own benevolence and answer these questions with a resounding yes.