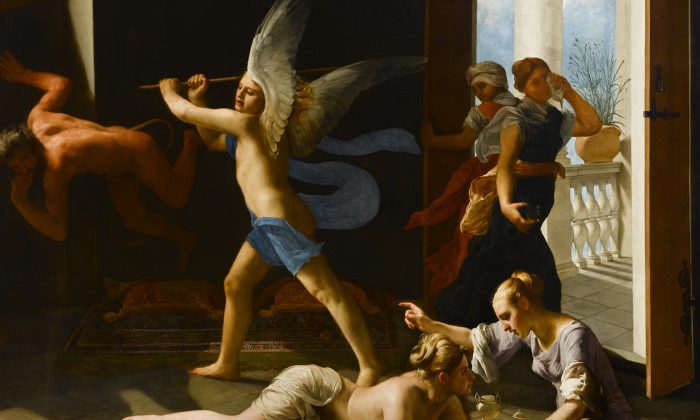 An absolute masterpiece exhibited at the Frick Collection
By Milene Fernandez

The Frick Collection is now exhibiting Guido Cagnacci’s masterpiece “The Repentant Magdalene” for the first time in New York, on loan from the Norton Simon Museum, until Jan. 22. It will subsequently show at The National Gallery in London (Feb. 15–May 21, 2017).

While very little is known about Cagnacci, an elaborate operetta could easily be conjured from the few snippets of his life that have been documented, mostly in Italian. Accompanying the exhibition is a book by Xavier F. Salomon, chief curator of the Frick, titled “The Art of Guido Cagnacci“—the first book on the artist written in English in nearly three decades.

A Most Unusual Magdalene

“The Repentant Magdalene” magnetizes all eyes in the East Gallery of the Frick. The longer one looks at it, the more it gives way to intrigue, delight, and contemplation.

“It’s really an extraordinary and bizarre picture,” Salomon said at the opening.

Cagnacci selected a scene in the biblical story of Mary Magdalene that had never been depicted before in a painting. He shows Magdalene as a wealthy courtesan, not during her meeting with Christ but in the moment after her initial shock and realization that her life had gone off track.

We see Magdalene on the floor in her bedroom coming to terms with her revelation, as she renounces her vices of lust and riches, and starts to repent. The composition focuses on Magdalene’s interaction with her pious sister Martha, who points towards the allegorical scene in the background of an angel (representing virtue) driving out a devil (representing vice).

On the right side of the background, one servant opens the door to let the light in, while the other reacts with tears upon seeing Magdalene nearly naked. Magdalene has thrown off her luxurious clothes and shoes, and has just torn off her jewels. Her pearls are rolling on the floor as she holds her broken necklace as if it were a rosary.

Magdalene’s face is reddened; her eyes are swollen. Her tears have subsided, as her sister Martha points towards the angel, indicating the new spiritual direction her life will soon take.

“It’s a consoling picture,” Salomon said. “Early descriptions refer to Martha as rebuking Mary. I think she’s consoling her rather than rebuking her.”

The sisters almost look like identical twins, indicating that perhaps Cagnacci used the same model to paint both figures.

The composition of the painting is most striking and unusual, guiding the gaze throughout the painting nonstop, from the central scene of Magdalene and Martha facing each other, to the angel driving the devil out of the picture on the left, to the servants by the balcony on the right. A cross current breeze enters Magdalene’s bedroom, moving the angel’s sash and a servant’s clothing in a harmonious, dynamic rhythm.

Cagnacci painted Magdalene’s ornate shoes and luxurious garment on the bottom left edge of the canvas with an unbelievable attention to detail. Yet he used less than half the layers of paint to render the faces of the servants and other parts of the background.


“It’s a picture that is partly about incredible still life painting, partly about this very sensual depiction of naked figures, with this androgynous aspect of the figure—very typical of Cagnacci. Part of it is history, and the other part is symbolic. It’s a great theatrical picture,” Salomon said.

A Life Fit for an Operetta

Cagnacci was born in 1601 in Santarcangelo, a small town in Romagna. He lived most of his life in the province of Rimini, known today for its beaches, and studied in Bologna and Rome. He looked up to some of the most important Italian painters of the time—Carracci, Guercino, and Guido Reni. He lived in Venice under the name of Guico Baldo Canlassi da Bologna, apparently to break away from his past.

His eccentric life may outmatch his bizarre pictures.

He never married, but was known for going around with women dressed as men—disguised as his workshop assistants to avoid public condemnation. Nobody knows if they were indeed his assistants, his mistresses, his models, or a combination of all three.

“He appeared on the scene for all sorts of misbehaving in Romagna in the 1630s and 1640s,” Salomon said. A key case is when he tried to elope with a very rich widow, a noble woman. She dressed as a man during their attempted escape, in the midst of which Cagnacci’s father denounced them to the police.

Not surprisingly, Cagnacci became estranged from his family. His father paid for his entire education, but later detracted that sum of money from his will, as well as the price of all the bed sheets Cagnacci had run off with.

There is a strange instance of another woman, who we know nothing about. She left all of her property to Cagnacci for no apparent reason, Salomon said.

Cagnacci reached the height of his artistry during the last five years of his life (1658–1663), when he lived in Vienna as a court painter for Emperor Leopold I. The emperor commissioned him to paint “The Repentant Magdalene,” among other great works.

Cagnacci had a workshop but no followers. His pupils were apparently good at making copies, but not strong enough to develop their own artistic language. His body of work includes about 50 original compositions as well as an unknown number of different versions created at an alarming rate. But among his works, “‘The Repentant Magdalene’ is his absolute masterpiece,” Salomon said.

Two other Cagnacci masterpieces can be seen in New York City: “The Death of Cleopatra” at The Metropolitan Museum of Art on Fifth Avenue, and his risqué “Dying Cleopatra” at the Italian Cultural Institute in New York—opening reception on Dec. 2 at 6–8 PM, on view until Jan. 19, 2017.