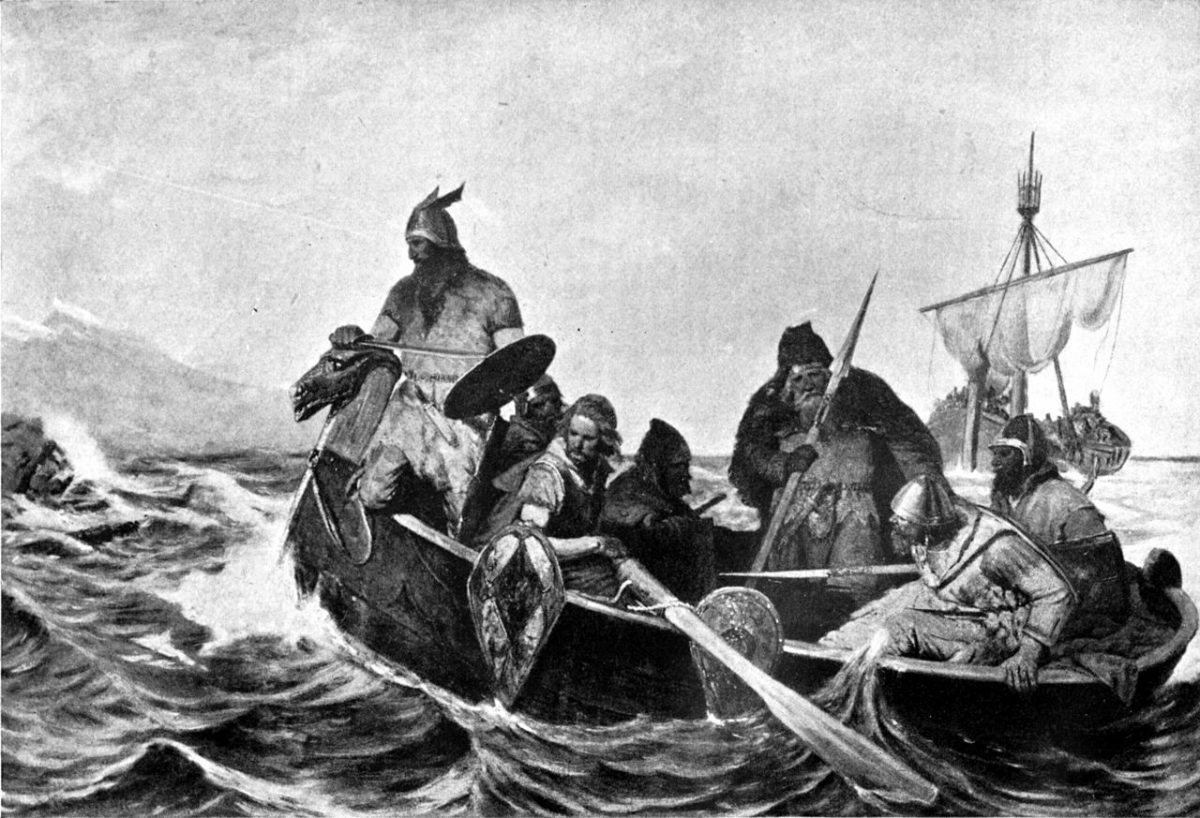 Guide to the Classics: The Icelandic Saga

Iceland has been in the news quite a lot lately, mainly because of its young soccer team’s outstanding performance in the Euro 2016 football tournament. And there has also been a surge of general interest in other aspects of Icelandic culture, including modern Icelandic literature.

Icelanders love books, both reading and writing them, and in recent years translations of contemporary Icelandic literature have made it into bookshops and literary pages abroad in increasing numbers. Nor must we forget that in 1955 the Icelander Halldor Laxness won the Nobel Prize for literature.

Back in the Middle Ages, Icelanders were great literary producers and consumers too. The term “saga” is used to refer to the new literary genre that developed in Iceland from the late 12th century up to the end of the 15th century and sometimes later than that.

“Saga” is an Icelandic word that means “something said, a narrative.” Originally, the term is likely to have been applied to stories that were probably formed and transmitted orally. Later, they came to be recorded in writing, in handwritten manuscripts, many of which survive to the present day, though a good number have perished over the past 500 years or so.

In terms of its structure, the Icelandic saga is usually a prose narrative, but in many cases contains a good deal of embedded poetry. With regard to its subject matter, the saga falls into several categories, and these allow it to be differentiated into generic sub-groups.

The Subjects of Sagas

Sagas of kings are historical biographies of the kings of Norway (and to a lesser extent, of Denmark) from prehistoric times into the 14th century. Although the antecedents of the first kings’ sagas were composed by Norwegians, Icelanders quickly became the masters of this genre, which usually contains much embedded poetry. This poetry is attributed to the court poets, or skalds, of these kings, whose compositions (mostly elaborate praise-poems) must have been passed down by word of mouth, in some cases over more than 200 years.

Most Icelandic saga writing was probably considered in the Middle Ages to be a form of history rather than fiction. This does not necessarily mean that the standards of modern historiography were applied to it, but what is narrated is likely to have been considered to be within the bounds of historical probability.

Coleridge’s “that willing suspension of disbelief for the moment, that constitutes poetic faith” might have applied in the consciousness of some audiences to some of the events and characters that appear in a subgroup of the saga that modern scholars call the fornaldarsogur (“sagas of the old time”), in which supernatural happenings abound. But other people would probably have considered such things to have been normal in the society of the pre-Christian age in Scandinavia and other prehistoric realms.

As for the Icelanders’ own history, that was the subject of several subgenres of the saga, including the best-known today, the so-called sagas of Icelanders or family sagas, as they are often known in English.

There were also the so-called contemporary sagas that tell of what happened in Icelandic society during the turbulent 13th century—in the middle of which Iceland lost its political independence to Norway—and sagas of bishops and saints.

From the 18th century, when saga translations first began to appear in modern European languages, sagas of Icelanders (family sagas) in particular have attracted foreign readers. There are now many English translations to choose from, in some cases multiple versions of a single saga.

The most widely accessible at present are probably the most recent Penguin translations, which are new editions of a five-volume series originally published in Iceland in 1997 as “The Complete Sagas of Icelanders.” These were prepared by a number of saga scholars in collaboration with Icelandic colleagues. Increasingly, there are saga translations available on the web, though their quality is not always reliable.

Sagas of Icelanders are about Icelandic families whose ancestors migrated to Iceland from Norway, the British Isles, and (in a few cases) other parts of Scandinavia toward the last decades of the ninth and the first three decades of the 10th century.

Some people have called the Viking Age and medieval Iceland the first post-colonial European society, and there are certainly parallels to be drawn with ideas from contemporary post-colonial studies.

Empire Writing Back to the Motherland

Icelandic saga writing can be seen in the context of the modern idea (first formulated by Australian scholars) of the empire writing back to the motherland, in this case Iceland “writing back” to Norway and to common Scandinavian oral traditions of poetry and story. In this process, medieval Icelandic authors created a new literary form.

The structure of saga narratives allows a number of different thematic and stylistic tropes to flourish. Many sagas of Icelanders are about feuds between families and their supporters; they give graphic accounts of fights, escapes, outlawry, and reconciliation. They detail complex legal procedures that, in the absence of a police force on the island, were the individual’s main recourse to justice, but only if he had sufficiently powerful supporters.

Some sagas, the so-called sagas of poets, detail the love lives and stormy careers of well-known skalds, off duty in Iceland from their careers at the Norwegian court. Others are more regional histories of families from certain parts of Iceland and their struggles with neighbors and with the supernatural inhabitants of their region.

Outlaws, Trolls and Berserkers: Meet the Hero-Monsters of the Icelandic Sagas

The saga form has often been compared to the modern literary form of the novel, but, though similarities exist, there are also important differences. Like the novel, the saga narrates a chronologically defined story, but as often as not, there is not one story but several intertwined narratives in a saga.

That may sometimes be true of the novel, of course, but saga strands do not always link up to the main narrative. They may just peter out when the saga writer no longer needs a particular character or line of narration. It is common for saga authors to explain that someone or other is now “out of this saga.”

Unlike the novel, the saga does not normally get inside a character’s skin to reveal his or her inner thoughts or psychological motives; rather, external actions ascribed to the character reveal something of his motivation, given the small-scale society described and its conventionalized behavior. For example, if a character puts on dark-colored clothes (rather than neutral homespun), then you can be pretty sure something important is going to happen, usually of an aggressive nature.

The stance of the saga’s narrating voice also differs from that of many narrative voices in the modern novel. The persona of the narrator is not omniscient, although he may reveal what the common opinion of a character or an action may be. Sometimes he will refer to dreams or what we would classify as supernatural happenings as indicators of what is likely to occur in the future or how a present action should be judged.

An example from Brennu-Njals saga, the saga of Burnt Njall, regarded by many critics as the best of the Icelandic family sagas, shows how the narrative voice in a saga can be heard obliquely.

At a certain point in this saga, a group of men involved in a feud decide to burn Njall and his family in their farmhouse, an act that was conventionally regarded as a heinous crime. Njall himself, old and prescient, with an understanding of true Christian values though he lived before the conversion to Christianity, lies down with his wife under an ox hide to wait for death, saying that God “will not let us burn both in this world and the next.”

When, after the fire, the couple’s bodies are discovered to be uncorrupted, the audience is left to draw the conclusion (assuming a medieval understanding of the Christian religion) that God has indeed saved Njall and his wife even though they were unbaptized. The conclusion here is, however, based on our knowledge of how medieval Christian audiences, for whom these narratives were written, would think.

It is not directly stated, and quite recently an American scholar, William Ian Miller, has repudiated the interpretation above for one of pragmatic realism: The couple did not burn because the ox hide protected them.

I think myself that Miller is wrong, and that the text contains ample clues of how the audience for which the saga was written would have understood it and how we should understand it today.

We do not know the names of their authors, and must recognize that the anonymity of those who created them has a literary point to make: Sagas narrate history, and that history belongs, if not to everyone living in Iceland at the time of writing (and to their modern descendants), then to specific families and other interest groups, whose ancestors figure in their stories. The authors shaped those stories but did not distort them.

Margaret Clunies Ross is emeritus professor of English language and early English literature at the University of Sydney. This article was previously published on The Conversation.