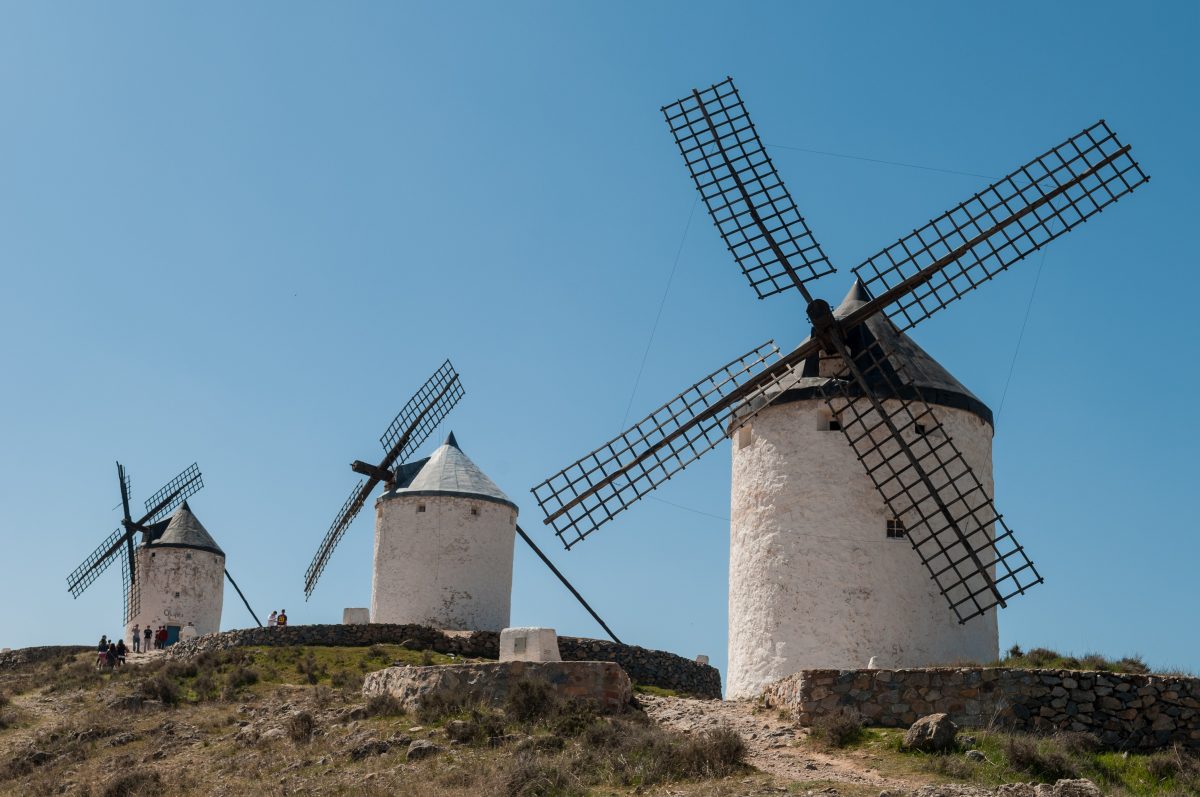 The windmills of Consuegra, Spain, made famous by Miguel de Cervantes in his "The Ingenious Nobleman Don Quixote of La Mancha." (Michal Osmenda/ CC 2.0)
Books

Guide to the Classics: ‘Don Quixote,’ the World’s First Novel and One of the Best

“Somewhere in La Mancha, in a place whose name I do not care to remember…”

This line, arguably the most famous in the history of Spanish literature, is the opening of “The Ingenious Nobleman Don Quixote of La Mancha” by Miguel de Cervantes, the first modern novel.

Published in two parts in 1605 and 1615, this is the story of Alonso Quijano, a 16th-century Spanish hidalgo, a noble, who is so passionate about reading that he leaves home in search of his own chivalrous adventures. He becomes a knight-errant himself: Don Quixote de la Mancha. By imitating his admired literary heroes, he finds new meaning in his life: aiding damsels in distress, battling giants, and righting wrongs—mostly in his own head.

But “Don Quixote” is much more. It is a book about books, reading, writing, idealism vs. materialism, life … and death. Don Quixote is mad. “His brain’s dried up” due to his reading, and he is unable to separate reality from fiction, a trait that was appreciated at the time as funny. However, Cervantes was also using Don Quixote’s insanity to probe the eternal debate between free will and fate. The misguided hero is actually a man fighting against his own limitations to become who he dreams to be.

Open-minded, well-traveled, and very well-educated, Cervantes was, like Don Quixote himself, an avid reader. He also served the Spanish crown in adventures that he would later include in the novel. After defeating the Ottoman Empire in the battle of Lepanto (and losing the use of his left hand, becoming “the one-handed of Lepanto”), Cervantes was captured and held for ransom in Algiers.

This autobiographical episode and his escape attempts are depicted in “The Captive’s Tale” (in “Don Quixote” Part I), where the character recalls “a Spanish soldier named something de Saavedra,” referring to Cervantes’s second last name. Years later, back in Spain, he completed “Don Quixote” in prison, due to irregularities in his accounts while he worked for the government.

In Part I, Quijano with his new name, Don Quixote, gathers other indispensable accessories to any knight-errant: his armor; a horse, Rocinante; and a lady, an unwitting peasant girl he calls Dulcinea of Toboso, in whose name he will perform great deeds of chivalry.

While Don Quixote recovers from a disastrous first campaign as a knight, his close friends, the priest and the barber, decide to examine the books in his library. Their comments about his chivalric books combine literary criticism with a parody of the Inquisition’s practices of burning texts associated with the devil. Although a few volumes are saved (Cervantes’s own “La Galatea” among them), most books are burned for their responsibility in Don Quixote’s madness.

In Don Quixote’s second expedition, the peasant Sancho Panza joins him as his faithful squire, with the hopes of becoming the governor of his own island one day. The duo diverges in every aspect. Don Quixote is tall and thin; Sancho is short and fat (“panza” means “pot belly”). Sancho is an illiterate commoner and responds to Don Quixote’s elaborate speeches with popular proverbs. The mismatched couple has remained as a key literary archetype since then.

In perhaps the most famous scene from the novel, Don Quixote sees three windmills as fearful giants that he must combat, which is where the phrase “tilting at windmills” comes from. At the end of Part I, Don Quixote and Sancho are tricked into returning to their village. Sancho has become “quixotized,” now increasingly obsessed with becoming rich by ruling his own island.

“Don Quixote” was an enormous success, being translated from Spanish into the main European languages and even reaching North America. In 1614, an unknown author, Alonso Fernández de Avellaneda, published an apocryphal second part. Cervantes incorporated this spurious “Don Quixote” and its characters into his own Part II, adding yet another chapter to the history of modern narrative.

Whereas Part I was a reaction to chivalric romances, Part II is a reaction to Part I. The book is set only one month after Don Quixote and Sancho’s return from their first literary quest, after they are notified that a book retelling their story has been published (Part I).

The rest of Part II operates as a game of mirrors, recalling and rewriting episodes. New characters, such as aristocrats who have also read Part I, use their knowledge to play tricks on Don Quixote and Sancho for their own amusement. Deceived by the rest of the characters, Sancho and a badly wounded Don Quixote finally return again to their village.

After being in bed for several days, Don Quixote’s final hour arrives. He decides to abandon his existence as Don Quixote for good, giving up his literary identity and physically dying. He leaves Sancho—his best and most faithful reader—in tears, and avoids further additions by any future imitators by dying.

The narrator of Part I’s prologue claims to write a sincere and uncomplicated story. Nothing is further from reality. Distancing himself from textual authority, the narrator declares that he merely compiled a manuscript translated by some Arab historian—an untrustworthy source at the time. The reader has to decide what’s real and what’s not.

“Don Quixote” is also a book made of pre-existing books. “Don Quixote” is obsessed with chivalric romances, and includes episodes parodying other narrative subgenres such as pastoral romances, picaresque novels, and Italian novellas (of which Cervantes himself wrote a few).

Don Quixote’s transformation from nobleman to knight-errant is particularly profound given the events in Europe at the time the novel was published. Spain had been reconquered by Christian royals after centuries of Islamic presence. Social status, ethnicity, and religion were seen as determining a person’s future, but Don Quixote defied this. “I know who I am,” he answered roundly to whoever tried to convince him of his “true” and original identity.

‘Don Quixote’ Through the Ages

Many writers have been inspired by “Don Quixote,” from Goethe, Stendhal, Melville, Flaubert, and Dickens, to Borges, Faulkner, and Nabokov.

In fact, for many critics, the whole history of the novel could justifiably be considered “a variation of the theme of Don Quixote.” Since its early success, there have also been many valuable English translations of the novel. John Rutherford and more recently Edith Grossman have been praised for their versions.

Apart from literature, “Don Quixote” has inspired many creative works. Based on the episode of the wedding of Camacho in Part II, Marius Petipa choreographed a ballet in 1896. Also created for the stage, “Man of La Mancha,” the 1960s’ Broadway musical, is one of the most popular reimaginings. In 1992, the State Spanish TV launched a highly successful adaptation of Part I. Terry Gilliam’s much-awaited “The Man Who Killed Don Quixote” is only the most recent addition to a long list of films inspired by “Don Quixote.”

More than 400 years after its publication and great success, “Don Quixote” is widely considered the world’s best book by other celebrated authors. In our own times, full of windmills and giants, its still-valuable message is that the way we filter reality through any ideology affects our perception of the world.

Ana Puchau de Lecea is a doctoral candidate and teaching associate and Vicente Pérez de León is an honorary fellow at the University of Melbourne in Australia. This article was originally published on The Conversation.